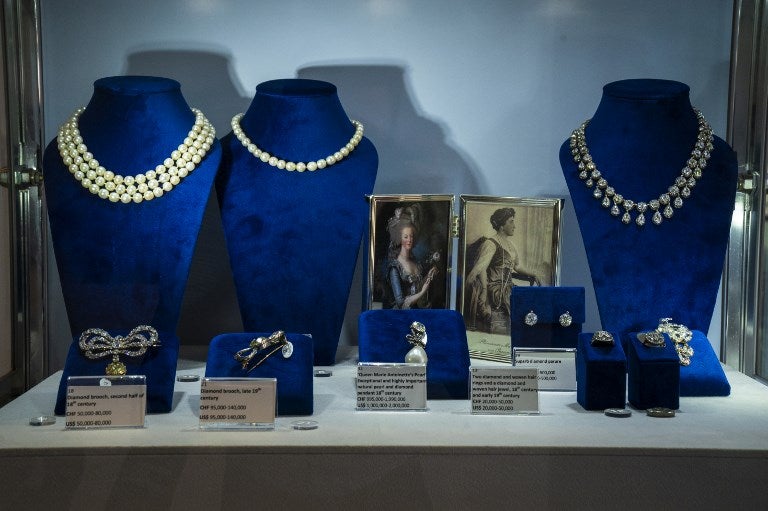 ‘Romance and magic’: Marie Antoinette’s jewels on show before auction

Marie Antoinette’s dazzling diamonds and pearls, unseen in public for two centuries, went on show in London on Friday before going on sale next month in one of the most important royal jewelry auctions in history.

The treasures were secretly whisked out of Paris in 1791 in the aftermath of the French Revolution and have been privately owned by relatives ever since.

The collection, held by the Italian royal House of Bourbon-Parma, is being sold by Sotheby’s auction house in Geneva on Nov. 14.

On show at their London headquarters, the lots include 10 pieces which belonged to Marie Antoinette, the last queen of France before the French Revolution. She was guillotined in Paris aged 37 in October 1793.

“The romance, magic and universality of her name is because she represents that sophistication of l’ancien regime. She is it,” Andres White Correal, Sotheby’s senior director of jewelry, told AFP.

“It is the sale of the 21st century. Because how do you top Marie Antoinette? Also because it’s so scarce. There isn’t much left.”

“The ring is a small diamond ring with a lock of her hair inside, with the monogram MA set with rose diamonds,” Sotheby’s jewelry specialist Benoit Repellin told AFP.

“The value of the diamonds themselves is very low but there is an emotional value and a historic value behind it.”

Spirited out of France

When King Louis XVI, his wife Marie Antoinette and their children tried to flee the French Revolution in March 1791, the royal jewels were smuggled out of the country into the trust of a confidant in Brussels.

They were then sent on to relatives in Austria and passed down through the generations.

“It is one of the most important royal jewelry collections ever to appear on the market and each and every jewel is absolutely imbued with history,” said Daniela Mascetti, deputy chair of Sotheby’sjewelryy Europe.

“This extraordinary group of jewels offers a captivating insight into the lives of its owners going back hundreds of years.”

He said there were queens with greater political and historical stature but Marie Antoinette “had the allure”.

The Bourbon-Parma sale also contains jewelry belonging to Charles X, the last monarch styled king of France, including a diamond tiara; jewels from Empress Marie Therese of Austria — Marie Antoinette’s mother — and from Austrian emperor Franz Joseph I, who died in 1916.

The collection has been exhibited in Hong Kong, Dubai and New York and will go on to Singapore, Taipei and back to Geneva where they will go under the hammer. MKH