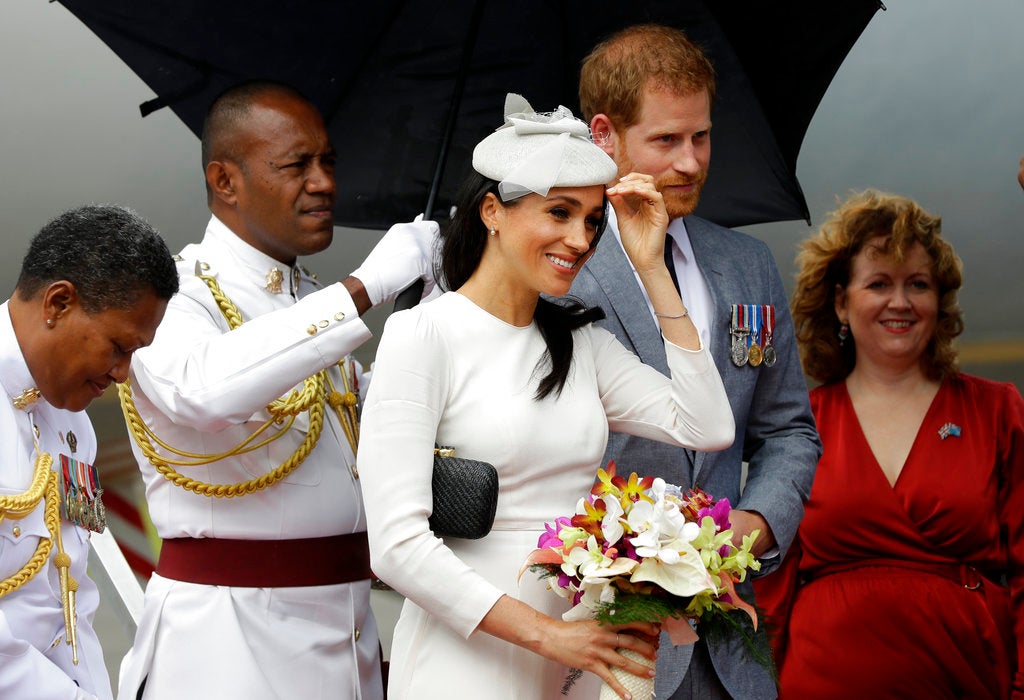 Britain's Prince Harry and Meghan, Duchess of Sussex on their arrival in Suva, Fiji, Tuesday, Oct. 23, 2018. Prince Harry and his wife Meghan are on day eight of their 16-day tour of Australia and the South Pacific.(AP Photo/Kirsty Wigglesworth,Pool)

SUVA, Fiji — The Duke and Duchess of Sussex were greeted by hundreds of flag-waving well-wishers on Tuesday after arriving in Fiji for a three-day visit as part of their tour of the South Pacific.

School children in uniform and people of all ages lined the streets and waved both British Union Jack and Fijian flags as Prince Harry and Meghan’s motorcade drove past.

The couple arrived from Australia, where Meghan, who is four months pregnant, had her schedule reduced in recent days after a hectic start to their 16-day trip across four countries. Meghan has not announced any plans to reduce her schedule in Fiji.

After stepping off the plane, Meghan needed to hold her cream-colored hat to prevent it from being blown away as Harry inspected a guard of honor. There was a light drizzle and an official held an umbrella above Meghan’s head.

The couple was scheduled to attend an official welcome ceremony at Suva’s Albert Park that will mirror one attended by Queen Elizabeth II and the Duke of Edinburgh in 1953. It was to involve traditional elements of Fijian culture, including dances and a kava ceremony. Members of the public are invited and 15,000 are expected to attend.

The couple was scheduled to attend a reception and state dinner Tuesday evening hosted by Fijian President Jioji Konrote.

Home to just over 900,000 people, Fiji is a former British colony that became independent in 1970 and later became a republic. Fiji remains a part of the Commonwealth group of countries and is a popular destination for tourists thanks to its warm climate and beaches.

The Centers for Disease Control and Prevention recommends that pregnant women not travel to a number of countries including Fiji and Tonga because of the presence of the mosquito-borne Zika virus, which can cause severe birth defects.

There is no vaccine for Zika, and the CDC says the best way to avoid infection for those who must travel is to take extra precautions to prevent mosquito bites.

The couple is scheduled to visit Tonga on Thursday before returning to Sydney on Friday night for the final days of the Invictus Games, Harry’s brainchild and the focus of their tour. The couple will then finish their tour with a four-day visit to New Zealand. MKH