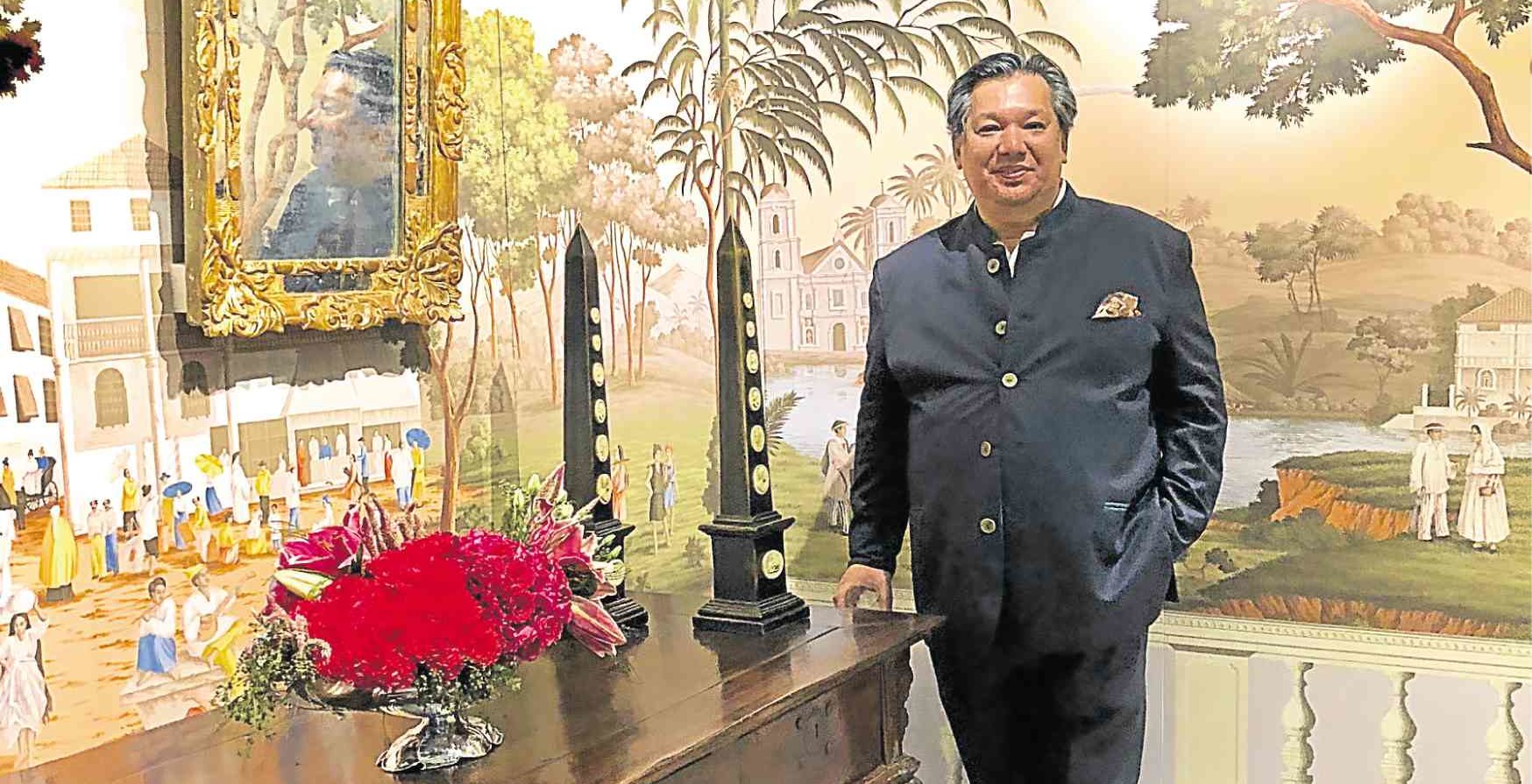 What Jonathan Matti has in common with Kate Moss now

Now you have something in common with Kate Moss, we told Jonathan Matti. Instead of showing false modesty, he replied, in his characteristic demure tone, his friends and clients are so familiar with: “Yes.”

Nothing to be coy about—it is a fact that Matti now shares a distinction with the famous supermodel. They have collaborations with de Gournay, the renowned luxury brand in home interiors noted for its hand-painted wallpaper and fabrics.

Founded 30 years ago by Claud Cecil Gurney in Paris, de Gournay is considered the maker of “antique interiors par excellence,” according to Christies.com, with its bespoke wallpaper and fabrics.

Matti designed a line of hand-painted wallpaper called “Latina Manila,” featuring images of mid-19th-century Philippines. This was the first time de Gournay has tapped a Filipino designer and the first time it is adopting a Filipino theme.

In 2017, Moss collaborated with the French firm on anemone designs for her bathroom.

Why did Matti choose 19th-century Philippines as inspiration for the hand-painted wallpaper?

“It was a most progressive time in the Philippines. The galleon trade had ended by the first quarter of the 19th century, and we had many foreign traders coming in to do business,” Matti explains. He found the images so stimulating that he almost saw them as a fantasy of a lifestyle to explore.

“The monopoly of Mexico with trade with the Philippines was finished. There were new people coming in. Trade was booming. With all these developments, life must have been beautiful and enchanting.”

He mined the masterpieces of the masters, such as Felix Resurreccion Hidalgo’s “La Banca” (which we used to see in its place of honor in the foyer of the residence of Dr. Eleuterio “Teyet” Pascual), Damian Domingo’s “Tipos del Pais,” Felix Martinez’s “The Card Players,” as well as old photographs and prints.

It was the creative director of de Gournay, Jemma Cave, who executed Matti’s concept.

Matti describes their collaboration: “From the concept came the collation of images, building up of the story, editing and more editing. The wonderful thing about de Gournay is that there are so many finishes and techniques to choose from and create, so that the design can be totally your own.”

Matti loved the wide range of options available to him, particularly in finishes. He says, “A few colorways available are amarillo, sepia, silver gray. Then you can do lacquering, intaglio, you can introduce any finish your heart desires.”

De Gournay goes a long way back with Chinese artisans who painted on wallpaper.

In an interview with Christies.com, Rachel Cecil Gurney, the founder’s daughter, traced the brand’s ties to China: “He was planning a trip to China, and thought that while he was there he might see if he could find someone to restore some antique wallpaper in his home because, of course, that’s where the original skill is. In the 17th and 18th centuries, wallpapers were made in China exclusively for export to Europe.”

This was 30 years ago. Claud Cecil Gurney repeated history, in a way, and worked with Chinese artisans and brought back hand-painted wallpaper to Europe from China.

De Gournay became the focal identity of antique interiors in many stately homes in Europe. The craftsmanship is exquisite, just like in pre-20th-century China.

Rachel further described it in the interview: “The wallpaper is usually made of painted Xuan ‘rice’ paper or a paper-backed silk onto which the design is painted. The background is typically painted in gouache, and then the design is meticulously painted on, using watercolor. Every detail and element of the design is first outlined in pencil—so if you look very closely at any of de Gournay’s wallpaper, you’ll see the pencil marks, which is obviously a sign that it’s handmade.

“When using a silk background, you first need to treat it using a glue so the color doesn’t bleed when it is applied. Once you’ve painted on the design, the final process is mounting the silk onto the paper, which is quite laborious. Our artisans tend to use the original two-brush technique: One brush is used to apply the pigment, and the other brush is dipped into water, which drags the pigment out. That gives the design a lot of depth.”

A de Gournay work is a masterpiece of detailing.

Even given this very old tradition of craftsmanship, de Gournay is able to contemporize itself.

In the same interview, Rachel cited its recent design: “One of our most popular designs is the Saint Laurent, with its peacock motifs, based on original 17th-century antique panels from Pierre Bergé and Yves Saint Laurent’s Paris apartment. We tried to make it look really authentic, hand-painting the rice paper and creasing it to give it an aged feel…”

In that way do fashion and home interiors blend in de Gournay.

It is interesting that the founder, Claud Cecil Gurney, has a certain affinity to the Philippines. When he was about 18 years old, he used to visit the Philippines for the wood carvers of Paete, Laguna, who produced chess sets for him. He would export the finely carved wood chess sets from Paete to Europe.

Also for a time, it is said, he was seeing a Filipina, one of the well-known socialites at that time, Lorrie Reynoso.

Matti’s acquaintance of de Gournay was, he puts it, “serendipitous.”

“I would pass by their showroom (in Paris) and order from them, when they didn’t have a distributor in the Philippines. But all that changed when they appointed Elements as their distributor so it made ordering easier. Then it was a serendipitous meeting in a trade show in London, when I ran into Jemma.”

That accidental meeting in 2016 led to immediate lunches and meetings where de Gournay invited Matti to conceptualize his wallpaper design.

Perhaps no other interior designer in the Philippines is a better fit for de Gournay than Matti because of the latter’s mastery of European old-world aesthetic. An Architecture graduate of the University of Santo Tomas, he focused on interior design through the years because people have been coming to him not only to have their homes built, but more so, to have them designed and decorated.

This must be because Matti has a fine eye and even finer taste for fine art and objects—he has a good and finely selected art collection himself. His edge over other interior designers is his ability to curate—to edit, specifically—a home’s art collection. That curatorial eye is evident in his own home.

Matti is good at designing an old-world ambiance, with tightly edited period furnishings (perfect rescue for matrons who get confused with their “Louis”)—without going over the top. His style could be described as old-world elegance but with the comforts of contemporary living.

Because of Matti’s longstanding relationship with Patricia Liang, the owner of Elements, the de Gournay’s “Latina Manila” is now available in Manila.

“I’ve known Patricia for years. She was operating out of her house when I first ordered fabrics from her. She had only one brand then,” Matti recalls.

“That one brand was taken away from her, so she searched for others and created Elements with Pilar Martinez Miranda. We have a very positive client-supplier relationship. The wonderful thing about Patti is she anticipates things, so before things go wrong she fixes them.”

His work with de Gournay opened the doors of stately homes in Europe, for Matti, quite literally.

He was invited to the Houghton Hall, one of England’s stately homes, at a dinner hosted by Lord David Cholmondeley, the seventh Marquess of Cholmondeley, and his wife, Lady Rose.

“De Gournay recreated the 18th-century wallpaper found in the cabinet room of Houghton Hall for Lady Rose,” says Matti. “To mark that collaboration, a dinner was hosted by The Marchioness Cholmondeley and Claud Cecil Gurney and Domenic Evans-Frecke of de Gournay. They invited designers, magazine editors and design enthusiasts from all over the world to see their latest creation. At that party, I met the Marquess and the Marchioness and we just happened to get along that we have stayed in touch.”

Yes, Matti is having not only a fine taste but also a fine year.