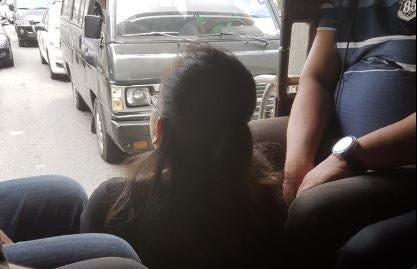 One woman found herself sitting on the steps of a jeepney and scolding its passengers when nobody gave up their seat for her. The moment was captured by 25-year-old Jonas Gan who shared the picture on Facebook last Oct. 8 with the question, “What’s wrong with the picture?”

According to Gan’s post, the woman sat in the entrance of the jeepney after she wasn’t able to find a good seat. “Then after, complained, saying out loud, ‘Wala man lang sa inyong gentleman.'”

Gan narrated that he called the woman out, asking her, “Buntis ka ba? PWD (Persons-with-Disability) ka? Senior Citizen ka ba?” which were the ones who are usually given priority seats in public transportation.

Gan’s questions seemed to have triggered the woman, as she retorted in anger, “Hindi pero BABAE AKO.”

What's wrong with this picture?…..The fact that she volunteered to sit there after she wasn't able to find a…

Gan, who is a feminist himself, said that he was triggered by the woman’s reply.

Gan eventually ended their exchange and told the woman, “Equality ang tawag  [diyan], ate” to which the woman replied with an, “Equality my *ss.” before stepping off the jeepney.

Gan told INQUIRER.net on Oct. 23 that he was on the way to work that morning when the exchange with the unnamed woman took place. “The incident happened along Buendia while I was en route to work. This happened in the morning around 9 [to] 10 a.m.,” he said. “The route of the jeepney I was riding was ‘LRT Buendia to Guadalupe.'”

As per Gan, the woman sat on the steps for around five to ten minutes. “She was seated there, she was continuously nagging and looking behind her, still expecting for someone to give up their seat.”

He said that the passengers with him felt uncomfortable, but seemed uncertain of what to do. “I could sense that they were uncomfortable [and] wanted to speak out but weren’t able to find the words to confront her.

On his end, he admitted that he actually felt nervous during their confrontation, but knew he was in the right.

“I knew I was in the right, but given that we live in a society that still puts a premium to chivalry [and] non-confrontation, I didn’t know how she and the other passengers would react.”

After the woman left, Gan said that he was able to breathe a sigh of relief that he managed to stand by his convictions, despite being nervous during the confrontation.

Despite the mild tiff, Gan maintained that women who expect chivalrous gestures such as receiving seats in pubic transportation — granted that they aren’t pregnant, a senior citizen or PWD — were victims of society.

“These [women] are victims of a society that has ingrained both men and women with the idea that men are inherently more capable than women,” Gan told INQUIRER.net. “While the special treatment that ‘chivalry’ affords women might be good in the short-term, this neglects the fact that it strengthens the narrative that women are not and will never be in the same pedestal as men [and] thus are entitled to favors.”

Gan added, “They say chivalry is dead? I say rest in peace.” JB

Jabbawockeez dances in Makati, on top of jeepney to thank 2M subscribers