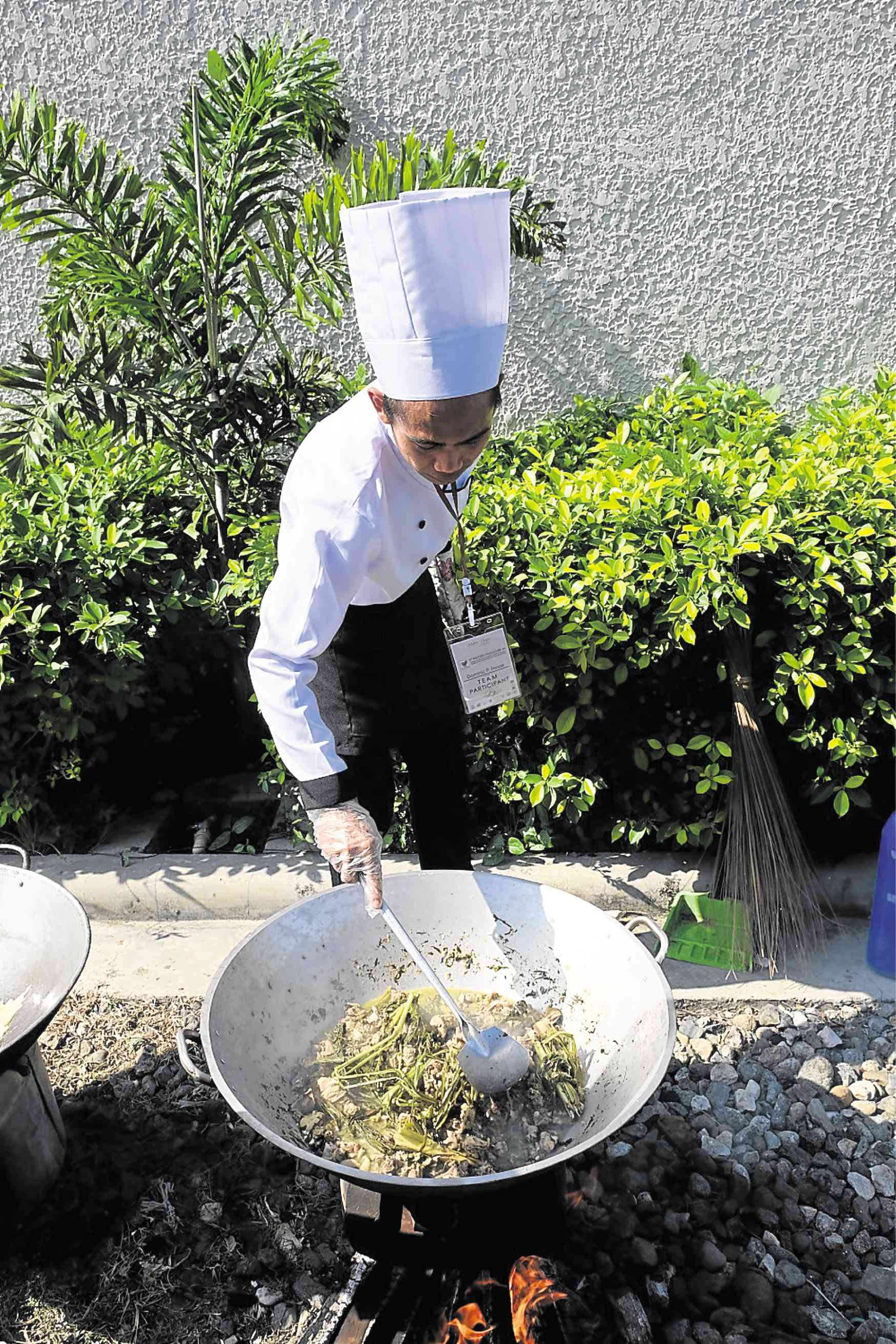 Cooking with firewood and charcoal is a must–MELO VILLAREAL

The competition is unique because the main dish is cooked using wood and charcoal. This method is closest to traditional cooking.

The appetizer and desserts could be made using electric or gas burners. The participants earned additional points if they used ingredients unique to Western Visayas.

Dessert was ice cream of mantecado with a batuan (souring fruit) caramel, sweet potato cream and a sesame crisp.

Somehow, the big packets didn’t work as well as the small ones we had in Cabatuan, where tinuom nga manok is a town specialty.

But the team’s appetizer, tahong sisig with crunchy bangus skin, was delicious and creatively presented in wedges that earned for the school first runner-up over-all.

Its dessert was different because it used seaweeds combined with cheese, cream, condensed milk and coconut meat. While it was beautifully done, somehow the flavors didn’t work. Would using processed seaweed like gulaman have worked better?

The recipes used local names and corresponding translations of ingredients and procedures. Katumbal nga pidada is bell pepper, pilit is glutinous rice, and labog is roselle.

A Tagalog can discern some procedures in Ilonggo because the words are almost similar, like gisahon (guisa, sauté) and batihon (batihin, beat). It was helpful to know that kihadon is “cut,” huruman is “soak” and ilunod is “put” or “place” and not “drown.”

At the event, he pointed to the batuan jam as a great ingredient in sauces, urged us to try the mango ketchup of the Guimaras monks and the alumpiran leaf as souring agent. We chewed a bit of the leaf and found it tasted like siniguelas (Spanish plum).

Jardeleza played a trick on the event’s special guest chef by requiring the use of any or all of the Ilonggo ingredients onstage. Chef Boy Logro of GMA 7’s “Idol sa Kusina” gamely obliged, cooking a fish dish that had a sauce of batuan jam.

It was delicious. It reminded me of Logro’s debut appearance at the cooking competition where his pata tim tasted so good.

The audience, including the occasional walk-in balikbayan who love traditional cooking listened to speakers who discussed the problems and rewards of “going organic,” as well as the significance of culinary tourism.

An abundance of Ilonggo cooking marked the Tabu-an. A roasted goat made it more festive.