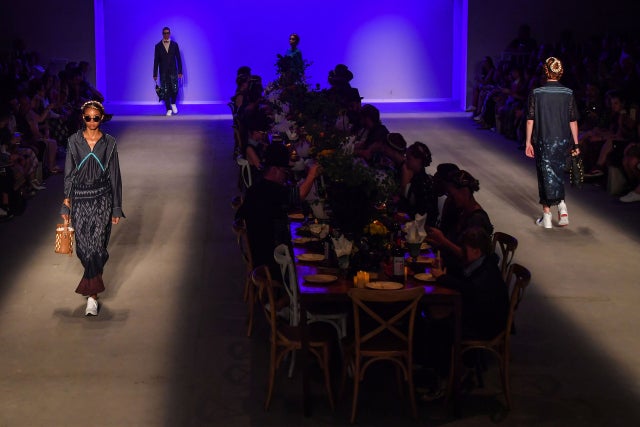 Lilly Sarti, the fashion brand run by sisters Lilly and Renata Sarti, opened the event on Sunday at a runway in downtown Sao Paulo.

The Sarti sisters’ “Heritage” collection offered a view of a winter encompassed by color, but with few patterns. Oversized garments with fringed edges dominated the chilly opening night, while stripes and animal print mingled with earth tones, blues, burgundy, black and white in looks that emphasized a cinched-in silhouette.

Familiar names to the Brazilian fashion festival such as Oskllen and Reinaldo Lourenco made an appearance Monday and Tuesday at a warehouse in the city’s western industrial part.

Just as in previous Sao Paulo Fashion Weeks, Brazilian designer Ronaldo Fraga stood out with a runway show that offered much more than just clothes and the latest trends. This time Fraga displayed a collection he said is a reflection on intolerance — strongly influenced by the Israel-Palestine conflict he observed during a 2017 trip to Tel Aviv.

“We’re turning out to be an extremely intolerant society. Intolerant of differences and of minorities. In this show, I wanted to talk about that,” Fraga told reporters.

At the end of the show, Fraga’s runway moved to center around a large banquet table with models and invited spectators sitting around it. He once again presented a diverse line-up of models, reflecting the reality of the city of Sao Paulo.

Torino launched Monday with an urban runway full of blue, green, black and white. The star of the show was Brazilian actress Deborah Secco, who showed off her new short haircut.

Cacete Company, which is set to display its designs on Friday, promises a collection inspired by the “subversive pornographic culture” of the 1990s.

Also on Friday, Piet will present “Montana”, a collection that takes its cues from sporty hiking and outdoors-wear looks.

And Bobstore plans to show off its Georgia O’Keefe-inspired collection Wednesday.

Sao Paulo Fashion Week, which will have offered a total of 31 shows by its end, closes Friday. CC