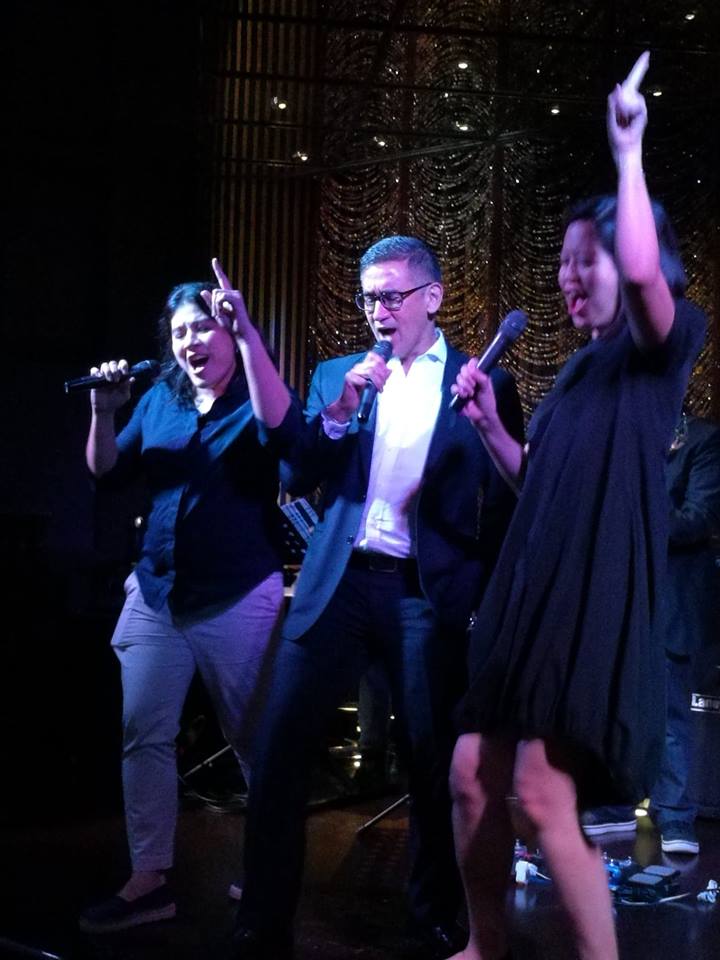 ‘First I was afraid, I was petrified …’

Eight years since it opened, the bar and lounge Salon de Ning in Peninsula Manila has continuously booked various acts—jazz, rock, pop, dance, acoustic and whoever else was interesting at a particular time.

I remember a few mind-blowing nights there, especially in February 2011, an edition of the PIJazzfest (Philippine International Jazz Festival) that featured Wally Gonzalez playing blues with Norman Ferrer and other top musicians.

On Oct. 23, Salon de Ning sent an invite to a different kind of gig—“Rockaoke at The Pen”—in which anyone in the audience can go onstage to sing with a live house band.

Bea Tantoco played host, asking guests to freely choose the songs they want from a list and sing it themselves, with the band Circulo as backup. The lyrics would crawl on a screen monitor onstage.

There were screens as well for the rest in the audience to sing along as they wish.

To warm things up, Tantoco sang Maroon 5’s “Sunday Morning” and Alicia Keys’ “If I Ain’t Got You.”

The music put our group in a good mood. Among the spirits on the menu, I chose Hendrick’s Gin with tonic—it was invigorating. Switching to red wine, a Sta. Rita 120 Cabernet Sauvignon from Chile, gave a laid-back effect, relaxing enough to appreciate the next Rockaoke singers.

Choon rendered Billy Joel’s “Just the Way You Are” like a yuppie having fun at a party.

But things got uproarious when a trio composed of Old Swiss Inn’s Katrina Alcuaz, The Pen’s PR director Mariano Garchitorena and Town & Country Philippines’ Yvette Fernandez proceeded with a disco anthem, “I Will Survive,” with spontaneous choreography. The first lines captured a vibe—when nervousness and anxiety would lead to something better: “First I was afraid, I was petrified…”

As it turned out, “Rockaoke at The Pen” will go on as a regular event once a month, Garchitorena said.

There are currently 485 songs on the play list that includes OPM and international pop, rock and other classic hits.

Reid will lead the festivities on Nov. 3, 6 p.m. at Robinsons Place Manila, which has put up a 36-feet Christmas tree.

The public is invited to join a gift-giving activity with children patients at the Philippine General Hospital Cancer Ward, who will be treated to a day at the mall.

Pascual’s turn to preside over the holiday rites on Nov. 11 at 6 p.m. in Robinsons Magnolia. He will sing a number of tunes aside from lighting up the 36-feet Christmas tree.

Children supported by the Immaculate Conception Cathedral will be treated to a trip to the mall on the same day, with Pascual leading a gift-giving activity.