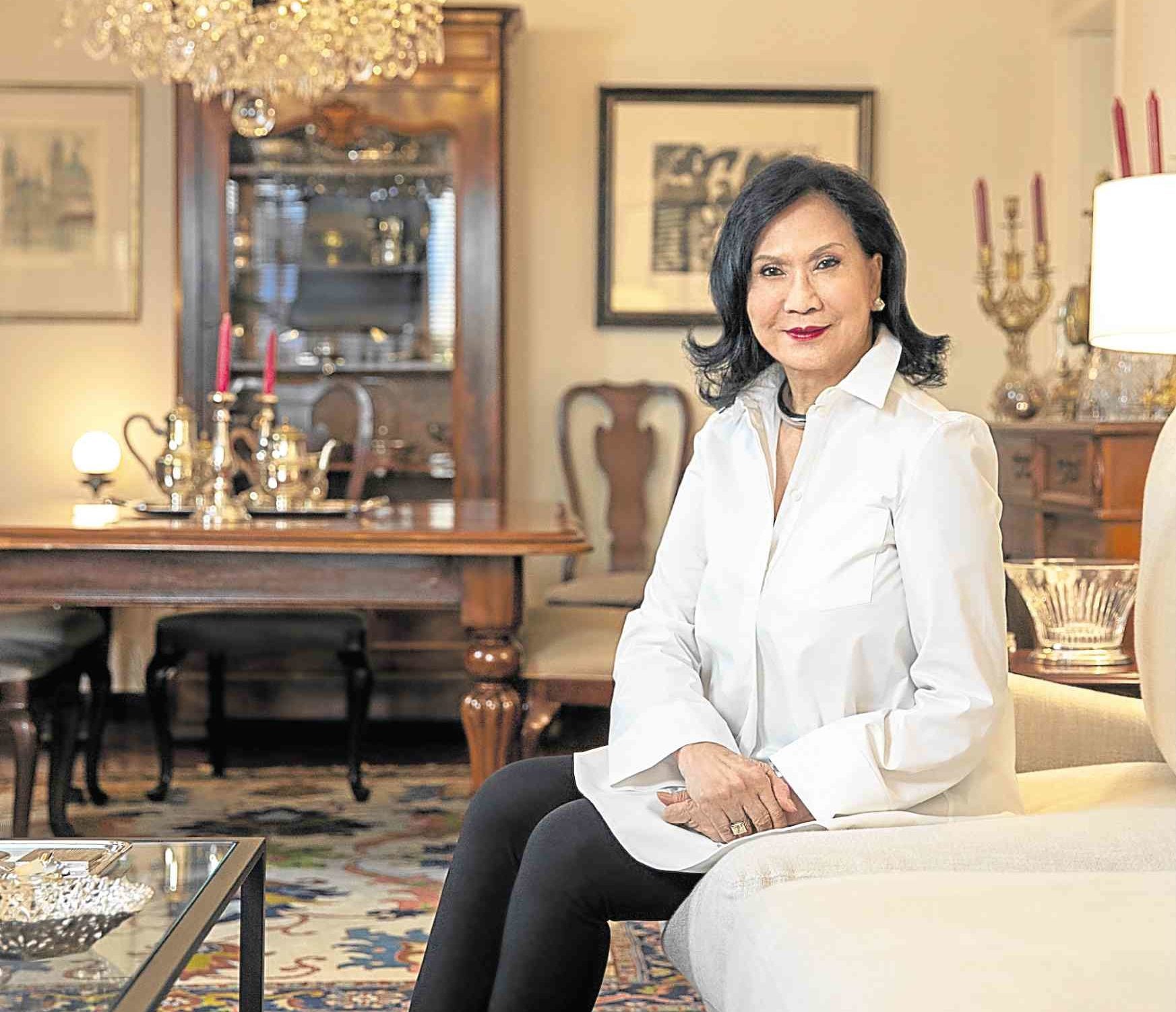 Babette Aquino-Benoit in her living/dining area, with her select mementos

Babette Aquino-Benoit still tears up when she looks back on that night four years ago in Paris, where she lived with her husband, Paul Benoit.

She was just with him in the hospital, where he had undergone heart surgery. She went home to the apartment she shared with him, as extended visits were never allowed in the hospital. Then in the middle of the night, she got the call.

It was the hospital asking her to rush over. She knew at that moment that Paul was gone.

Dazed yet with an adrenaline rush, she dashed through the empty streets of Paris in half darkness, her longtime friend, Mario Katigbak, at her side. Katigbak was in Paris on official business for Hermès, which he runs in the Philippines. There were no cabs plying the streets of Paris that night because of some city crisis, and Babette’s apartment at 17 rue  du Cirque, a stone’s throw away from the presidential residence, was always right smack in the off-limits security zone.

Babette literally ran to the hospital, but it was too late. Paul had succumbed to sepsis. She now had to say goodbye to the man she had been married to for more than 20 years.

Typically gregarious and always reaching out to the Filipinos, rich and poor, in Paris, Babette—who designed a popular ready-to-wear label in Manila in the ’80s, and was among the scene’s stylesetters and well-liked socialites—was, seemingly, alone in that apartment and in the most romantic of cities, day and night.

“But, you know, looking back, I felt I wasn’t really alone,” she tells friends like us, who remain incredulous imagining how she could come home every night and wake up every morning, alone, in that huge apartment—very elegant and Old World, so well appointed with the couple’s tasteful furniture and furnishings, from antique silver to period sofas, but still too big for one person, and dark at night.

“I  just prayed,” Babette replies. “I felt I was never truly alone because I would begin and end the day praying.”

In the decades she lived in Paris, Babette’s place in rue du Cirque served as halfway home for countless Filipino friends visiting France. Her kitchen was always ready to serve adobo, lumpia and other local favorites that the Filipino tummy couldn’t live without for too long.

Celebrities in government  such as Loren Legarda; in media such as Korina Sanchez, Millet Mananquil; in fashion such as Virgie Ramos,  Ben Chan,   Jappy Gonzales, Katigbak;  in medicine such as Dr. Vicki Belo and Dr. Hayden Kho, Dr. Rex Gloria —name them, Babette and Paul’s place had been their must stopover in Paris.

In a choice district, the apartment is vintage Paris: You take the old elevator, land on the  doorstep, then the door opens  onto a long hall decked with a gilded mirror and commode, and proceed to the high-ceiling living room, its windows curtained off from the street below, the soft-cushion sofa backdropped by an antique tapestry. Before the sofa, beyond  the coffee table laden with silver collectibles, is the fireplace.

It was in this cozy center of the living room that many a juicy tale about past and present Metro Manila characters had been shared, debunked, buttressed—otherwise hush-hush topics thrown around in the noisy chatter.

Loud noise of the day, stifling eerie quiet of the night. That was Babette’s 17 rue du Cirque, or so we thought. 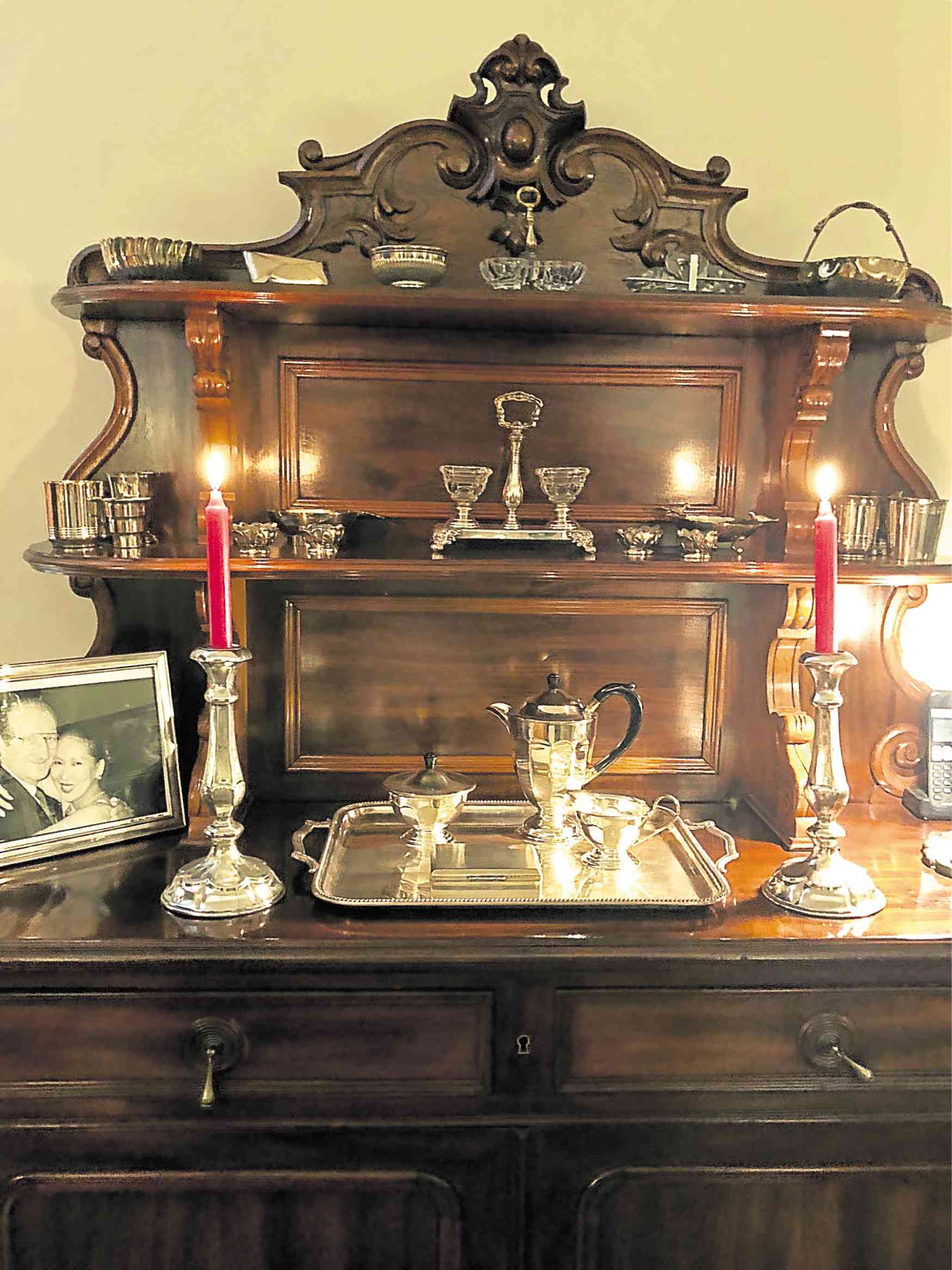 “In the days after Paul’s death came my revelation,” Babette corrects her friends’ bias against living alone in a foreign city. “Every night, God would reveal to me that I was not alone, and how He truly loved me. That was the revelation that kept me  living in Paris and loving it. And I knew Paul was at peace.”

That  revelation of God’s love emboldened Babette to stay on in Paris for four more years after Paul’s death, without giving in to fear or aloneness.

While the way Babette talks about God may seem hokey to others, to her it’s just the way she’s been most of her adult life. A  Christian born into God’s Word for many decades now, Babette begins and ends the day reading the Bible, gathers friends for a Bible study, and attends weekly religious services.

In widowhood, she loves to read to her friends Isaiah 54:5, 17: “For your Maker is your husband, the Lord of hosts is His name . . .  He is called the God of the whole earth. No weapon formed against you shall prosper. And every tongue which rises against you in judgment You shall condemn . . . ”

In time, however, her friends like Rustan’s chair Nedy Tantoco—and especially Babette’s children—prevailed upon her to come home to Manila for good. On a visit once to Manila, her blood pressure fluctuated, and her children saw that as a reason to convince her to resettle here. They felt concern that should an emergency arise, she would be alone in Paris.

Babette has four children from her first marriage: sons Jog, Benny and Roby, and daughter Maica (who started the first rental gowns business in Manila after her studies in Paris), and has seven grandchildren.

She procrastinated about her return to the Philippines; she felt as if leaving Paris would really be saying goodbye to Paul and all that they shared. But reading and rereading Isaiah 54:5, 17 gave her the absolute answer.

She flew back home, with a container-full of some of her stuff in the apartment. She traveled with a baggage of memories.

Shortly after her return, she decided to put all  her stuff on the block—like letting go of everything that reminded her of the past.

But days before the actual sale, a talk with leading design artist Budji Layug made her change her mind.

“I wanted my condominium here to be very modern and minimalist, like Budji’s style, only a low sofa and nothing else,” Babette recalls.

“But Budji told me, ‘It’s not you.’ So Budji and I came up with this,” she adds, while showing us around her unit that overlooks a busy cityscape.

Babette is back in Metro Manila, whose character and looks are an antithesis to Paris. Yet in this megacity setting, Babette and Budji created a place which her friends now call “a little Paris” or “rue du Cirque in Manila.”

Budji, who is related to Babette—the two  lived together in Europe and then in Manila years ago—followed   an open floor plan, a simple, free-flowing space given to a dining table Babette kept from Paris, a simple sofa and chairs, and a sitting area by the window.

However, Budji was able to convince Babette to keep some of her special stuff from Paris.

Apart from the dining table, there’s a commode, a secretaire, the dining room cabinet, paintings of unnamed Parisian artists that Paul acquired, a few chairs, a portrait of Babette done by Budji in the ’70s which occupied a prime spot at 17 rue du Cirque, a few silver collectibles, and family portraits.

With these special keepsakes from her Parisian life, Budji and Babette created a warm cocoon for the widow— Old World Parisian elegance in a very modern setting.

Babette’s reentry into Manila lifestyle consists of Bible fellowship with a group of friends she calls Group Isaiah 54 ladies (Karen Davila, Garlic Garcia, Gina Rodriguez, Rhoda Campos, among others), and bonding with friends.

In a Lifestyle interview with Marge Enriquez, she spoke of how she might revive an RTW line, but this time for a niche market: the women who share her style and taste.

The widow has moved on, but like in her new home, she has selected a few special memories to keep alongside Paul.

When the long departed loved one is already cocooned in your heart, safe from  the daily noise of the living, then you have really  moved on.