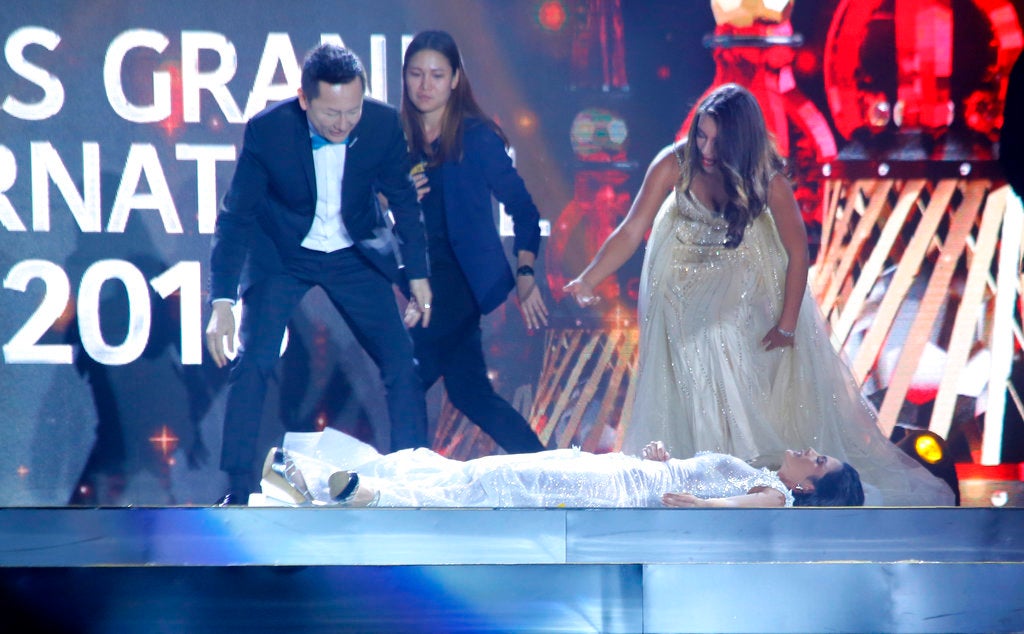 In this Oct. 25, 2018 photo, Miss Paraguay Clara Sosa lies on stage after she fainted following the announcement that she won as Miss Grand International 2018 during the pageant’s coronation night held in Yangon, Myanmar. (AP Photo)

BANGKOK (AP) — A Paraguayan beauty pageant winner swooned on stage after admitting the anticipation just before the announcement was unbearable.

Miss Grand International 2018 Clara Sosa fell as soon as she was announced this year’s winner. At the time, she was holding hands with the first runner-up, Meenakshi Chaudhary of India, who tried to help but failed to catch Sosa as she collapsed and hit the floor.

Sosa soon recovered and waved, cried and smiled to cameras before she was surrounded by fellow contestants who congratulated her.

In an interview before the winner was announced, Sosa said breathlessly that she might need a doctor because she felt like she would have a heart attack.

Earlier in the night, contestants were asked which country they would visit to campaign for an end to wars and violence. Sosa said if she won she would “strategically” choose to visit President Donald Trump “because the United States is an example for other countries. So my first message to him would be: please be an example of peace, love and tolerance.” NVG