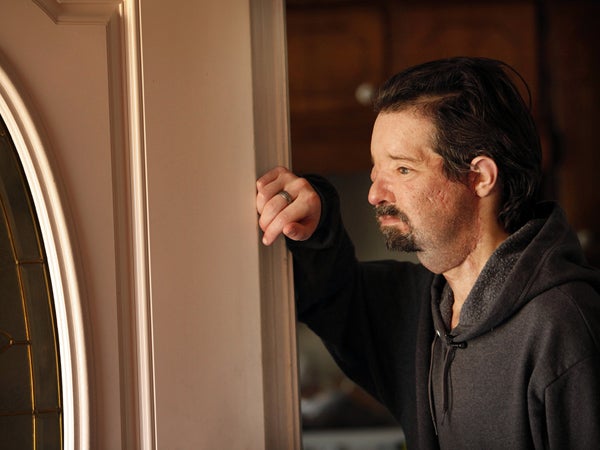 In this January 11, 2011 photo, Dallas Wiens is seen in his home in Fort Worth, Texas. Ten months after becoming the first person to get a full face transplant in the United States, Dallas Wiens marvels at recovering the ability of expression. THE DALLAS MORNING NEWS, TOM FOX/AP PHOTO

FORT WORTH, Texas – Ten months after becoming the first person to get a full face transplant in the United States, a Texas man marvels at recovering the ability of expression.

The progress of 25-year-old Dallas Wiens and the handful of other patients that have undergone the procedure are helping to make the case that it should be more widely available.

“The ability to smile and to show emotion on my face, even unintentionally, is such a natural thing,” Wiens told the Dallas Morning News (http://dallasne.ws/xU15Ij ). “Having a new face has changed me dramatically.”

Wiens’ face was burned off in 2008 when his head touched a high-voltage power line while he was standing in an elevated cherry picker. He was also left blind and has not recovered his sight.

He underwent more than two dozen surgeries, but they left him with a featureless face. The transplant changed that.

“I don’t look much different than anybody else,” he said.

Wiens case, and those of two others, were the subject of a study published last month in The New England Journal of Medicine. The procedure can correct “severe deformities in a single operation” rather than years of reconstructive surgery, the study said.

The Department of Defense funded the transplants though a $3.4 million grant with the hope of offering the procedures to wounded soldiers.

Wiens was the only patient of the first three surgeries done in the U.S. who did not suffer an acute rejection of the transplant within the first six months, though all suffered infections.

The first full face transplant was performed in France in 2005. Since then, 18 patients have shown “promising results,” the study said.

The study also weighed in on early concerns that the donor’s facial identity would be transferred to the recipient.

“It is our subjective opinion, as well as that of two of the donor families, that the patients do not look like their donors,” the study concluded. (The third donor family chose to remain anonymous and did not participate in the study.)

Wiens, through physical therapy, can once again do things such as control his lips to drink from a glass. And he regained his sense of smell.

He has had to return to Brigham and Women’s Hospital in Boston a couple times for adjustments to make the face fit more snugly.

“To undergo a face transplant and regain normalcy allows me to do whatever I want to do,” he said. “It’s a journey that I’ve just started.”