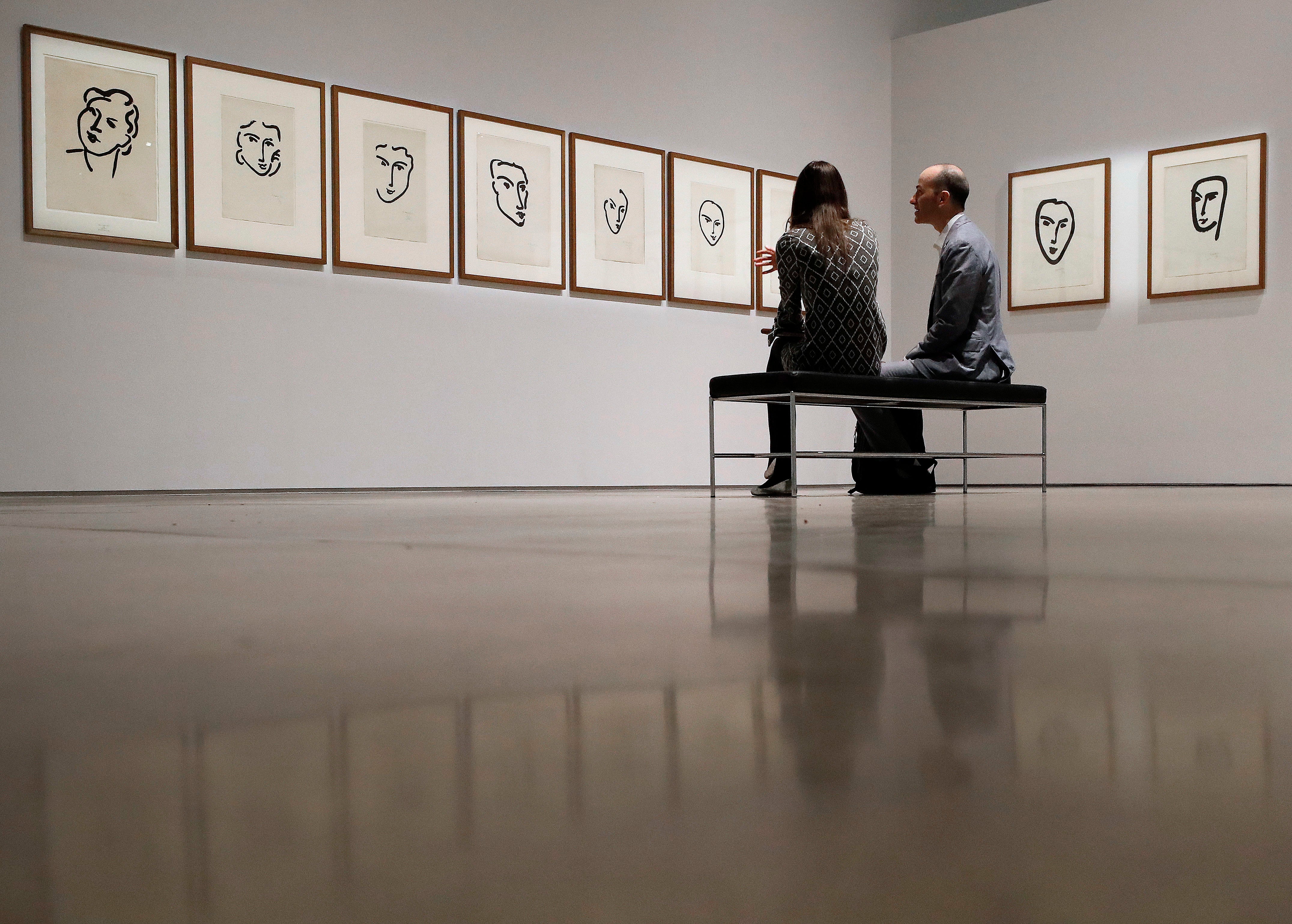 Curator Sean Mooney views the final installation of a selection of Matisse portraits at the Heard Museum with staff member Willow Senjamin, Thursday, Oct. 25, 2018, in Phoenix. Nearly 64 years after his death, French artist Henri Matisse has become one of the few non-Native Americans to have an exhibition at the Heard Museum dedicated to Native culture. The little known intersection of one of the 20th century's greatest artists and the Inuit people is at the heart of a show opening Monday at the Heard Museum. "Yua: Henri Matisse and the Inner Arctic Spirit" will feature Matisse portraits, which have not been displayed in the U.S., and masks made by Alaskan Natives who influenced Matisse. Image: AP/Matt York

PHOENIX (AP) — Nearly 64 years after his death, Henri Matisse has become one of the few non-Native Americans to have an exhibition at a Phoenix museum dedicated to Native American culture.

The little-known intersection of one of the 20th century’s greatest artists and Inuit people in the Arctic region is at the heart of a show opening Monday at the Heard Museum.

“It’s a story I didn’t know much about until 1998 when I became friendly with a member of the Matisse family,” said museum director David Roche. “It truly took several years to absorb it all. It spans centuries, cultures and continents.”

“Yua: Henri Matisse and the Inner Arctic Spirit” will feature Matisse’s portraits of the Inuit people, which have never been displayed in the U.S. But the French artist, who died in 1954, will share the spotlight with Alaska Natives who influenced him. Yup’ik masks made by Alaskan Natives, some of which were collected by Matisse’s son-in-law during World War II, will be just as much a part of the exhibit.

The Heard is the only place showcasing the unconventional pairing.

“We have a lot of historic firsts in this particular work,” said curator Sean Mooney. “We’re kind of doing an exhibition within an exhibition by having these two parallel displays of historic Yup’ik masks and this very specific historic body of work by Matisse.”

Matisse is more widely lauded as a pioneer in Fauvism — a style characterized by vivid colors and less controlled brush strokes. But he became interested in indigenous cultures in the 1940s. Son-in-law Georges Duthuit had acquired an array of the masks and other materials while living in New York City as World War II broke out, Mooney said. In 1946, Duthuit returned to France with his collection.

He and Matisse’s daughter, Marguerite, suggested Matisse do three illustrations for a proposed book on the Arctic people. He made 50.

Matisse, according to Mooney, looked at masks made of wood, feathers and other materials, and two books with photographs of Inuit men and women. The museum will have several black-and-white portraits, including charcoal drawings and lithographs. Taken with the culture, Matisse even began referring to any portrait he did as a mask.

“With a stroke, he created what he called masks,” said co-curator Chuna McIntyre, who is Central Yup’ik. “He got the essence. It’s amazing — pared down, quiet interior, personal creations.”

Villagers would traditionally tell stories with the masks through song or dance, paying respect to “yua”. According to the Yup’ik culture, “yua” means spirit but can also refer to the spirit inside living creatures, inanimate objects and their connection to each other.

“Everything that exists in this universe has the potential of yua because it exists here. That’s an old concept in Yup’ik,” McIntyre said. “There’s a whole gravity to it. Yua — it’s in a being, it’s in a person.”

Yup’ik Eskimos comprise one of 11 distinct cultures among Alaska Natives in the southwest part of the state, according to the Alaska Native Heritage Center. Marge Nakak, a cultural host at the center, said masks are traditionally worn at annual festivals between Native villages during a gathering known as a potlatch.

Historically, the masks were discarded after a ceremony. Sometimes they were burned or left on the tundra, Nakak said.

Some American Indian cultures would not consider showing ceremonial items such as masks because they consider them to be living beings not meant for display. Yup’ik people, on the other hand, tend to be more transparent, McIntyre said. He said the masks always have been intended to be shared in public performance.

“We Yup’iks feel in terms of museum collections, museums are caretakers of our civilizations’ treasures. That’s important to say,” McIntyre said.

In the early 20th century, the masks and Native cultures in general gained a following among traders and collectors who were interested in preservation, Mooney said. Many masks ended up in museums. George Gustav Heye, whose vast collection of Native American objects shaped the Smithsonian’s National Museum of the American Indian, was one of the leaders in bringing artifacts to New York City, where they came into the orbit of the French intelligentsia.

Masks typically are created in pairs or other groupings to represent symbolic relationships such as male and female, or night and day. So, the show will mean reuniting masks that have been separated for, in some cases, a century, museum director Roche said. After the exhibition closes Feb. 3, some masks will go on display in Alaska.

Some people may question giving space at a museum for American Indian artists to a white, European one. But Roche said the exhibition has immense support because of its duality.

“The Heard has been a leader in presenting American Indian art with great sensitivity,” Roche said. “I think it’s meaningful that we are working in this way. I think stories, to be told well, often have to be told from multiple perspectives.”

Matisse will likely draw people who normally wouldn’t go to the Heard and expose them to Alaskan Native cultures.

“That’s wonderful because the only thing that is taught in the Lower 48 states is that Eskimos live in igloos. Period,” said Nakak, of the Alaska Native Heritage Center. “That’s it.” CC