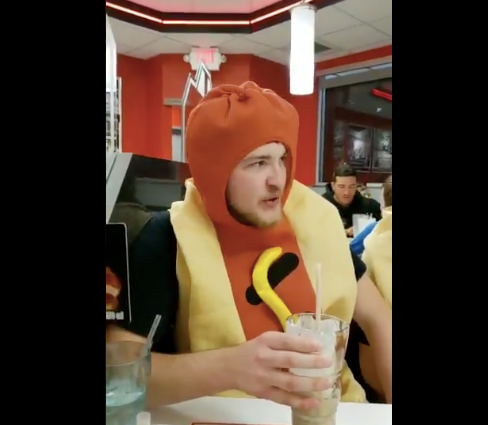 When a friend of Ohio teenager Jon Jarrett dressed as a hot dog for Halloween, he took the role very seriously.

Footage shot at the American restaurant and shared via Twitter on Friday, Oct. 26 by Jarrett shows a young man eating a hot dog and looking directly at Jarrett’s friend.

Jarrett’s buddy, who was sporting a hot dog suit, then stared the fellow diner down before saying, “If I could order a human, I’d eat him too.”

Another layer to the burgeoning rivalry between Jarrett’s friend and the unrepentant hot dog-eater arrived on Saturday, Oct. 27, when an account under the name Martin Whitley (@MartinWhitley10) posted an image of a half-eaten hot dog with Jarrett and his pals in the background.

And it was DELICIOUS pic.twitter.com/Yn9qEF5cWG

Appearing to be from the man who was chowing down the hot dog in Jarrett’s video, Whitley wrote that the hot dog, “was DELICIOUS.” KM