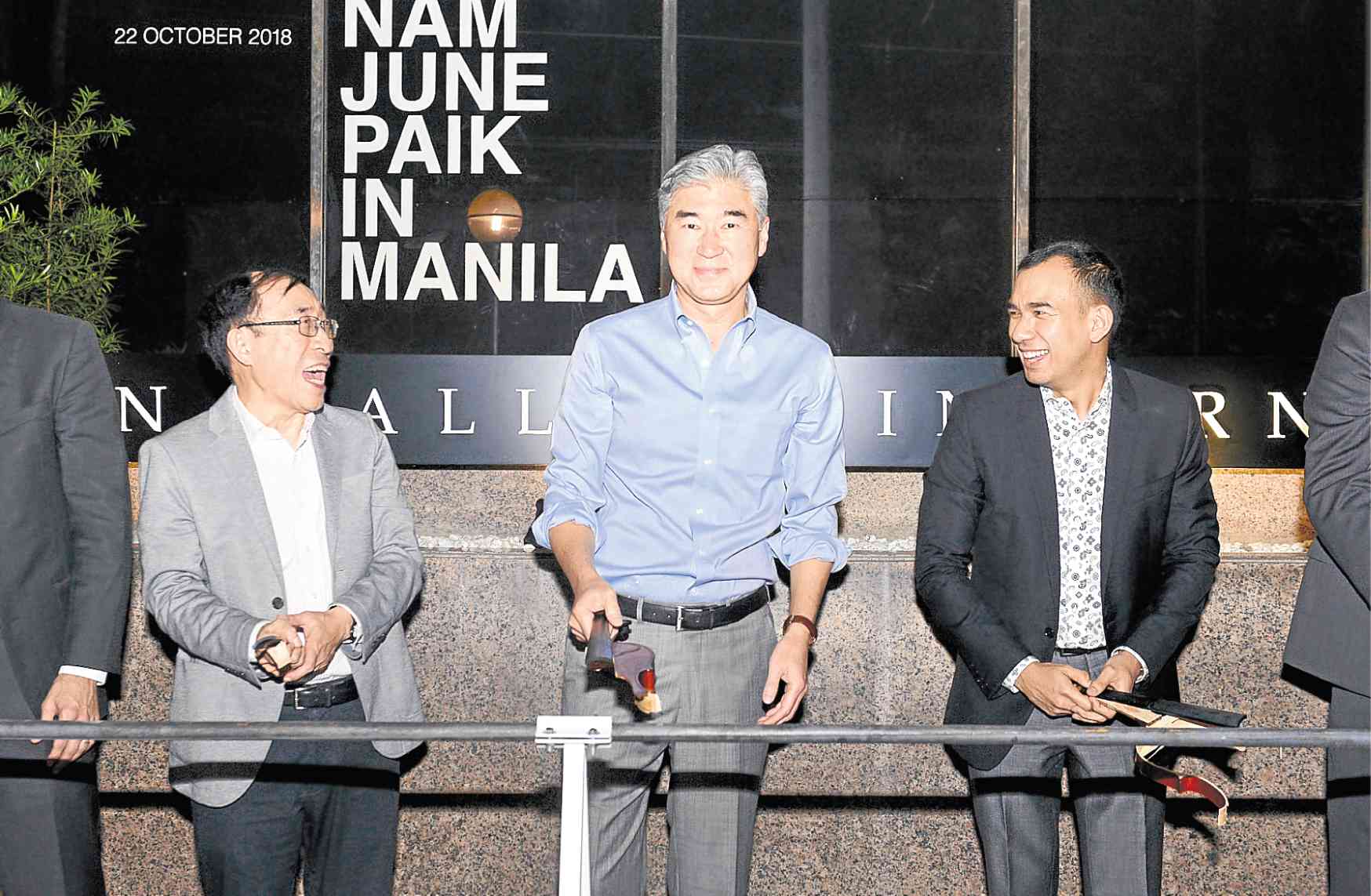 Amid a technology-driven world, video art is something we encounter every day without even noticing it.

In the world of video art, one name stands out: Nam June Paik. Regarded as the “father of video art,” the Korean artist flourished in mixing different influences, just as video recording technology was being introduced to the world.

While my parents were still trying to figure out how to make a home video, Paik was already using it to fuse traditional art media.

He is credited with coining the term “electronic superhighway” in 1974, in relation to telecommunications.

This is what I saw and tried to further discover at the recent opening of “Nam June Paik in Manila” at León Gallery’s new home on the ground floor of Corinthian Plaza in Makati.

The exhibit, which features 24 pieces from Paik, created from 1983 to 2005, is a partnership between León Gallery and the international Gagosian Gallery.

Among his works, you will see the artist’s journey. Fleeing from home due to the Korean War, he finished college at the University of Tokyo.

Trained as a classical pianist, his passion for music led him to West Germany. In the ’60s, he participated in the Neo-Dada movement, a group of experimental artists playing with various new media including television and video recording.

Paik didn’t just play around with the idea of distorting images on screen. He used actual television sets to create sculptures as well, making the images converse with their physical manifestation.

Nick Simunovic, managing director of the Gagosian Gallery Hong Kong, gave his insights on how Paik’s works prefigured the advent of video technology: “Nam June understood technological obsolescence better than almost anyone and, by extension, he was equally adept at harnessing technological advances to serve his art.”

He “streamed” live to air television signals and also commandeered a series of satellite-linked television studios in New York, West Germany, South Korea and Paris for a global broadcast to an estimated 25 million people.

Later, he used lasers to build towering installations, like at the Guggenheim Museum.

Simunovic also pointed out how Paik expanded his work through different influences, from sources he looked up to during his college days, to contemporaries: “Paik broke many artistic conventions, and his coconspirators in this endeavor included other Fluxus artists like John Cage, Yoko Ono, George Maciunas and Joseph Beuys. Given that he was a gifted pianist, I would also suggest that the revolutionary spirit of musical iconoclasts like Schoenberg and Stockhausen should also be recognized as influential to his work.”

In today’s world, in which form and function collide, and influence and sight seem inseparable, Nam June Paik’s body of work resonates stronger than ever.

He symbolizes the values of experimentation, innovation and how art always gives us a place to play with our curiosity.

Seeing how he went beyond convention, as technology was just being utilized around him, proves how human imagination is always light years ahead.