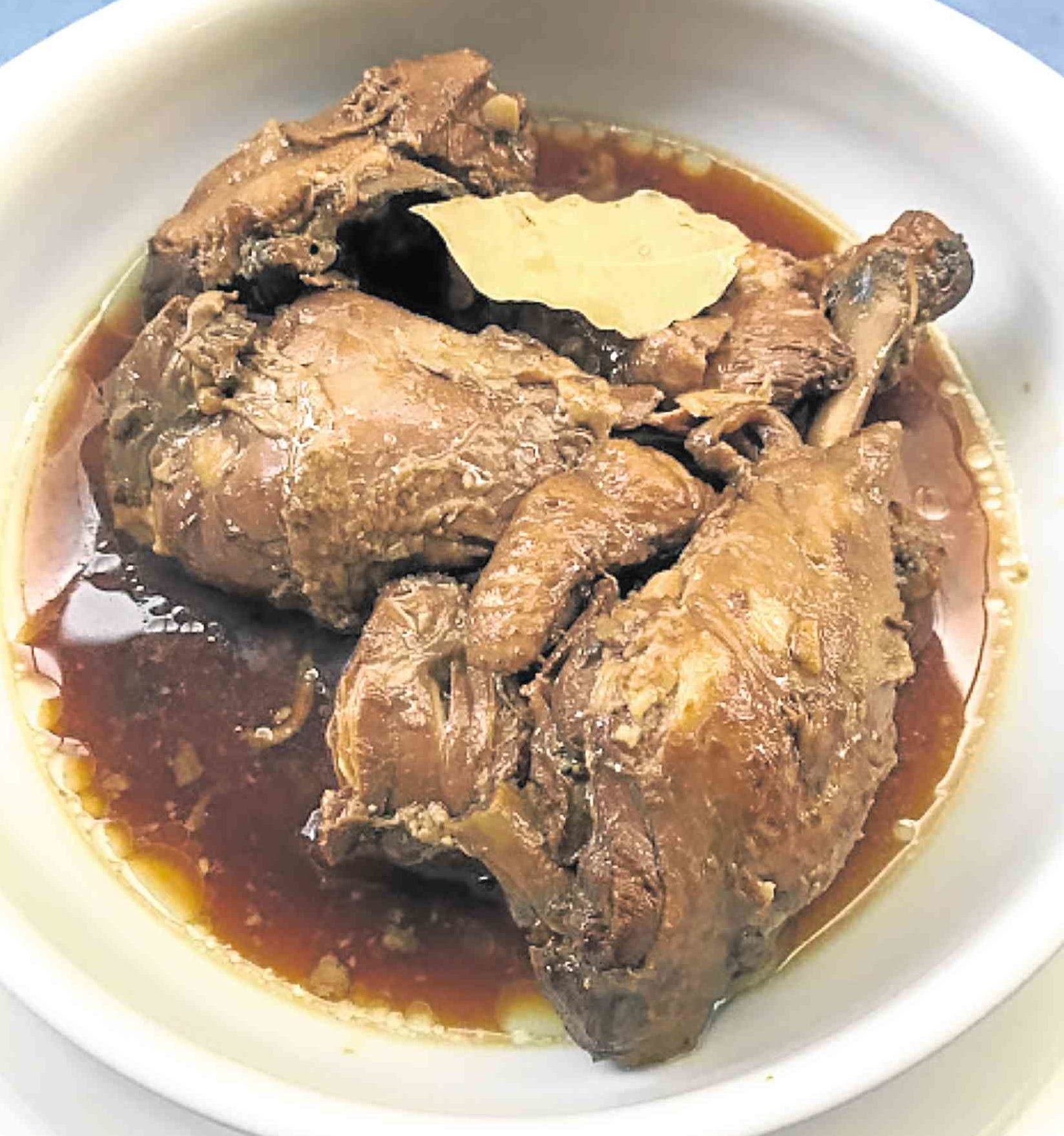 It’s the easiest adobo I’ve ever cooked, and I found the recipe in a compilation of the best food writing for 2001, edited by Holly Hughes.

Originally published in The Seattle Times, the recipe was contributed by chef and food writer Greg Atkinson, who got the recipe from Jeff Taton, then a member of his crew in the Seattle restaurant Canlis.

In his article, Atkinson wrote about “crew chow,” or the food served  the crew before the restaurant opens to diners (or after it has closed).

According to Atkinson, the members of his crew usually cooked the traditional comfort foods they grew up with in their home country. One of his favorites, he said, was this chicken adobo often prepared for the staff by Taton.

Many adobo recipes require the pork or chicken to be browned in oil before or after being simmered in vinegar. This recipe completely does away with that, thereby avoiding the spattering of oil that could make cooking adobo a risk for skin  burns.

And still when I cooked the chicken, it turned brown, not pale or whitish (maputla), as some people scoff about adobo cooked without browning.

The dish was tasty too—maybe a bit too sour for my taste but with the full adobo flavor which we Filipinos relish.

With two cups vinegar, two cups soy sauce and two cups water (proportions that are easy to remember), the sauce was more than enough for six or more people to spoon over steaming hot rice.

However, instead of using whole chicken as indicated in the original recipe, I used my favorite chicken parts.  This makes apportioning the dish among six or more diners more equitable (each one can have his favorite part).

I also tried cooking this using pork instead of chicken and the recipe worked just as well. The ample liquid in the pot was enough to cook as much as two kilos of pork —making this an ideal dish to bring to a large family picnic or potluck dinner.

I think this will be my favorite adobo recipe from now on.

(Adapted from the recipe of chef Jeff Taton)

Add the garlic, bay leaves and black pepper. Bring to a boil, without stirring. When the mixture comes to a boil, lower the heat to a simmer (at this point you can already stir the mixture). Let simmer for 35 to 45 minutes, until the chicken is fully cooked and tender.

You can adjust the amount of vinegar, soy sauce and water if you find the sauce too sour.

Do not stir the liquid until it has come to a boil. Stirring the liquid before then will give the dish a raw flavor.

The original recipe called for five cloves garlic but you can use a whole head of garlic if desired.