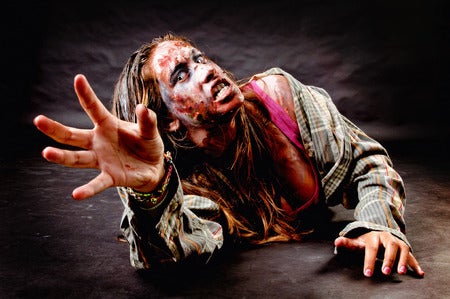 Woman’s fake zombie teeth get stuck in her mouth

All she wanted to do was scare people on Halloween, but one woman in Mobile County, Alabama got the early scare as her fake zombie teeth accidentally got stuck in her mouth.

Anna Tew thought her zombie costume would not be complete without zombie chompers, which cost her $3 (around P160), as reported by News 5 WKRG on Saturday, Oct. 27.

Tew applied some adhesive which came with the teeth before putting it on. But when she tried to pull it out ” because they were just tight,” she found out that the adhesive was not temporary.

“It went on and on and I was trying to get them out,” Tew was quoted in the report. She added that it took her until 2 a.m. the next day to try to remove the teeth, but the teeth still “wouldn’t bulge.”

“I even took a pair of wire clippers and cut the tips off of those,” she said of her attempt to pull it out. She then found a dentist named Dr. John Murphy to help her with her problem.

“He talked about drilling,” Tew said in the report. “They had a saw, talked about taking [them] off in sections, and they couldn’t numb it because they were scared they would actually pull my teeth out.”

Tew then “squealed like a baby” when Murphy finally pulled the fake teeth out. Katrina Hallare/JB