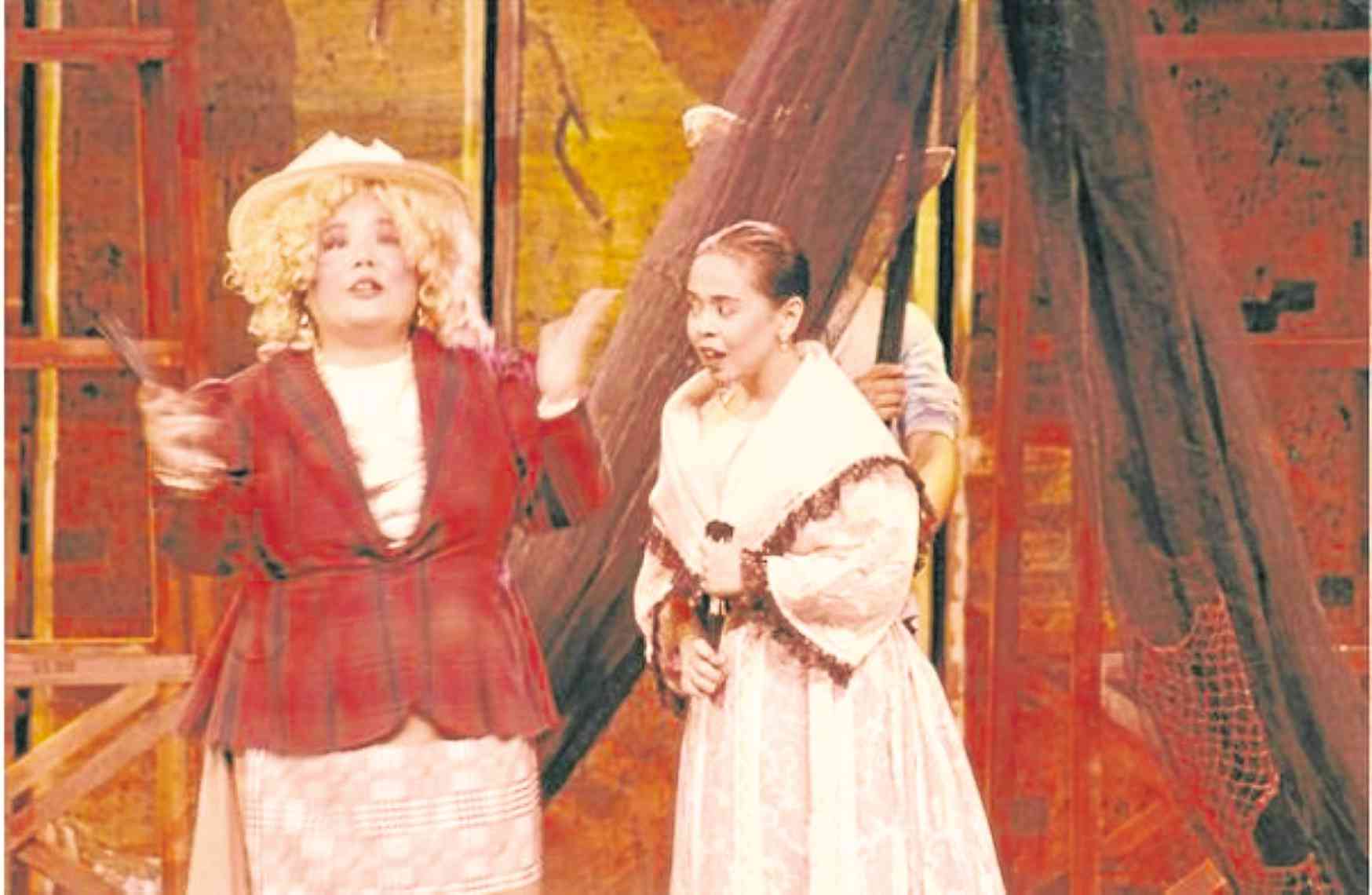 I’m looking at photographs from the 1993 production of Floy Quintos’ “Fili,” directed by Tony Mabesa and staged by Dulaang Unibersidad ng Pilipinas, the play that represented the Philippines in the Asean Theater Festival that year in Bangkok.

The memories are bittersweet; it was a remarkable experience, but that was 25 years ago, and since then, we’ve lost a number of  wonderful actors in the cast: Ray Ventura, Ogie Juliano, Mario O’Hara.

Last Oct. 23, we lost the queen mother herself, the bundle of joy and energy that was Doña Victorina, the inimitable Len Ag. Santos-Siasoco.

She was 63, and is survived by her husband Shax, director of entertainment venue operations at Solaire, and her kids Leon, 23, and Lila, 14.

I first met Len a couple of years before Bangkok, during the first staging of that play, and we got along grandly, despite the fact that I was not a full-time actor, and Len knew everybody and everybody knew Len. Maybe it was our excess pulchritude and voracious appetites that had us finding allies in each other.

Len had the kind of theater resumé that professionals can only dream of, although it never made her arrogant. She studied journalism at the Lyceum of the Philippines, but was soon acting, writing, directing and giving workshops.

It was during one such workshop that she met Shax, many years younger and almost half her weight at one time.

Name the theater company, and Len has worked with it—from the Bulwagang Gantimpala Theater Foundation and Teatro Pilipino to Dulaang UP and Tanghalang Pilipino, with directors like Rolando Tinio, Tony Espejo, Tony Mabesa, Anton Juan, Nonon Padilla and many others singing her praises.

It wasn’t just because she had tremendous stage presence; she was also the ultimate professional, coming on time for rehearsals, ready to rock ‘n’ roll. There were also movies  and TV shows.

Indeed, she was Doña Victorina personified, in all her comical glory. It was her favorite role, in Gantimpala’s staging of “Kanser,” a flamboyant persona that sometimes concealed the fact that Len was an artist of great insight and sensitivity.

She was an empath who felt strongly for anybody’s pain or happiness. She laughed heartily at other people’s jokes, cried when they were heartbroken—and could be so unbelievably naughty that we couldn’t keep a straight face, even while on stage.

Our biggest goal then was to make the formidable Mario O’Hara forget his lines. In a big scene of “Fili” in Manila, we had to climb an arch like creeping vines, and face backstage toward Mario, who played Simoun, addressing the audience from under that arch.

Len and I would write funny lines—“Mario is my guy,” “Lab you Mario”—on our thighs with Pentel Pen, and flash him before his entrance.

It was a good thing laughter was part of his dialogue—Mario complained about being constantly out of breath during the scene, holding back his chuckles.

Post-rehearsal and after-show dinners and drinking became standard procedure. Always in tow was Shax, already an accomplished lighting and technical director, as chill and unruffled as Len was hysterical and ebullient.

After years of living together, the pair got married on Dec. 8, 1992, and Len drafted three equally voluptuous bridesmaids for her entourage, including myself.

The apartment complex on San Luis Street, Pasay, that they shared with other artists at the time, including director Frannie Zamora and actors Nonie and Shamaine Centenera Buencamino, was party central, as far as theater people were concerned.

There was the time somebody made brownies with a twist, shall we say, and being hungry, I wolfed down two or three very fast.

Soon Len was feeding me ice amid everyone’s laughter, and walking me up and down the street to get my senses back. In the unthinkable days before traffic, Shax had to drive me home to Marikina in my car, with a back-up vehicle behind us.

Flying to Bangkok with the cast and crew of “Fili” was a riot, even as it was a genuinely proud moment for Filipino theater artists. Len and I were roommates who ate, shopped and lulled each other to sleep with our snoring.

Since everyone had to take on multiple roles, Len and I also played nymphs (!) from the Comedia dell’arte, clad in translucent sheaths, whom Tunying, Simoun’s free-spirited alter ego, brought home to his apartment.

As a last-minute stunt, Len suggested we ditch our underwear. Guess why the actors from the other delegations flocked to our dressing room for photos after the show!

I didn’t see Len much for a few years after, except when we met at the theater to watch other plays. We spoke on the phone, though, and I knew when her body began to break down from illnesses.

Not that it stopped her; I would watch in awe as she zipped around on her scooter when she was no longer able to use a swollen leg.

There were surgeries, dialysis, hospital stays—but she was almost always in high spirits, despite the challenges, and grateful for her blessings. When I was stricken with cancer in 2013, Len actually offered financial help, aside from moral support.

Recently, Len returned to painting as some kind of therapy; she had picked up the brush in her younger years. Her still lifes, always vivid and full of color, were exhibited in a fund-raising show last year, to help defray her medical expenses. Shax held down a great job, but the cost of treatment was heavy. In between, Len gave her works to friends; she painted for me a vase of flowers.

In between hospital visits—“Aaaand we’re back!” Shax would announce on Facebook, where he often posted hilarious selfies of himself driving while Len and the kids snoozed—we formed an occasional Sunday afternoon foursome with lighting director (and one of Shax’s mentors) Monino Duque, hanging out at Solaire for merienda or to catch a show.

In between, I would sometimes talk to Len when she was feeling down from all the treatment.

The last time I saw her, in hospital, she said she was tired of being ill—but after a few days, she was back home, grateful and still taking each day as it came.

I had a feeling that Len would go ahead of many of us, because while she was a force of nature, her body could hardly keep up anymore. When I think of those heady days—of Floy’s ingenious play and how Tony Mabesa turned it into a sensuous spectacle, and of us partying till we almost dropped, but always reveling in the joy of performing—I think of the friends and artists who have gone ahead.

Now I will think of Len and her crazy Doña Victorina, eyes wide, belly shaking with laughter. As the Broadway song goes, she will stay with me always—“like a handprint on my heart.”