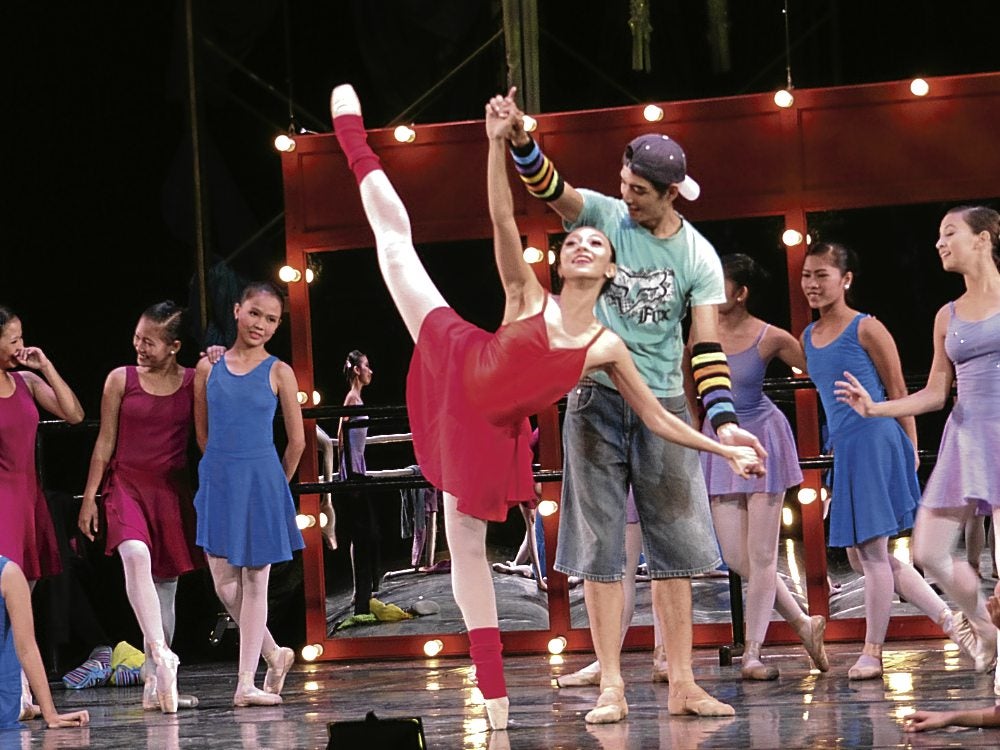 It’s funny how an artistic endeavor that is haphazardly put together would turn out to be one of the best performances of the season.

Ballet Manila’s “Kutitap,” one of the concert pieces from its holiday offering, “Maligayang Christmas,” was completed the day before the start of its two-weekend run by nine resident choreographers: Lisa Macuja-Elizalde, Osias Barroso, Rudy de Dios, Gerardo Francisco, Niño Guevarra, Michael Divinagracia, Ricardo Mallari, Romeo Peralta and Roduardo Ma. It became a huge success with its audience that it was singled out to become Star City’s official holiday show at the Aliw Theater in Pasay City until the first week of January. (Entrance is free for those who have purchased entrance tickets at the amusement centre.)

The modern ballet’s plot is like a telenovela. Jessie is an angel disguised as a paralytic and is on a secret mission to find good people in the world.

He meets Pedicab Driver, who calls his OFW dad regularly via Skype and is in love with Ballet Teacher. Ballet Teacher is also being courted by Rich Suitor whose parents (Rich Mom and Rich Dad) bully Jessie. The parents have a change of heart and give Jessie a new set of crutches that turn into angel wings after a visit from limping zombies in their sleep (yes, zombies). The OFW father comes home while Pedicab Driver and Ballet Teacher end up together and they all live happily ever after.

Lighting by Jaime Villanueva was as festive as the dancing by the entire cast. Notables included Mylene Aggabao as well-poised and demure Ballet Teacher and Nazer Salgado shy and unassuming Pedicab Driver.

Alvin Santos has his foot extending an inch away from his head again as the flexible paralytic, Jessie. Marvin Medina is the gangly and awkward Rich Dad (although should moneyed grown-up men really be so?).

Laughter would not be as loud and uncontrollable without Jonathan Janolo as Rich Mom in his signature pointe shoe-wearing Tacky Mom in Drag roles.

The hip-hop and ballet showdown in the clever ballet classroom scene (a huge floor-length mirror and ballet barres) was reminiscent of movies like “Step Up.”

The overall Tondo-esque atmosphere of “Kutitap”—complete with pedicabs, sidewalk vendors peddling their wares and scaffolding structures strewn with parol and Orocan drums—seemed to have influences from the UK-based percussions group, Stomp, who recently performed in Manila.

It seems that BM has found itself yet another hit show in “Kutitap,” where diva conflicts and severely contrasting human living conditions might just inspire an actual telenovela run.

“Kutitap” had been a huge shift from classical pieces presented earlier in the concert that included divertissements from full-length ballets like the “Pas d’Action” from Act 2 of “La Bayadere” and the “Diana et Acteon” pas de deux from Esmeralda.

The few female corps de ballet effortlessly delivered strong dancing in the Bayadere piece set to a Ludwig Minkus composition. To these ladies, it is as if the Marius Petipa and Vakhtang Chabukiani grand jetés and side arabesques are mere play. Hana Oh as Gamzatti and Harold Salgado as Solor—both in cream-colored tulle, chiffon and gold livery—led the group expertly and wowed the audience with their varieties of fouettés so early in the show.

A steadier Hana, who is from Korea, had already been eye-catching in the recent Swan Lake production. She looked less nervous this time and it helped to have a confident-looking dance partner like Harold, whose smiling eyes, slightly opened lips and little tilt of his chin during the vignettes felt reassuring and light.

Tiffany Chiang as the Greek goddess, Diana, and Romeo Peralta as the hunter, Acteon, were also well-applauded while showing off vastly improved technical skills and lifts while wearing stunning Grecian garb in this Agripina Vaganova choreography that was set to music by Cesare Pugni.

The audience was also treated to works by guest choreographers Hazel Sabas-Gower and Manuel Molina, both former dancers from the Ballet Philippines and have made their mark in popular companies abroad.

Meanwhile, the world premiere of Molina’s “The Light (Faith for Salvation)” garnered mixed reactions from the audience. Overheard were contrasting positive and well-meaning reactions.

The holiday season, passé music (“The Prayer” by Celine Dion and Andrea Bocelli), and costume colors for three dancers (red, green and yellow over white unitards) made it obvious that the dance is a pas de trois about the Holy Family. The Orange-y swath of curtains parting at the center of the stage where the third dancer in yellow came out of must be symbolic of creation and a woman’s womb. But there must be a better way to illustrate a message about “the reason for the season.”

Concluding performances for this ballet season include Ballet Manila’s “Lab Ko ’To” at the Aliw Theater and Ballet Philippines in “Pusong Wagas” at the CCP Little Theater. Both shows will run from Feb. 17-19.