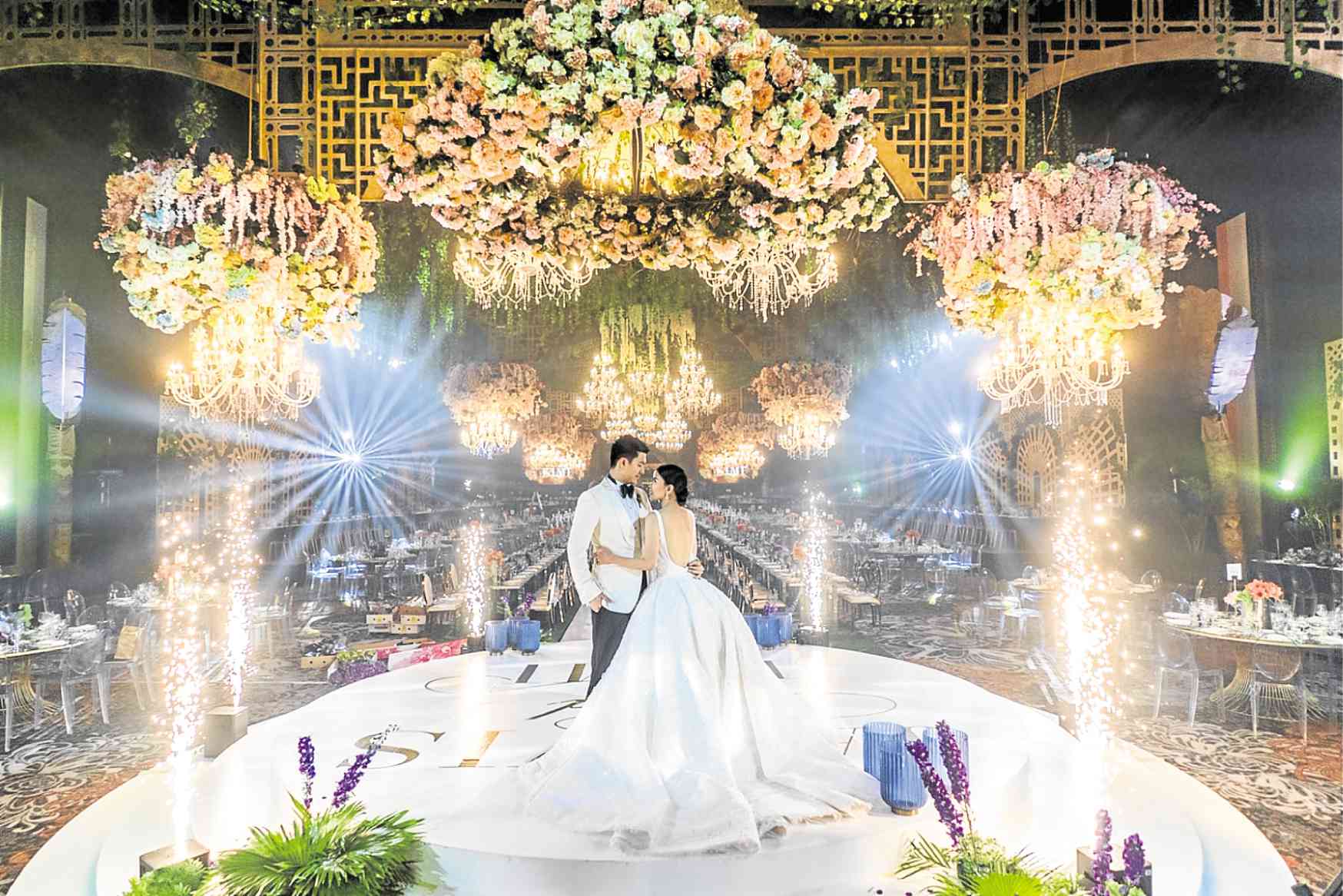 For the reception, event stylist Gideon Hermosa transformed the cavernous grand ballroom of the Marriott into a tropical wonderland, incorporating oriental details in homage to the couple’s Chinese heritage. —Photos courtesy of Kimi Yap Sy

The golden mirrored floor lit up, like magic, with each  step she took toward the altar, her path framed by a forest of baby’s breath—5,000 fresh stems in all.

Kimberly Ann Yap had long imagined this moment—walking to her dashing groom, Jarvis Sy, in a dream couture dress adorned with thousands of Swarovski crystals, its five-meter-long train fanned out dramatically behind her.

It’s a scene straight out of a modern fairy tale.

On Oct. 13, the celebrity fashion stylist Kimi—one-half of the sister styling duo, Kimi and Boop Yap—wed Jarvis, her college sweetheart, in settings so resplendent those who witnessed it aren’t likely to forget anytime soon.

One might say, the wedding tableau could rival the wedding scene in “Crazy Rich Asians,” which the bride actually worked on a year before. (But more on that later.)

The double happiness symbol in the backdrop was made of assorted fresh flowers reaching up to 12 feet. Kimi donned the same runway Marchesa dress Constance Wu wore in the wedding scene in the “Crazy Rich” movie.

For her dream wedding dress, she chose Dubai-based Michael Cinco, who also made her sister Boop’s own bridal dress three years ago.

It was the Yaps who commissioned Cinco to make Kris Aquino’s yellow dress for the “Crazy Rich” movie. Kimi was on the set in Singapore when their celebrity client shot her scene. Aquino stood as sponsor in the Sy-Yap wedding.

She carried a bouquet of lilies of the valley with a photo of her late mother, Elizabeth Ley Yap.

The groom wore a custom Tom Ford white tuxedo; the bride changed into a sleek white Tom Ford dress for the reception. Her dad James walked her to the altar, also in custom Tom Ford.

Her entourage wore Martin Bautista dresses the color of a young leaf—the same shade as the dress she wore when Jarvis proposed at Amanpulo last year.

For the wedding reception, Hermosa transformed the cavernous grand ballroom of the Marriott into a tropical wonderland, incorporating oriental details in homage to the couple’s Chinese heritage. They had 1,200 guests, and the couple “envisioned a seemingly intimate setting with a secret garden feel, wherein guests would not feel drowned by the vastness of the ballroom, but instead feast on the beauty of the elements of the wedding,” said the bride.

Guests were serenaded by South Border, Moira de la Torre and Jason Dy, with music by the Manila Philharmonic Orchestra.

“I think the key to having a splendid wedding and a beautiful disposition is really to let go and trust your wedding suppliers. They know best,” Kimi said. “There’s no such thing as a perfect wedding, just as there is no perfect day. That’s one of the expectations we’ve had from the very start, hence we embraced all the changes and everything that happened that day.”

Like a good big sister, Boop “covered everything we couldn’t, and so much more,” said the bride of her sibling (they also have a brother, Jason). “She’s the best sister anyone could have.”

The newlyweds are honeymooning in South Africa—with the bride’s family along for the ride.