In liberal Washington, dating leaves conservatives with much to desire | Lifestyle.INQ ❮ ❯ 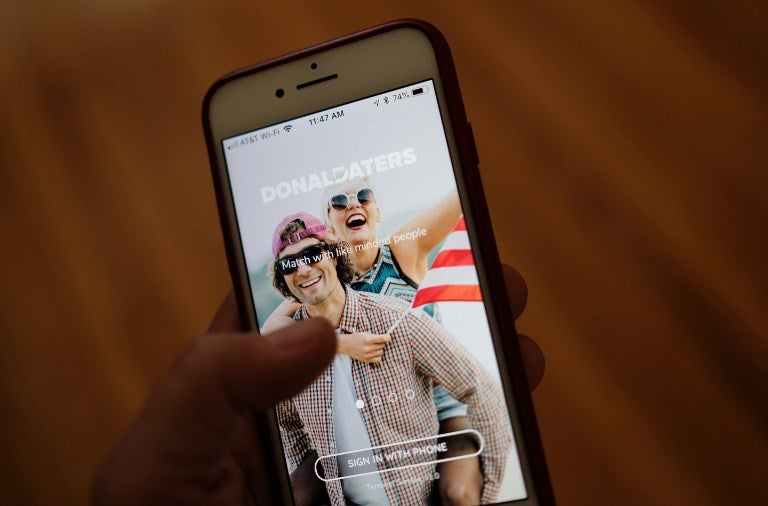 A person looks at DonaldDaters, a new dating phone app, on October 17, 2018, in Los Angeles. - DonaldDaters was supposed to help lonely conservatives find each other discreetly. But the app leaked its database of users on launch day, a report said October 15, 2018. With the slogan "Make America Date Again," the app targets the "American-based singles community connecting lovers, friends, and Trump supporters alike," its website says. The app had just over 1,600 users on its first day of operations, technology news site TechCrunch reported. (Photo by CHRIS DELMAS / AFP)

In liberal Washington, dating leaves conservatives with much to desire

WASHINGTON — Dante Bucci is a 22-year-old marketing student who lives in one of Washington’s most hip neighborhoods.

But as a Republican in one of the most liberal cities in America, his political views are kryptonite in the US capital’s dating world, where he frequently finds himself attracted to Democrats.

“A lot of first dates. Not a lot of second dates,” Bucci says of his love life these days. “I think Donald Trump has a lot to do with that.”

In the 2016 presidential election, Trump earned… four percent of the vote in the District of Columbia.

And with November’s key midterm vote stoking political tensions, Republicans like Bucci are finding that romance is all but dead.

“They want to date someone that they can agree with on some issues,” laments Bucci, who supports abortion rights and gay marriage and calls himself a moderate Republican.

“‘I’m a Republican but…’ — I’ve started so many sentences that way.”

Enter: DonaldDaters.com, a website connecting those who support the Republican president.

“I felt a real need for this app,” said Emily Moreno, a 25-year-old Republican who founded the site after speaking to many of her friends.

Moreno told AFP that many people in Washington said if they mentioned working for Trump or Republican causes to a potential love match, “the date is shut down — it’s a deal-breaker.”

Four days after launching the site in mid-October, Moreno said the app had been downloaded 20,000 times.

One senior adviser for a Republican member of Congress tried the app because he has found dating as a gay Trump supporter a particular challenge.

He noted that the dislike goes both ways.

“If someone was super into Hillary Clinton, I would be turned off by that,” he explained.

On other widely used dating apps like Tinder or Bumble, Bucci said he found nothing but landmines.

According to a sample of several dozen Tinder profiles consulted by AFP, many women urged Republicans guys to swipe left — meaning to pass them by.

Kendall, 23, is one of those women. “Allergic to bees and Republicans” reads the bio on her Tinder profile.

Bucci says that so many of his first dates go off the rails with the first question: “Did you vote for Donald Trump?”

When he says yes, he gets all kinds of responses, not all of them pleasant.

“Sometimes they probe me into why I voted Trump, as if it’s a murder and I’m on trial,” he said, adding that his friends are having similar experiences. “It really is tiring.”

“Sometimes, it’s ‘Whoa, I thought you were better than that.’ Other times, it’s ‘You seemed like a nice person.'”

One of Bucci’s friends even had a drink thrown in his face.

‘Not a normal city’

As a result of the difficult dating scene, Bucci — who works for a high-profile conservative organization while pursuing his studies — is considering leaving Washington for good.

He says his lackluster love life is about 20 percent of his reason for wanting to go.

“This is not a normal city,” he says. “You can’t even go for a drink without talking about the Supreme Court or the deficit.”

Moreno, who grew up in Ohio but lives in Washington, says whenever you meet someone in the US capital, you get asked two things: “Where are you from and where do you work?”

While Moreno is now seeing someone, she said her past dating life left something to be desired.

For Bucci, the polarization of America has basically transferred to the dating pool.

“We are in a society where you can only date or be with people that think like you,” he said.

The only other option is one he says his friends have used: lie about who they voted for.