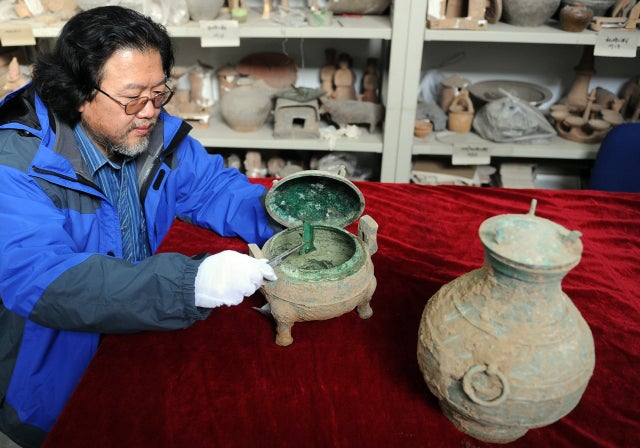 A Chinese archaeologist shows off the soup and bones discovered in a small, sealed bronze vessel discovered in a tomb during an excavation in Xian, northern China's Shaanxi province on December 10, 2010. Image: AFP PHOTO/CHINA OUT

Archaeologists in central China Tuesday believe they have unearthed a 2,000-year-old pot of wine that had been sealed and buried in a tomb.

About 3.5 liters (118 ounces) of the yellow liquid, which officials said smelled strongly of Chinese wine when they poured it out, was discovered in a bronze pot in Henan province, the official Xinhua news agency reported.

The liquid will be sent for further tests to confirm its alcoholic content, said Shi Jiazhen, head of the Institute of Cultural Relics and Archaeology in Luoyang city.

A lamp in the shape of a wild goose has also been found in the tomb, Shi said, along with human remains belonging to the tomb’s occupant.

The wine is believed to date to back to the Western Han Dynasty (202 BC to AD 8) although the Xinhua report did not detail how it had been sealed and kept from evaporating.

But there have been other similar alcoholic discoveries from that period, where liquor made from rice or sorghum often kept in elaborate bronze vessels were a big part of ceremonies and rituals, Xinhua reported.

In 2010, archaeologists discovered a 2,400-year-old pot of soup in a tomb that was being excavated to make space for an extension of the airport in Xian, home to the country’s famed ancient terracotta warriors. NVG