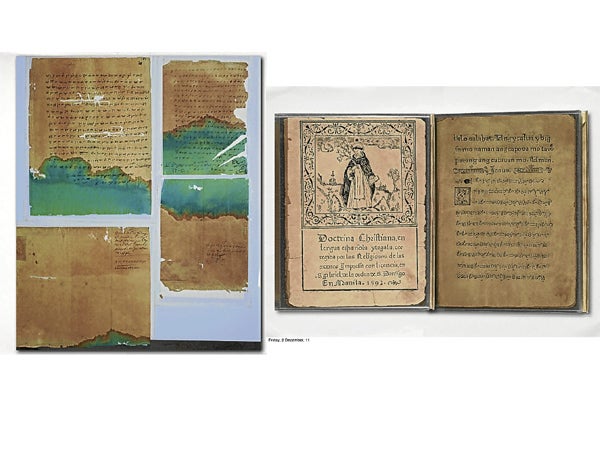 “DOCTRINA Christiana,” printed by the Dominicans in 1593, contains the ancient Philippine alphabet. At left, a sample of the baybayin syllabary from an ancient legal document at the UST Archives.

The University Of Santo Tomas (UST) has the biggest collection of extant ancient baybayin scripts in the world, according to Christopher Miller, a Canadian linguistics scholar who has been studying the ancient Philippine syllabary at the UST Archives and UST Heritage Library.

Miller was a plenary speaker during the International Conference on the Heritage and History of the University of Santo Tomas recently.

Miller credited the Spanish colonizers, especially the Catholic missionary friars, for preserving the ancient Filipino alphabet and said UST’s large collection of documents using the syllabary should disclose to historians and researchers glimpses of Philippine prehistory at the time of the Spanish contact.

In his presentation, titled “Filipino Cultural Heritage in the UST Archives: Baybayin Script in 17th Century Land Deeds,” he said a lot of work needs to be done. He said the samples should determine, for example, if the writing system was widely used in the archipelago.

In addition, while also adopting the syllabary, the Spaniards might have incorporated some of their European practices.

“How accurate were their reproductions?” Miller asked.

Miller said he had also discovered that baybayin had formal usage among the locals, and between them and the colonizers. He saw in the archives land deeds, petitions, testimonies and legal proceedings written in the old script.

Showing that the missionaries did not destroy the Filipinos’ pre-Hispanic culture, Miller said the first book printed in the Philippines, the Dominican catechism “Doctrina Christiana,” used the baybayin. The book was printed in 1593 by the Dominican press, later to become the UST Press.

Miller was just one of the many international scholars who have been studying the documents at the Archivo de la Universidad de Santo Tomas (UST Archives).

“Though the records were assembled by the university, they remain relevant to places and cultures way beyond the streets of España and Dapitan,” said UST archivist Regalado José in his talk, “Treasured Piles of Paper: The Archives of the University of Santo Tomas.”

José is also commissioner of the National Commission for Culture and the Arts and head of the NCCA National Committee on Archives.

José said the UST Archives has custody of two very important microfilm collections: Archivo de la Provincia del Santisimo Rosario, which is the collection of 415 reels of microfilm copies of the originals in Avila, Spain; and the Philippine Canonical Records, a corpus of 6,000 reels of microfilm copies of canonical records of parishes all over the Philippines, except for the documents filed in the Archdiocesan Archives of Manila.

Also, student records, like transcripts of the students across the country, are conserved at the university archives, since the university served as the education ministry during the Spanish colonial era. These documents do not only include the grades in UST of the national hero José Rizal, but also his high school grades at Ateneo de Municipal.

“The UST Archives has an untold wealth of materials that can enrich study across continents. It is truly the silent yet potent link of the university to the world,” José said.

Another presentation in the three-day conference disclosed that UST also has in its collection “Book of Hours,” the medieval illuminated devotional book. Dr. John N. Crossley of Monash University, Australia, said he made the startling discovery when he was researching at the UST Heritage Library, the university’s repository of rare books, including an incunabula (book printed before 1500).

Notable paper was “Dr. José Rizal and His Music,” by Dean Raul M. Sunico of the UST Conservatory of Music and concurrently CCP president. It was a fitting tribute to the national hero on the sesquicentennial observance of his birth.

Older than the republic

With the theme “Pro Ecclesia et Pro Patria: Legacies and Traditions of a Quadricentennial University,” the international conference was meant to create a catalogue of the historical landmarks and contributions of UST and its alumni throughout its 400 years of existence as Asia’s oldest university and the second oldest Pontifical University in the world after the Gregorian University in Rome, Italy.

“It is high time that UST asserts and articulates the roles it has played in the various academic and professional disciplines that continue to define the Filipino as a people and as a nation,” said Michael Anthony Vasco, dean of the UST Faculty of Arts and Letters.

The presentations, said history professor Maria Eloisa de Castro, convener of the event, showed that “as an institution of higher learning, which antedates the Philippine Republic, UST continues its role [in advancing learning].”