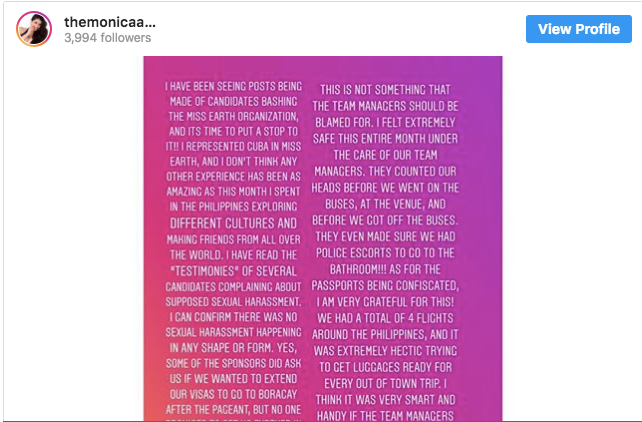 Miss Earth Cuba counters: ‘There was no sexual harassment’

“I can confirm there was no sexual harassment happening in any shape or form,” Miss Earth Cuba 2018 Monica Aguilar said in an Instagram post on Thursday.

Aguilar made this statement after three fellow Miss Earth candidates spoke up about a sponsor who asked for sexual favors during the pageant.

She acknowledged that they received an invitation to Boracay, even sharing the screengrab of the text message in a separate Instagram post.

“Yes, some of the sponsors did ask us if we wanted to extend our visas to go to Boracay after the pageant, but no one promised to get us further in the competition through ‘sexual favors,’” Aguilar said.

Aguilar also defended the team managers of the pageant, saying she felt “extremely safe” under their care.

She also urged her Instagram followers to “stand with Miss Earth and against sexual predators” because the pageant “was not at fault.”

“Saying that what happened to us girls is Miss Earth’s fault because they were the ones that provided the sponsors is the same thing as saying ‘it is your fault your son committed murder because you gave birth to him,’” Aguilar added.