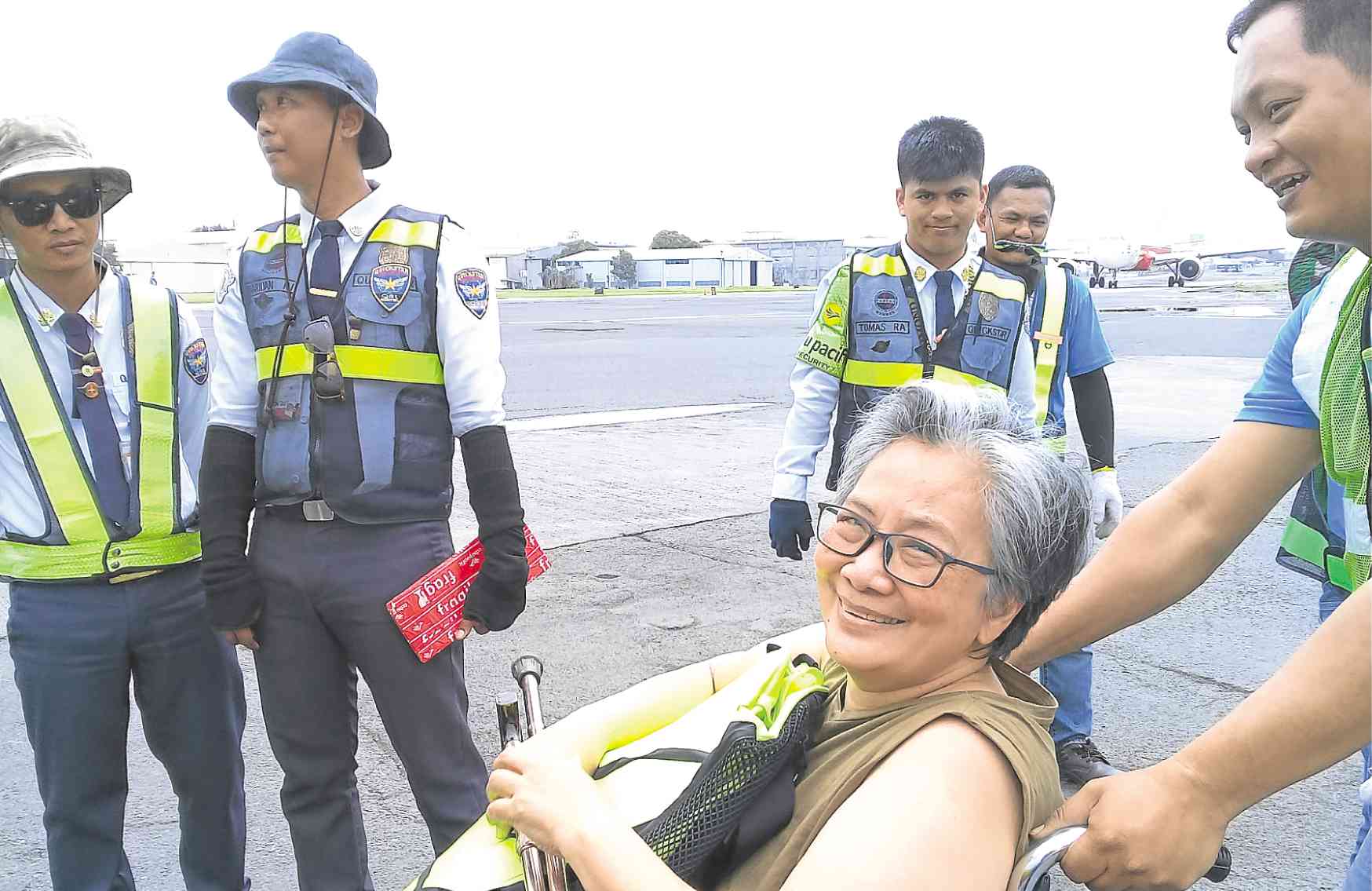 A PWD’s guide to enjoying Palawan

Whoever said fun times for a senior with disability are over will eat her words and get dunked in Kayangan Lake by me who remains still tan after four days in Palawan.

Persons with disability (PWD) need not be marginalized, and deserve as much as courteous assistance from the tourism industry.

I bless elder cousin Beng Valdellon, a balikbayan from Burke, Virginia, who always spends her holiday money in the Philippines, and invites our gang of panganay cousins to share her loot.

In 2015, we went to Puerto Princesa where we were awestruck by the underground river’s wealth, and sunburned while dawdling on a dune with the finest sand in the middle of the sea.

But things were different this most recent trip. I was hobbling on a practically deformed-by-osteoarthritis knee joint and depended on a cane to get around.

Beng’s invitation stood firm—we were going to have what could be a last hurrah before all our knees give way to aging’s inevitable curse.

Thus, the request to La Natura Resort on Mabintangen Rd., Barangay 6, Coron, to billet us in a ground-level room.

Was there air-conditioning? Nope, but we had a large ceiling fan that did the wonders of ventilating the room.

From the get-go, the staff of Cebu Pacific prepared a wheelchair for me and an aide pushed me around and helped me to my seat in the departure area.

Climbing the short staircase to the plane was a cinch with a security guard assisting me from behind to break any misstep, just in case.

The flight attendants were as solicitous, helping me store my cane and carry-on bag in the luggage bin. They ensured that there was a wheelchair awaiting me when it was time to disembark at Francisco B. Reyes Airport in Busuanga.

The PWD toilet in the airport was neat and equipped with handrails and tissue paper.

The highway leading to Coron was generally smooth, except for a few rail bumps that are meant for cattle crossing.

When the van took a left to Mabintangen Road leading to the resort, it was a rough ride over crater-wide potholes. Barangay funds still need to be poured into that dirt road, but come to think of it, other holiday seekers, especially those foreigners, may find the road with the surrounding flora and rustic views of nipa huts tres exotique.

Waiting for us at La Natura’s front desk were cool towels to wipe away the weariness of early-morning travel and tall glasses of fresh calamansi juice with organic bamboo straws.

We ordered an early lunch from a mixed menu that offered Filipino, Italian, American and other popular dishes. The chicken curry in thick coconut sauce came highly recommended.

While waiting for our room to be cleared, we had occasion to admire the garden where butterflies as large as our hands flitted among the flowers, particularly the blooming kamuning, our first time to see one, familiar as we are only with the name of a Quezon City district.

The architecture of the rooms is inspired by the nipa hut with palm fronds for the roofing. We entered through glass and screen sliding doors to a cool place.

Partly because of the unpolluted rural setting, the air wasn’t humid even if the fan was still turned off.

The resort arranged tours with the tour operators in the town proper. Everyone met at the pantalan or pier. We got there through the resort’s suki tricycle driven by Jayron, who believed in going ecology-wise with his electric vehicle. Sure, it may not move as fast as the ones fueled by gas, but it doesn’t harm the environment.

For the city tour, one can have the van exclusively to one’s group or one can have “joiners.” The latter meant that one had strangers sharing the ride and tour, and following the itinerary.

We were with two Taiwanese girls who insisted on catching the sunset at the top of Mt. Tapyas, which could be reached through 721 steps. Naturally, we sat that one out. It was too early for sunset.

The driver said the girls could be dropped off toward that hour later, after we finished our itinerary which included stops in a souvenir shop for the usual bags of cashew nuts, a visit to St. Agustin’s Church where we would have wanted to light candles for our beloveds, but no one was selling candles.

Last stop as the afternoon moved to evening was Maquinit Hot Spring in Sitio Maquinit, Barangay Tagumpay, accessible through paved and unpaved roads.

Again there were gentlemen-guides who volunteered to assist me gingerly get down for more than an hour’s soak in the 30°C pool. There were concrete seats surrounding the pool so one could sit and relax and let the therapeutic waters do their healing, while we watched the full moon rise over the trees.

By the time I emerged from the waters, I could feel the heaviness from my aching joints dissipate. Why, I could almost walk straight without a cane! This must be how pilgrims felt after visiting Lourdes, France.

The next day was set aside for what was called The Ultimate Adventure. This involved island-hopping to several destinations in one full day. At least four able-bodied men helped me board the motorboat.

The same number of men also kept me secure and safe as I climbed down the ladder to the sea while wearing a life jacket. They were there to give my buttocks a push when it was time to leave the waters. Coron’s waters are temperate and perfect for just swimming around or cycling one’s gravity-free legs.

The third day of our stay we were rained in. Outdoor play was ruled out. I settled down with a book, Rachel Friedman’s “A Good Girl’s Guide to Getting Lost.”

When it was time to return home, it was back to the wheelchair to board, one hour of flying time, then getting off the plane to another wheelchair.

Smile! I just crossed another trip off a bucket list. But until when? —CONTRIBUTED