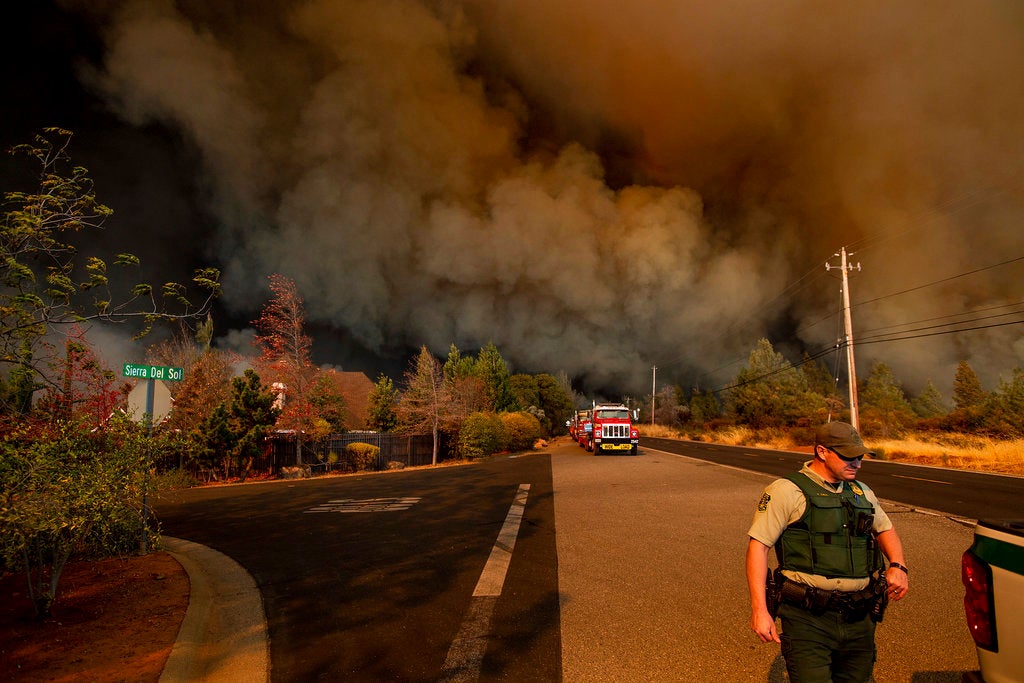 The Camp Fire rages through Paradise, Calif., on Thursday, Nov. 8, 2018. Tens of thousands of people fled a fast-moving wildfire Thursday in Northern California, some clutching babies and pets as they abandoned vehicles and struck out on foot ahead of the flames that forced the evacuation of an entire town. (AP Photo/Noah Berger)

The wildfire in Paradise, California sent residents fleeing for their lives, leaving homes, vehicles and belongings razed to ashes.

Among the tens of thousands of evacuees was a family driving away from Camp Fire’s large flames, which would incinerate the entire town in less than a day. Camp Fire is one of three wildfires that blazed through California.

READ: Deadly fire leveled a California town in less than a day

Dad Joe Allen captured their drive towards Chico, California, as fire licked away by the roadside and several cars went through the orange haze. The video was shared via Facebook by his wife Whitney on Nov. 8, Thursday. She was driving a different car with another daughter, reported NBC News on Nov. 10.

This was us leaving paradise not even an hour ago headed down skyway. I want everyone to know how much I’m thinking of you guys who are still trying to merge out of town. More than likely we won’t be coming home to our house, and many others won’t be as well. I’ve been updated, the hospital is on fire, and all of this breaks my heart. Please everyone get out safely. ❤️https://www.gofundme.com/camp-fire-damages?fbclid=IwAR3m5TegfQn1K6cfGTZ3B1jShxMWAQDC8mKSA2EcisuhZ2v-wv-DxG_T78Ihttps://www.gofundme.com/allen-family-fire-funds

In the vehicle, an exchange between him and daughter Olivia could be heard.

“There’s so much fire here. We’re gonna get on fire,” said Olivia.

After some time, Olivia voiced her concern again about the fire.

“We’re gonna get out of here, and we’ll come back when it’s more Princess Poppy, OK?” her dad assured her, referring to the upbeat character from the movie “Trolls”.

When most of the fire is past them and only smoke is seen ahead, he informed her that “We’re out of it.”

Whitney revealed on Facebook that her hometown and childhood home where her parents lived had burned to the ground. She described her parents’ home as a second home for her own children and that she had planned to raise them in Paradise.

State officials estimate that 200,000 people in California were forced to evacuate due to the wildfire. JB

Rich or not, homeowners await word of California wildfire’s toll