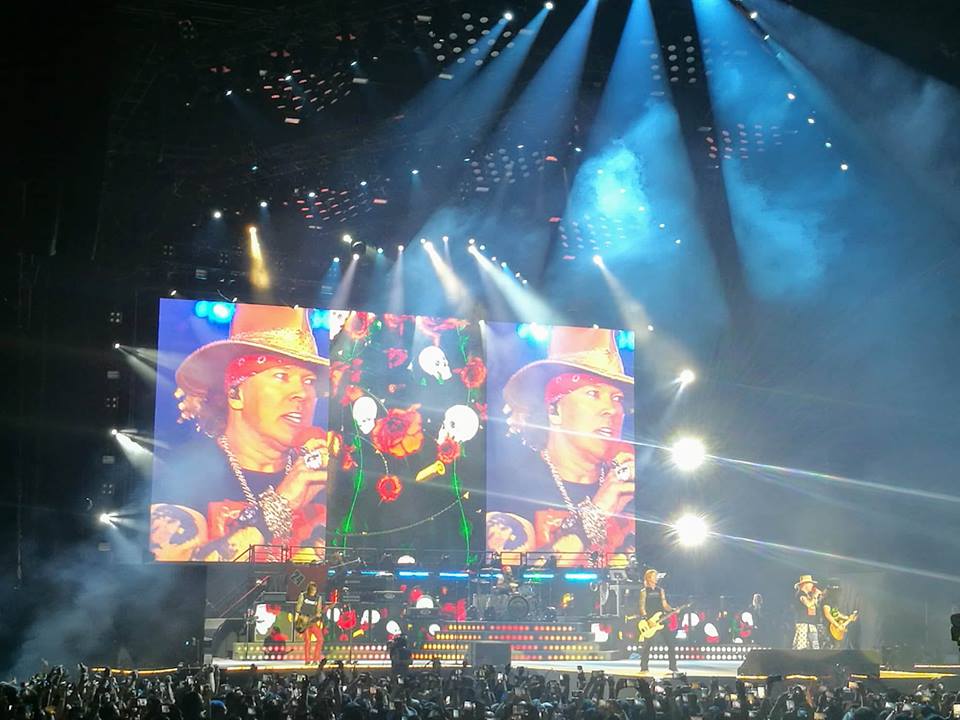 Axl Rose, Slash, Duff McKagan and the rest of Guns N’ Roses’ present incarnation performed like a well-oiled machine Nov. 11 at the Philippine Arena–with Rose pausing only after the first part of a three-hour show to greet the crowd with a shy-sounding “How ya doin’?”

Rose, the American band’s controversial frontman notorious in the past for tardiness and unpredictable behavior, personified professionalism and showmanship.

Belying his age and excess weight, the 56-year-old lead singer was all over the stage — running, dancing and egging on the audience to enjoy the experience of an authentic rock ’n’ roll gig. His shrilly pipes — which defined heavy metal’s signature vocals pioneered by Led Zeppelin — was intact.

Slash, the band’s lead guitarist who, along with bassist McKagan, is back in GNR after parting ways with Rose in 1991, played with ferocity and passion. Wearing a creepy “Tales From the Black Lagoon” T-shirt, Slash’s solos were marked by speed but didn’t lose the spirit of spontaneity.

McKagan’s keeping time sounded effortless. Introduced by Rose for a spot number on a cover of The Misfits’ “Attitude,” McKagan–who resembled David Bowie in his later years–began with a hilarious spiel: “Manila, ta**ina!”

Richard Fortus played rhythm and second lead guitar with confidence, at times looking like Ron Wood of the Rolling Stones while sporting a black tee printed with the name of British punk band The Damned.

The combination of long-time GNR keyboardist Dizzy Reed, drummer Frank Ferrer and new member, second keyboardist Melissa Reese, created a thick layer of sound for GNR, which was just right for an enormous venue like the Philippine Arena.

The audience, all looking pumped up with excitement and energy hours before showtime, erupted in cheers upon hearing GNR hits especially “Welcome to the Jungle,” “Sweet Child O’ Mine” and “November Rain.” But the more serious fans were doubly delighted with the band’s covers of Wings’ “Live and Let Die,” Velvet Revolver’s “Slither,” Soundgarden’s “Black Hole Sun,” Bob Dylan’s “Knockin’ on Heaven’s Door,” The Who’s “Seeker” and parts of Pink Floyd’s “Wish You Were Here.”

Even the more senior members of the audience were thrilled to hear Rose paying tribute to Glen Campbell via “Wichita Lineman,” and Slash surprising the unsuspecting with an instrumental version of “Speak Softly Love,” the theme from “The Godfather.”

In a nutshell, this concert was rousing, expansive and historic. Its significance lies in two aspects: The 45,000-strong crowd is, by far, the biggest ticket-selling attendance at the Philippine Arena in recent years, and the show is part of GNR’s ongoing “Not In This Lifetime” tour–said to be the fourth highest grossing tour of all time, with box-office receipts reaching almost $500 million to date.