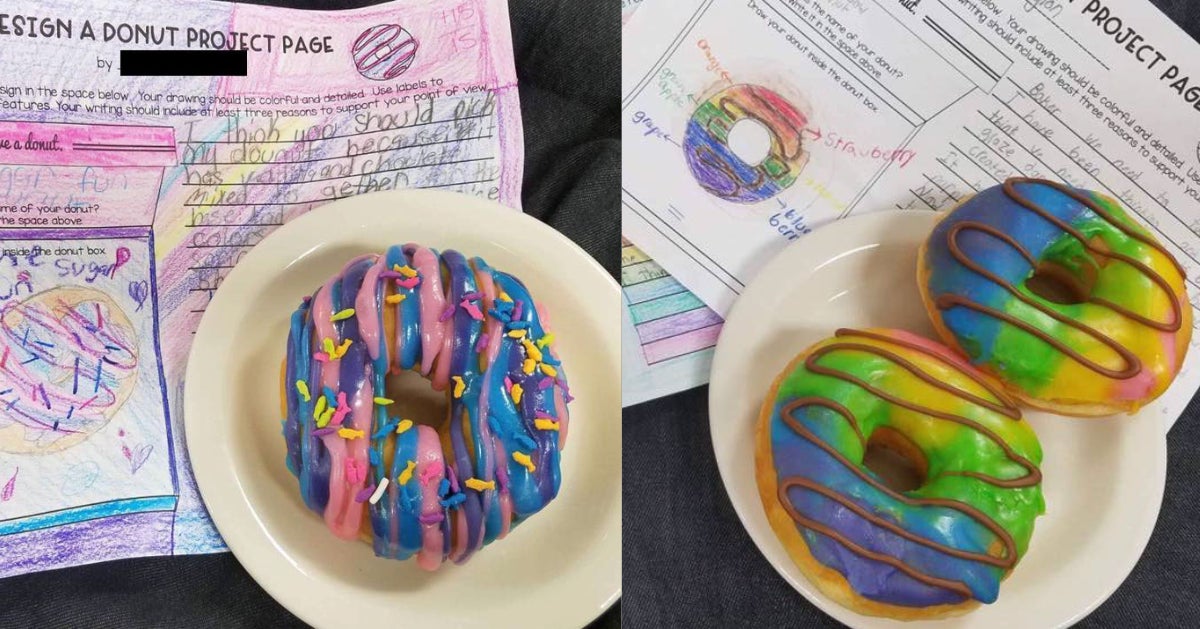 One elementary school teacher thrilled her students when she made their ideas in a writing class come to life.

Amber Lyszkiewicz, 25, is on her first year of teaching at the Bremen Elementary-Middle School in Indiana, United States. Last Thursday, Nov. 8, she shared on Facebook that she asked her students two weeks prior to convince a bakery to create their doughnuts for a contest. The activity was part of their persuasive writing class.

Unknown to her 20 4th grade students, Lyszkiewicz asked a local shop called Over the Top bakery to recreate the doughnuts, following her students’ colorful designs.

“They told me as long as I didn’t place the order around the holidays, they would be happy to do it,” she told INQUIRER.net exclusively.

“They made their doughnuts early in the morning and then decorated them through the day. I picked them up in the afternoon so they were very fresh!”

The teacher took pictures of each doughnut alongside her students’ original concepts. “My students have no idea I did this, I cannot wait to see their faces tomorrow!” she said on Facebook. Her post went viral, racking up 30,000 likes as of writing.

She said she decided to get creative with the class to make writing enjoyable for her students. “It is hard to engage students in a writing lesson,” she noted.

After teaching them the basics of persuasive writing, she used an idea that she found on Teachers Pay Teachers, a website where teachers share educational resources. According to a Forbes report last July, two-thirds of teachers in the U.S. use the site.

She had not originally planned to have the doughnuts made — but as it turns out, her students’ original concepts were persuasive enough for her to tap a bakery. These included a “Disco Wacky Doughnut” made with chocolate, gummy bears and Oreos, and one called “Strawberry Festival” which had real strawberries on top.

Lyszkiewicz said that to keep the doughnuts a surprise, she hid them in a closet before the big reveal.

“I asked them if they remembered our doughnut writing, because it had been two weeks since the assignment, and they said yes,” she recalled.

“I told them, ‘Well, I had a bakery by my house create the donuts that you drew.’ Their faces were full of shock and happiness! They went crazy saying they couldn’t wait to see them and taste them!”

After handing each student their doughnut and paper individually, she said she felt overwhelmed with emotion: “I also felt appreciated because once they found out that I paid for the doughnuts myself; they were very grateful and thankful. They couldn’t believe I did something like this for them.”

“I would absolutely do this activity again because it made the lesson more meaningful,” she said. “It also confirmed for me that I am in the right profession because seeing them light up was worth everything!” JB