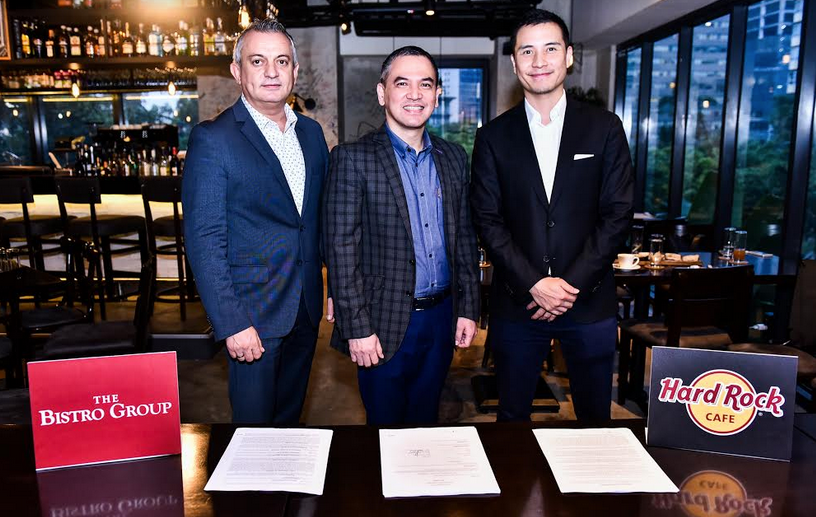 MANILA, Philippines – In partnership with The Bistro Group, Hard Rock International is bringing the brand’s one one-of-a-kind blend of music, entertainment, iconic merchandise and authentic, American fare back to the Philippines. The opening was recently announced by both companies following a signed agreement appointing The Bistro Group as the brand’s exclusive franchisee in the country. Hard Rock Cafe at Conrad S Maison in Pasay City is slated to open in December 2018.

“The Bistro Group is a strong industry player and with its robust portfolio of brands, as well as its track record for more than 20 years, we are confident that they will be a strong partner to help us take Hard Rock to the next level in the Philippines,” said Steve Yang, Area Vice-President, Asia-Pacific Franchise Development and Operations.
“Hard Rock has been in the market for 48 years and we are thrilled to continue to grow our business in the Philippines,” said Anibal Ferndandez, Hard Rock’s Vice-President, Franchise Operations and Development. “Exciting things are happening at Hard Rock Cafe and we want to expand our presence in high-growth markets frequented by locals and tourists. In 2017 alone, we launched cafes in Spain, Austria, South Africa, Andorra, Bolivia, India, Cambodia, Myanmar, Argentina and Nicaragua. In 2018, we are developing in Africa, Middle East, Europe, North and South America, South Asia and China, among others.”

Steve Yang and Anibal Fernandez made a visit to Manila recently to check the site and meet with The Bistro Group executives.

Jean-Paul Manuud, President and COO of The Bistro Group, stated, “We believe that this collaboration will spark growth for both The Bistro Group and Hard Rock Cafe. Having the brand in our family is indeed an achievement for us and Hard Rock is an iconic institution that is recognized widely. Its logo alone is easily the most recognizable the world, so we are very optimistic and excited over its forthcoming opening.”

The Bistro Group is a trailblazer in the local casual dining segment, developing and managing local and global restaurants for over two decades.