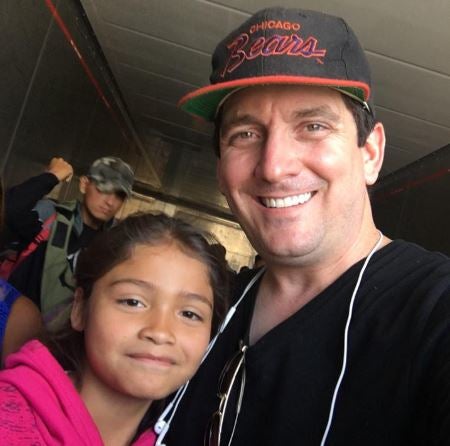 One pastor from Texas, United States has joined the migrant caravan in Mexico in a bold attempt to dispel the fears people hold over those seeking asylum and refuge.

Gavin Rogers joined the Central American migrant caravan last Nov. 10 and has been walking with them since, taking to Facebook to document his experience and interactions with the families and children, most of whom are from Honduras.

The migrant caravan, as it inches toward the U.S. border from Mexico, has since compelled U.S. President Donald Trump into sending over 5,000 active duty troops to the border to stave off the caravans. The number, however, could balloon to 15,000, more than double the number of migrants involved.

Many of the migrants have responded to Trump following his anti-migrant rhetoric, saying they are not killers nor criminals, but people who are just seeking for a good life for their families. Most of them have fled Honduras due to the violence, crime and corruption, while others left when they figured there were not any resources left for them.

Rogers took to Facebook on Nov. 10 where he did a live video, telling his audience that the migrants are heading out of Mexico City.

“It is an amazing sight to see, so many people and families who are walking from Honduras  through Guatemala through Mexico,” Rogers said, before becoming emotional.

“These families are escaping the violence and corruption where they are threatened each day, some of them are coming because there are no resources. It’s hard to put into words right now,” he continued to say, his voice faltering.

As per Rogers, the Mexico government offered the subway system to the migrants to help
them in their journey.

“We just got out of the subway,” he added. “The Mexican [government] allowed all the refugee families [to] use the subway to help get them further out of Mexico city so there are thousands and thousands in the Mexican subway system now.”

He pans his camera to the people around him, showing parents and children walking down the road, carrying their bags and bundles of clothes.

“I don’t really worry about the politics of this immigration crisis but all I worry about are all these families and the trauma they are going through to just live and survive,” he said. “A lot of the times we think they’re coming to have a better life… A better life for them means to [just] have a life…”

Trump, meanwhile, has since rejected the idea that he was “fearmongering” or using the migrant issue for political purposes. He also asserted to end birthright citizenship for children of non-U.S. citizens, claiming that the “so-called Birthright Citizenship” is not covered by the 14th Amendment.

Except, it is. JB

‘We are not killers’: Migrants in caravan respond to Trump