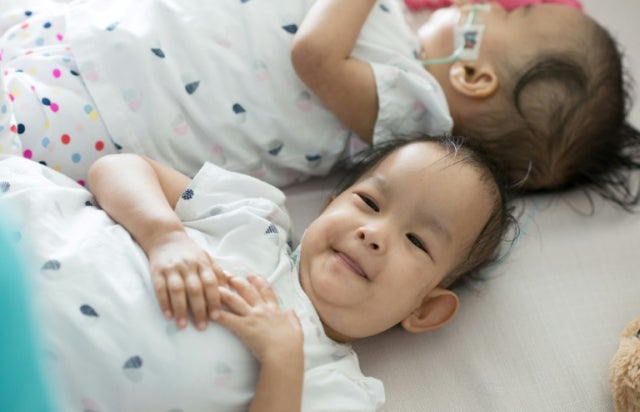 Six days after being separated in a long and complex operation, ex-conjoined twins Nima and Dawa are still not ready to go their own ways. Image: RCH / AFP

It took six hours for doctors to separate conjoined Bhutanese twins Nima and Dawa last week, but nurses said Thursday the recovering girls are still not ready to go their own ways.

“We try and have them a little bit apart, but they manage to sort of bum shuffle back together and have their legs intertwined always,” nurse Kellie Smith told reporters, six days after their operation.

“We did initially try and have them in two beds, but they didn’t like that at all, so they’re in the one bed together and just happy playing with one another, and it’s actually beautiful to see,” she said.

Chief Surgeon Joe Crameri of the Royal Children’s Hospital in Melbourne said the 15-month-olds, who had been joined at the torso and shared a liver, were “making good progress” despite “a few bumps we’re still smoothing out.”

“They’ll do little dance moves with their hands and what not, so it’s really nice to see them separated but they’re still really happy and wanting to be close to one another.”

“She was confused. They had their position earlier,” Tshewang Choden, a Bhutanese nurse traveling with the family, told the newspaper.

“We had to ask the nurses and doctors out there [which twin was which].”

The family arrived in Australia a month ago with the help of an Australian charity, but doctors had delayed the surgery to ensure the twins were well-enough nourished to survive the operation.

Bhutan is a poor Himalayan kingdom where doctors did not have the expertise to separate the girls, who were joined from the chest to the waist. AB