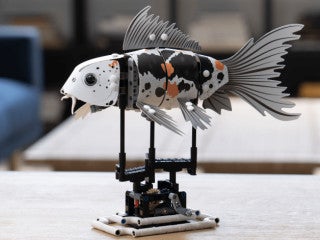 Lego came to recognize how adults could also benefit from piecing together lego bricks to engage their creative sides.

The upcoming Lego Forma product line will be made in partnership with crowdfunding website Indiegogo. The target is to think up mechanical kits that are simple to build but geared toward molding and easing the adult mind from stress.

Unlike the more traditional blocky brick models, the Forma line will include customizable skins to give adult builders more options to be creative without fussing over which tiny brick should go where.

The first kit to roll out under the Forma line will be one modeled after the koi fish.

Formo’s kit appears to consist of parts similar to the Technic line, which is already geared toward more mature builders–the difference being the claimed ease of construction for the Formo.

Whether the Formo kit will go mainstream is yet to be confirmed, but given the success of its crowdfunding campaign, Lego may consider mass production in the future.  /ra