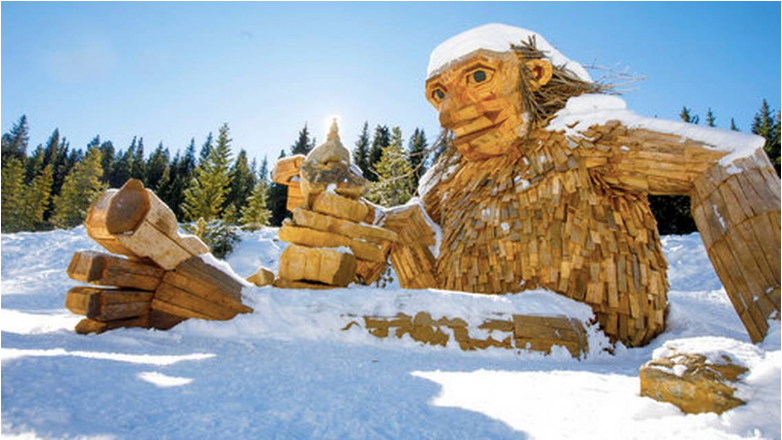 The large wooden troll, “Isak Hearthstone,” made by artist Thomas Dambo during Breckenridge International Festival of the Arts in August, sits in the snow Wednesday, Nov. 14, 2018, along the Wellington Trail in Breckenridge, Colo. The troll was created during the Breckenridge Festival of the Arts in August, but got so popular that it caused complaints from nearby homeowners due to tourists visiting, and demanded it to be removed. Image: Hugh Carrey/Summit Daily News via AP

Giant wooden troll removed in Colorado could get new home

BRECKENRIDGE, Colorado  — A huge wooden troll that proved to be too popular in a Colorado ski resort town is gone, but it’s possible the artwork could find another home.

Workers in Breckenridge used a chainsaw and backhoe to remove the 15-foot (4.5 meter) sculpture known as Isak Heartstone on Thursday.

The Summit Daily News reports that most of the work created by Danish artist Thomas Dambo was discarded or recycled but that some pieces were saved and put in storage in hopes of installing the sculpture somewhere else.

Town manager Rick Holman said officials are talking to Dambo and considering some possibilities but said nothing was imminent.

The work was installed on a hiking trail for a summer arts festival. Since then, throngs of troll-seekers have caused problems for nearby homeowners. MKH