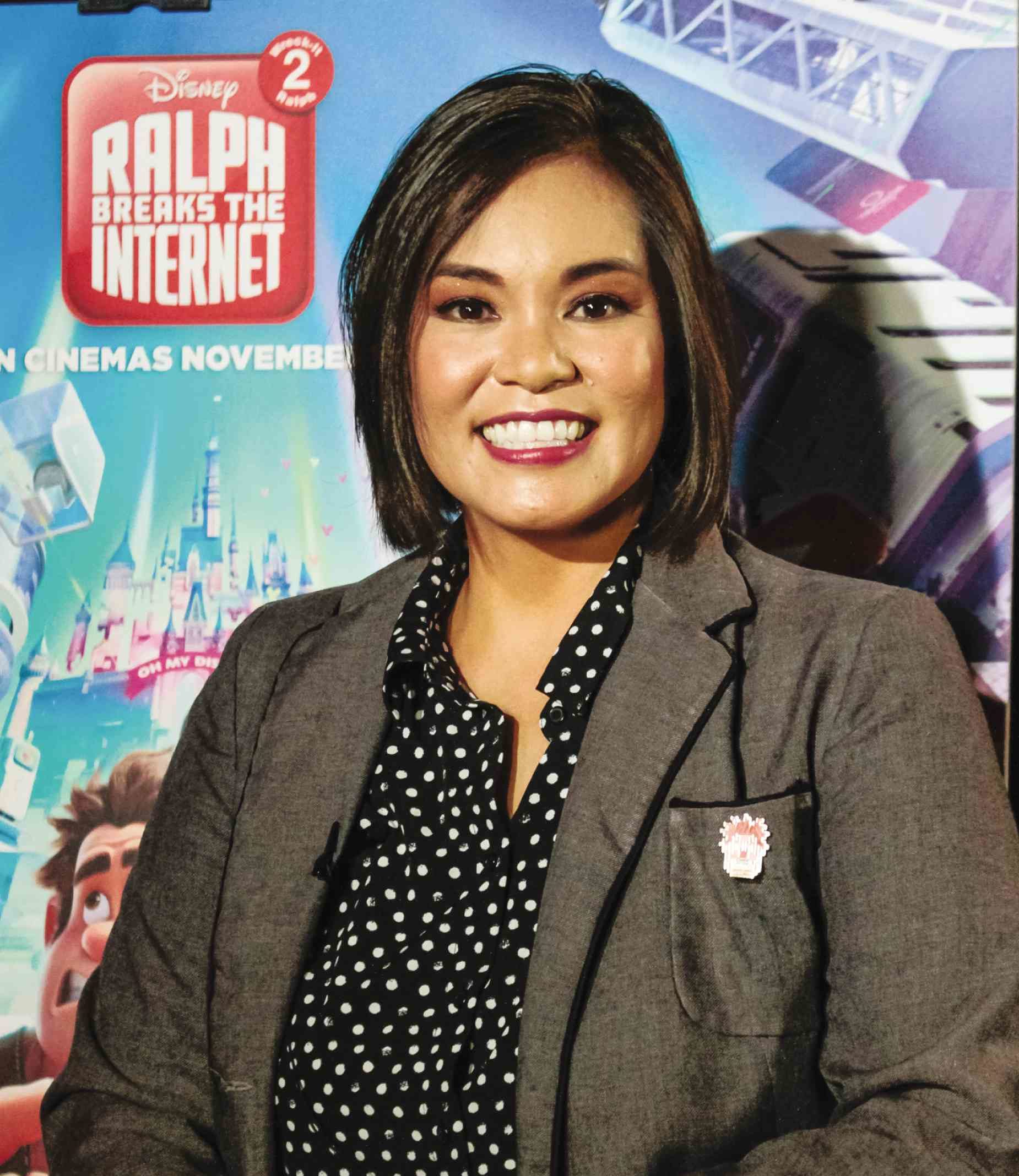 Fil-Am story artist takes us behind ‘Ralph breaks the internet’

Looking for another hilarious cat video? Want to see an insane amount of baby pictures? Or do you want to know which Disney dog are you most like? How about weight loss tips or a classic video game? “That’s what the internet was made for,” Yesss said  as she welcomed Ralph and Vanellope von Schweetz to the dizzying dimension of the world wide web.

Lovable misfits Ralph (John C. Reilly) and Vanellope (Sarah Silverman) of the 2012 Walt Disney film “Wreck it Ralph” are back in the silver screen as they step out of their 8-bit world and go on an epic internet quest. “Ralph Breaks the Internet” picks up when the steering wheel of Sugar Rush is broken and the retro game is threatened to discontinue. The duo travels through the arcade’s WiFi router to find the steering wheel they found online.

They meet Yesss (Taraji P. Henson), a trendy and knowledgeable algorithm who heads BuzzTube, and Shank (Gal Gadot) a badass character from Slaughter Race video game. Couple Felix (Jack McBrayer) and Calhoun (Jane Lynch) are also back. While “Wreck it Ralph” is an ode to the ’80s video game classics like Pac-man and Street Fighter, the sequel takes a 180-degree turn to the world of hashtags, trending, trolls, memes and LOL.

But how does one visualize the vast expanse of the internet? This daunting task of translating the hilarious script of “Ralph Breaks the Internet” from words to visuals falls on Josie Trinidad. The Filipino-American story artist whose resumé includes “Wreck it Ralph” and Zootopia” was recently in the Philippines to talk about the behind the scenes of “Ralph Breaks the Internet.”

Can you tell us about your job as a story artist for Walt Disney?

What we do is we work very closely with our directors and writers and we help them visualize their films with these loose, rough comic book like drawings because (in) animation we don’t have actors. We have to visualize the entire film before we move it into production.

How were you able translate the world wide web to a fun and visually appealing animated film?

It’s so interesting because the internet is something that we use every day and yet to visualize what this world might look like was a huge challenge because we didn’t know exactly where to start. So we started with a lot of research. We looked up how the internet worked and studied what it was like and what it means to send an e-mail.

We also went to a field trip in this building called One Wilshire in downtown Los Angeles. It houses all of the internet communication in all of North America, which is pretty astounding. Inside the building it was just wires and boxes, thousands of miles of wires. It doesn’t sound very interesting, but we started to visualize that these boxes and wires are different buildings and websites, and we started to come up with the citizens who lived on the internet—netizens—who would work at websites and would help us, the net users, navigate the internet.

Tell us about the Vanellope’s scene with all the Disney princesses!

That scene was written by our co-writer Pam Ribbon. At first we thought Ralph and Vanellope go to the internet and take quizzes (like) What kind of princess are you? We thought it would be funny to see Ralph and Vanellope, who think they’re exactly alike, find out that one is a Sleeping beauty and the other is a Belle and (the quiz results) would sort of confuse them.

Pam took this sequence and started to write it. The first pages were truly what the sequence became, so she sort of took that idea and went from there. I knew from those first pages that it was hilarious and we had to try it and thankfully everyone else agreed.

What do you love most about “Ralph Breaks the Internet?”

I love that Ralph is a guy who tries so hard to do the right thing and yet he cannot. He makes a lot of mistakes and he makes a lot of bad choices, but you understand that he’s coming from such a true place. He’s just being himself.

Disney’s “Ralph Breaks the Internet” opens in cinemas on Nov. 21.