The modern artists for whom the ancient Dutch bells toll | Lifestyle.INQ ❮ ❯ 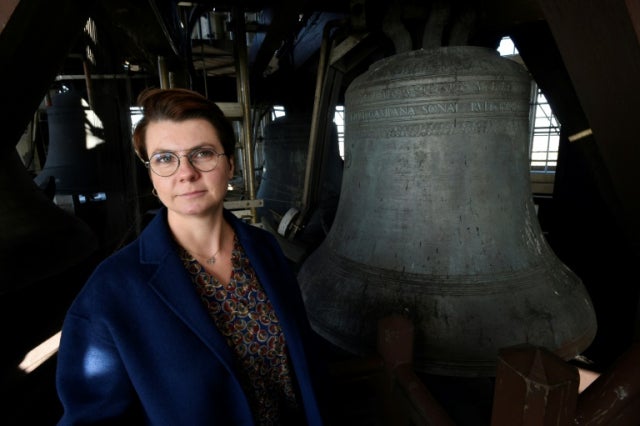 Malgosia Fiebig plays tributes to music legends such as Bowie and Prince on the carillon in the Dom Tower in the Dutch city of Utrecht. Image: JOHN THYS - AFP

The modern artists for whom the ancient Dutch bells toll

When a musical legend dies, a tribute can often be heard ringing out from the most unexpected of places: the tallest church tower in the Netherlands.

Days after French crooner Charles Aznavour’s death last month, the strains of his 1963 hit “For me, formidable” could be heard from the Domtoren (Dom Tower) in the central student city of Utrecht.

An alert passer-by recorded the unusual ringing of the bells and posted the clip on Twitter. It soon went viral, shared by countless Aznavour fans around the world.

Behind the unique musical send-off was Malgosia Fiebig, who, high up in the centuries-old tower, perched between the bells of an organ-like instrument called a carillon, was doing what she has done for other popular artists on their death.

“When a musician dies, I play a sort of tribute,” Fiebig told AFP, before demonstrating how she knocks out tunes on the carillon’s wooden keyboard, tucked in a room between the bells, some 80 meters (262 feet) above the ground.

“On the radio we also hear more songs of the artist that died. I can react very fast… and am able to play these songs within a few days. I do it often,” Polish-born Fiebig said.

Appointed in 2011 as Utrecht’s 17th city carillonneur since 1623, Fiebig shot to national fame when she played tribute songs to Dick Bruna, the Utrecht-born creator of Miffy the cartoon rabbit, after Bruna died early last year.

The tributes “are a little for me, but also for people walking in the street. I hope that they will hear the music and they will make a connection: ‘Oh yes, yeah that’s that song’,” she said.

“A carillon is of course the number one instrument to play during actual events,” said Christiaan Winter, chairman of the Dutch national carillonneur center in central Alkmaar.

“It’s an instrument that can inform an entire city center through the language of music of something that’s going on,” he told AFP.

Fiebig however is the first to admit that it’s not always easy playing modern pop music on an instrument that dates back to 1664 and consists of 50 bells of various sizes.

Carillons are often hundreds of years old and originally evolved from the lowlands of Belgium, France and the Netherlands, where the first instrument was installed in 1652.

Today, there are more than 600 carillons around the world, including in countries ranging from Brazil to Japan, the United States, New Zealand and South Africa.

The instrument has a number of bronze bells — some weighing as much as two tons — bolted to wooden beams and does not move like normal church bells during a performance.

Instead, a small iron ball called a “clapper” is connected via a steel cable to a wooden keyboard played by the carillonneur, who strikes the keys with a closed fist, a “very physical activity”, said Fiebig.

As the keys are played, the clapper hits the inside of the bell and a sound is produced.

There are also pedal keys for the heavier bells and a carillonneur can “hit” up to six bells at once to create a unique sound.

Not every tune lends itself to be played on a carillon.

“A song like Prince’s ‘Purple Rain’ for instance works well, while another of his songs, ‘Kiss’, absolutely doesn’t. It’s impossible to create funk on a carillon,” Fiebig laughed.

The last seven years have been a labor of love for Fiebig — who also plays the carillon in nearby Nijmegen — to make an ancient instrument more accessible to modern audiences.

Together with two fellow musicians playing keyboards, she has given concerts featuring music as diverse as 1970s pop supergroup ABBA, to songs by British rock legends Pink Floyd and Radiohead.

“I feel playing pop music reaches a big group of people. We want to make them aware… that a carillon is a cool instrument,” she said.

But for Fiebig, who grew up in Poland partly before the fall of communism in 1989, Charles Aznavour will always have a special place in her heart.

“I love French chanson. I don’t speak any French so I don’t understand any of the words,” she said.

“But for years I was listening on the Polish radio to a program playing French songs.”

When Aznavour died in early October aged 94, “it was a quick decision. Within a few days, I chose three songs and I played them on a Friday afternoon.”

“Somebody grabbed a phone and recorded it. And it went viral,” said Fiebig. NVG