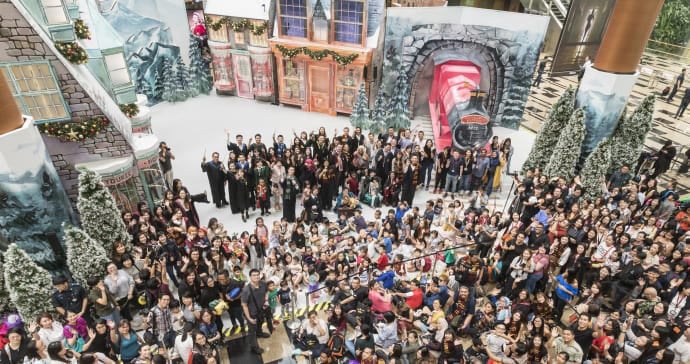 Traveling through Singapore’s Changi Airport with Harry Potter fans? You’ll want to give yourself plenty of time to visit the wizarding world of the bespectacled hero.

Until mid-February 2019, the airport widely recognized as the gold standard around the world will bring a touch of magic to its three terminals with “A Wizarding World Holiday.”

The life-sized setups include interactive activities and themed backdrops like Hogwarts Castle, Hogsmeade Village, Diagon Alley and Newt Scamander’s Menagerie from the film “Fantastic Beasts: The Crimes of Grindelwald” which just opened in theaters.

#ChangiWizardingWorld has arrived! See all the beautiful decorations and experience fun activities inspired by the Harry Potter stories and films as Changi Airport is all decked up for the festive season. Who’s excited?

Fans will also be able to don robes and dress up as a wizard, learn the art of casting a spell, and practice their Quidditch skills. For an added touch of festivities, the airport will turn on the magic and make it snow indoors and put on daily light shows.

Flyers and visitors will also be able to snap Insta-shots beside the Hogwarts Express and life-sized replicas of storefronts for Zonko’s Joke Shop, Madam Puddifoot’s Tea Shop, Owl Post and Honeydukes. JB

Props from ‘Crazy Rich Asians’, ‘A Star is Born’ get their own exhibits at WB Studio Tour