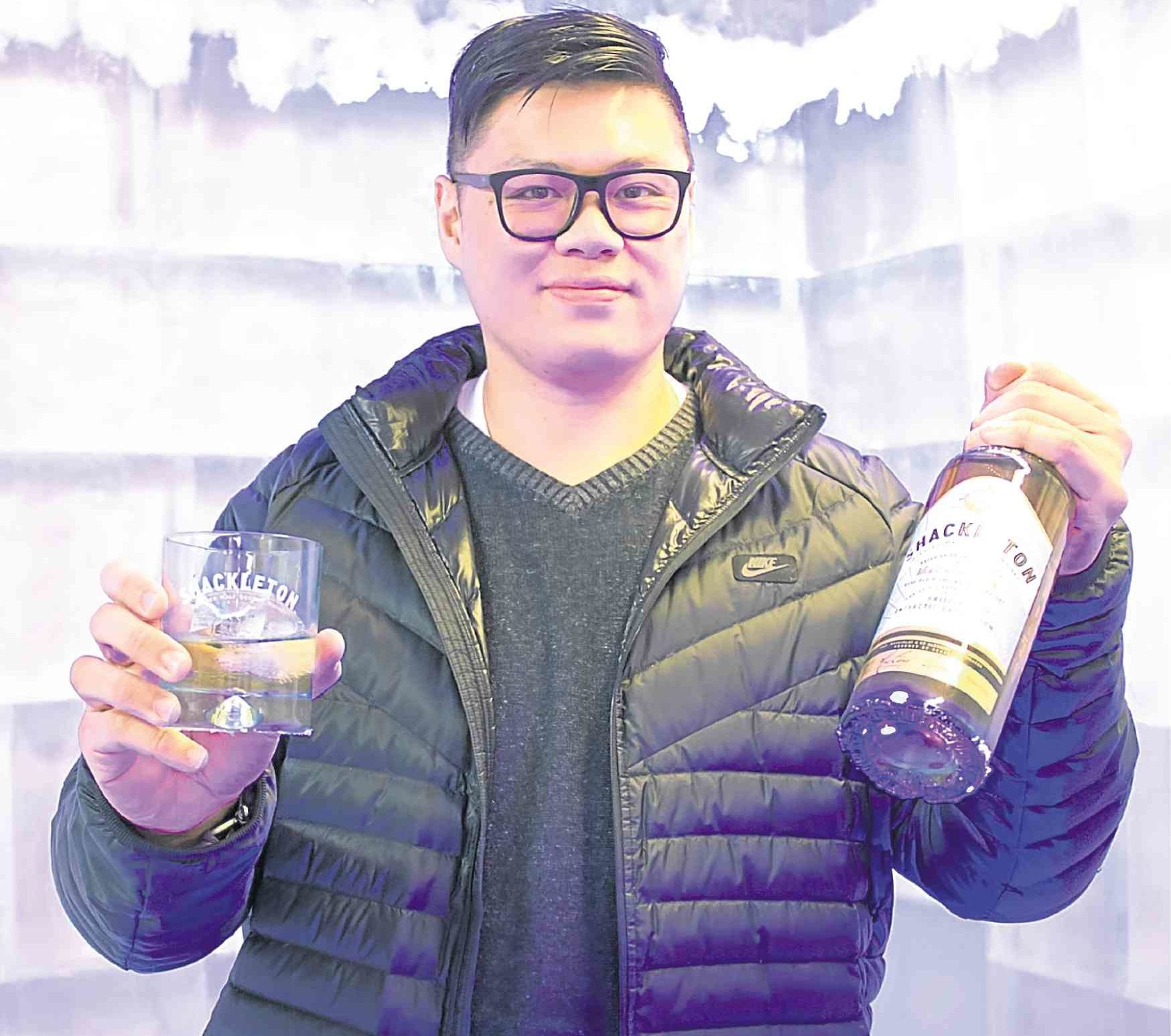 This whisky served over ice—a sacrilege?

Hi, my name is Kendrick and I’m your bartender for today. Who wants to top up?”

It was past lunch and we were in an ice bar—more like a freezing escape room somewhere in the massive kitchen of Manila Marriott Hotel.

Emperador Inc. executive director Kendrick Tan, in a puffy winter jacket, poured us tall servings of Shackleton Whiskey, the new liquor brand he has launched in Manila under his other company, Whyte & Mackay Asia.

“I am a good bartender, I’ll fill your glass. This is what I do on Saturdays,” he said behind the counter made of ice.

Actually, everything around us was carved out of two tons of ice: a small bench, a “throne” shaped like a vintage bottle, a wall display of whisky.

On top of the counter is a large chunk of ice with a bottle of Shackleton frozen inside, symbolizing how the brand was accidentally discovered in 2007.

According to the liquor’s legend, crates of whisky were found by a conservation team that was restoring an abandoned Antarctic hut, said to be used by British explorer Ernest Shackleton and his expedition crew when they attempted to conquer the South Pole in 1907.

The sailors did not make it, but what they lacked in supplies, they had in extra booze: three crates of Mackinlay’s Rare Old Highland Malt Whisky to be exact.

Left frozen in ice for 100 years, the “antique whisky” was turned over to the New Zealand Antarctic Heritage Trust where the liquor was thawed, and later on studied by Richard Paterson, the Scottish  master blender of Whyte & Mackay distillery.

Through an elaborate extraction process, Paterson tasted the “perfectly preserved” liquor and recreated a similar recipe, which is now known as Shackleton Blended Malt Scotch Whisky. It is sold in a rustic blue bottle inspired by voyage on the sea.

Shackleton is a unique whisky blend “discovered under ice, best served over ice”—a sacrilege to whisky enthusiasts who only drink liquor neat, at room temperature.

“There’s an old school way of drinking whisky,” Tan explained, pouring us more drinks to keep us warm in the

-10 degree mini ice bar. “I don’t even like having it with drops of water, but some drinks are just better with ice.”

Shackleton has 40 percent alcohol and can be served on the rocks without compromising flavor, or mixed with lemon juice and sugar syrup as whisky sour, Tan said.

To appreciate the whisky better, Shackleton spokesperson and theater actor George Schulze showed us how to identify notes.

First, smell the whisky without ice: “It has the sweetness of vanilla, toffee, apple, then cinnamon and ginger.”

Schulze went on: “Prepare the palate, swirl it in the mouth for 10 seconds to get the dark sugar, and make the fruity flavors of glazed mango and pineapple pop. Swallow, and notice the bitter aftertaste of dark praline chocolate and hot wine.”

Those were a lot of flavors to process in our initial 15-ml sample, but whisky is a drink meant to be taken slow, marketing officer Jessica Chiuco said, adding that Shackleton is popular among the 25- to 30-year-old crowd who wants a more refined drink with a nice buzz. (It’s also affordable at P1,340 per 700-ml bottle on Boozy.ph.)

Shackleton, indeed, tasted smoother poured over the giant ice cube stamped with a compass by Marriott sous chef Chris Balane. It’s an easy drink with a slow but strong kick.

Ernest Shackleton returned to the United Kingdom and was knighted for valor by King Edward VII. A century later, we thank Sir Shackleton for the full-bodied, 100-percent malt “transition” whisky, which Tan declared as “the perfect middle between Johnnie Walker and a single-malt.”

For our final drink that cold afternoon, Tan led the toast to the whisky with history with Gaelic cheers: “Slàinte mhath!”

—“To you and your good health.”