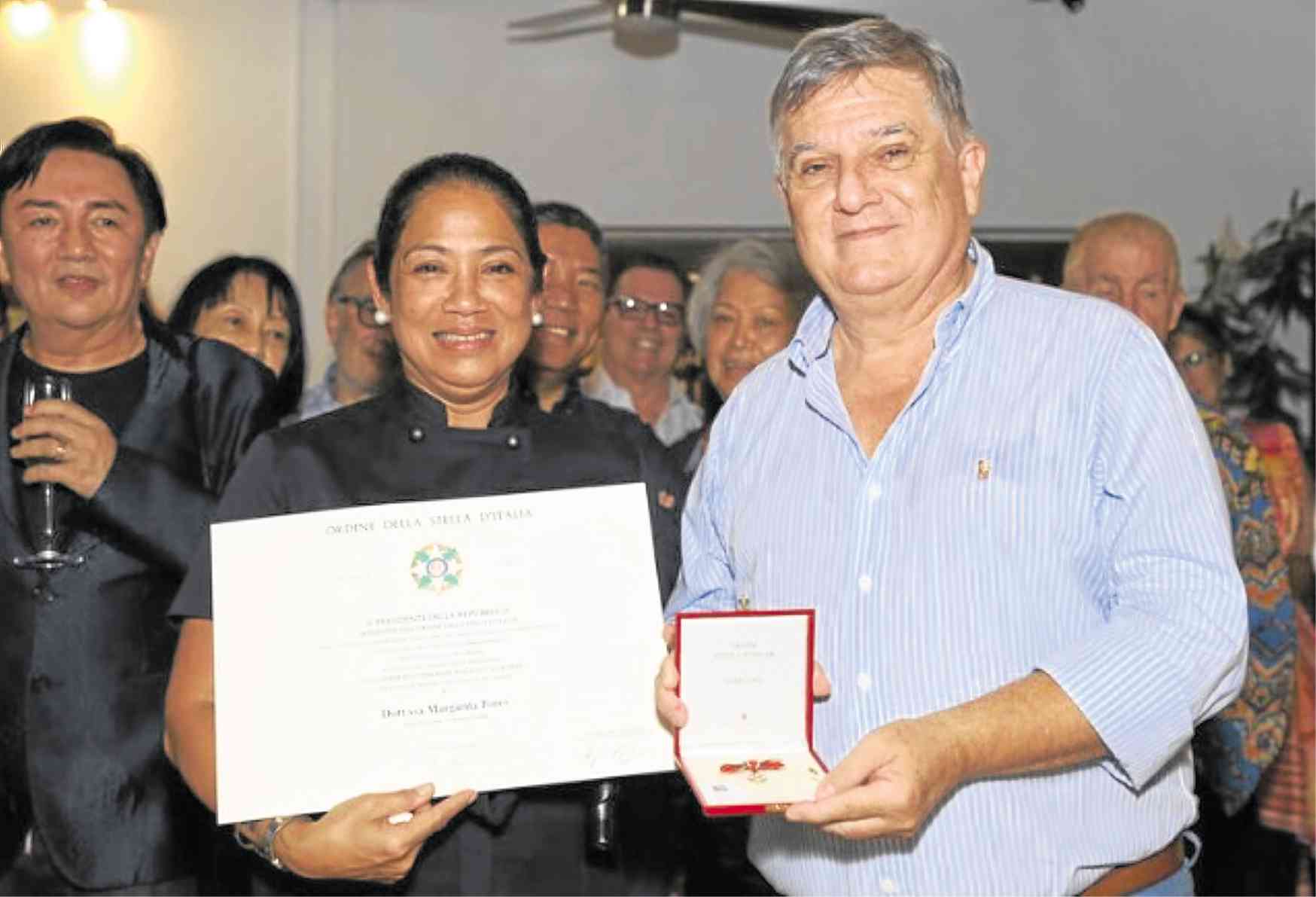 The ceremony, held recently at the residence of Italian Ambassador Giorgio Guglielmino, had a casual vibe. Pizza, pasta, beer, Prosecco and Italian street food were served.

Forés’ family, led by her mother Maria “Baby” Araneta-Forés, and friends, including architect Eduardo Calma and wife Suzanne, retailer Mark Gonzalez and hairdresser-entrepreneur Tinette Puyat, were among the guests.

Visits to Italy during childhood began Forés’ affinity with that country. In the mid-’80s, soaking in its cuisine and culture, she took culinary lessons with Masha Innocenti in Florence.

For the past three decades, Forés has been expressing her deep love for Italy through her constant promotion of its food. Her restaurants and catering service have raised the profile of Italian fare in the Philippines.

“A chef of international fame, Ms Margarita Forés has developed, throughout the years, a personal style that combines the tradition of Italy—a country where she took her first steps in the culinary field—with Filipino elements and local organic products, becoming a reference point for the world of both Filipino and Italian cuisines,” said Guglielmino at the ceremony.

In his speech, the envoy lauded Forés’ entrepreneurial skills. Cibo, her restaurant chain which popularized modern Italian food, has thrived for 21 years in an intensely competitive industry.

She likewise opened other concept restaurants such as Lusso, whose service style was inspired by restaurants in Rome, and Grace Park, which uses native ingredients.

As a culinary ambassador, Forés educated foreigners on Filipino food at major exhibitions, such as the Internationale Grüne Woche in Berlin; Salone del Gusto in Turin; Madrid Fusion; the Artusi food festival in Forlimpopoli; as well as the opening of the artifacts exhibit “Philippines, archipel d’échanges,” at the Musée du quai Branly in Paris.

In the past two years, she has been a resource speaker in the Science and Cooking public lecture series at Harvard University.

In 2017, she presented “Egg Transitions in Philippine Cooking,” focusing on balut (duck embryo).

This year, she delivered a talk on “Liquid Fire: the Science of Philippine Kinilaw.”

Forés is involved in Casa Artusi Philippines, the first offshore school of the prestigious culinary academy and center of Italian gastronomic culture. She organizes classes such as basic pasta making when Italian cuisine expert Carla Brigliadori is in Manila.

Following her selection as Asia’s Best Female Chef 2016, she was featured on CNN’s “Culinary Journeys” for her role in “challenging perceptions and laying the foundation for the future of cuisine.”

The program also noted: “In an attempt to broaden her knowledge of Filipino cuisine, Forés has moved beyond markets to find farmers to unearth long-forgotten ingredients.”

She has likewise been promoting organic farmers and food artisans, whose products are served in her restaurants.

During the Christmas season, she averages four to five catering events a day.

Prioritizing her clients and making sure that all her catering schedules for the day were in order, she arrived late at the knighthood ceremony. Once known as a fashion icon, she came to accept her medal, still dressed in her catering uniform.

Her voice quivered and her eyes were moist with tears as she spoke: “I kept going back to Italy. Maybe I was Italian in my past life. Both Italy and the Philippines are the same. We love food, we love our mothers, we love sharing things around the table. Italy allowed me to fall in love with my country even more.”

She went on to acknowledge Guglielmino, as well as her mother for her unconditional love, her team, her son Amado, whom she called her inspiration, her aunt Judy Araneta-Roxas, who encouraged her to be better in everything, and Casa Artusi.

Forés credited Alexander Lichaytoo, owner of Bacchus International, an importer of the finest Italian ingredients: “Thank you for bringing all the wonderful products from Italy. Otherwise, I couldn’t do this.”

Said Guglielmino: “Her passion and her love for Italian cuisine have made her a real engine for spreading a variety of high-quality Italian products in the Philippines, and generally, in Asia.” —CONTRIBUTED