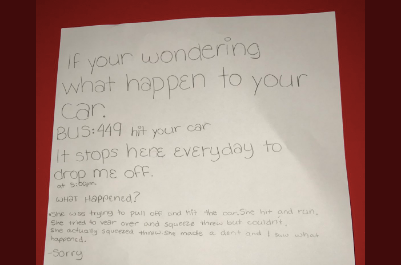 Honesty is indeed the best policy for a sixth-grade student in New York, as she informed someone through a note that his car got hit by the bus.

College student Andrew Sipowicz got a note from an unidentified student telling him of his car’s fate. The girl got in full detail of how the accident happened, and hinted that she studies at Houghton Academy.

“If [you’re] wondering what [happened] to your car, bus 449 hit your car,” her note narrated. “It stops here everyday to drop me off.”

The girl wrote that the bus driver was trying to pull off when it hit the car. “She (the bus driver) made a dent and I saw what happened,” the student said.

She also made an effort to draw what the bus looked like, adding smiling faces as if to depict passengers riding the bus.

“Shoutout to the anonymous 6th grader for saving me a couple thousand (Bus not drawn to scale),” Sipowicz wrote on Twitter Wednesday, Nov. 21. The post garnered around 203,000 retweets and over 929,000 likes, as of writing.

Shoutout to the anonymous 6th grader for saving me a couple thousand (Bus not drawn to scale) pic.twitter.com/7aNK10xSwX

He later posted an update, saying the child was now found but he did not reveal her name. Sipowicz added they are now in the process of finding a way to reward her, and that he is “very grateful for what she did.”

Update: The student who wrote the letter has been found and we’re in the process of finding a way to reward her for her actions. Very grateful for what she did

Sipowicz got an apology from the bus company, and assured him that they will pay for the damages, as reported by the BBC today, Nov. 22.

He further acknowledged the girl in the report, “I just want to thank her so much for being so courageous and doing the right thing when it would have been easier to go home and forget the whole thing.” Katrina Hallare/JB