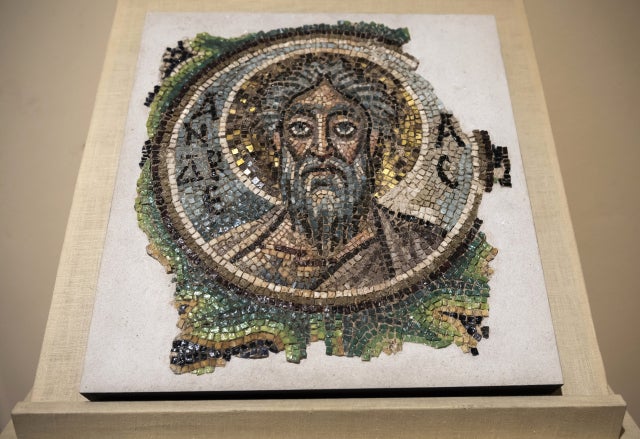 This picture shows a centuries-old mosaic of Saint Andrew, repatriated this year, at the Byzantine Museum in Nicosia on November 21, 2018. Image: Iakovos Hatzistavrou / AFP

A centuries-old mosaic of Saint Mark has gone on display at a Cyprus museum that now plans to reunite it with the 11 other apostles decades after it was looted in the island’s Turkish-held north.

The mosaic dating back more than 1,600 years was returned to the Mediterranean island this week after being tracked down by a Dutchman dubbed the “Indiana Jones of the art world”.

The director of the Byzantine Museum in Nicosia, Ioannis Eliades, was delighted to see it on display Wednesday next to the mosaic of Saint Andrew which was also repatriated this year.

“We’re thrilled about it because it arrived three days ago,” Eliades told AFP.

“It’s the last one of the 12 pieces that we have here in the museum.”

The mosaic was looted from the church of Panayia Kanakaria in northern Cyprus following the Turkish invasion in 1974.

According to the antiquities department, it was “violently detached and stolen from the church, between 1977-79 by the Turkish looter and art dealer Aydin Dikmen” along with other mosaics.

Cyprus has been divided since 1974 when Turkey invaded and seized its northern third in response to an Athens-engineered coup to unite the island with Greece.

Visitors to the museum were excited to see the apostles on show.

“I think it is an exceptional and rare discovery, for this mosaic and others,” said Elpis Skardasi, a retired teacher from Athens.

“It’s the dream of all Cypriots and Greeks to see their heritage return to them,” the 77-year-old told AFP.

Dutch art investigator Arthur Brand tracked down the mosaic in Monaco in the possession of a British family who he said had bought it “in good faith more than four decades ago”.

It was handed over to the antiquities department and the Church of Cyprus during a private ceremony in The Hague last week and was returned to the island on Monday.

“We are thrilled that he managed to find the place that it was hidden,” said Eliades.

“We are thankful also to the family who… gave it back without asking for money or making problems and having any legal action taking years.”

Eliades said the museum plans to restore the two newly returned mosaics and to put them on a reconstructed apse of the Panayia Kanakaria church by May next year.

Eventually, he hopes Cyprus will be reunited and all of the recovered artifacts will be returned to the churches they originally came from in the north of the island.

“The political situation now it’s a bit difficult but we don’t stop to have hope. We believe that something is going to happen,” said Eliades.

“We are not enemies with the Turkish Cypriots. We feel that they also want to be reunited with us. A solution is going to come.” AB