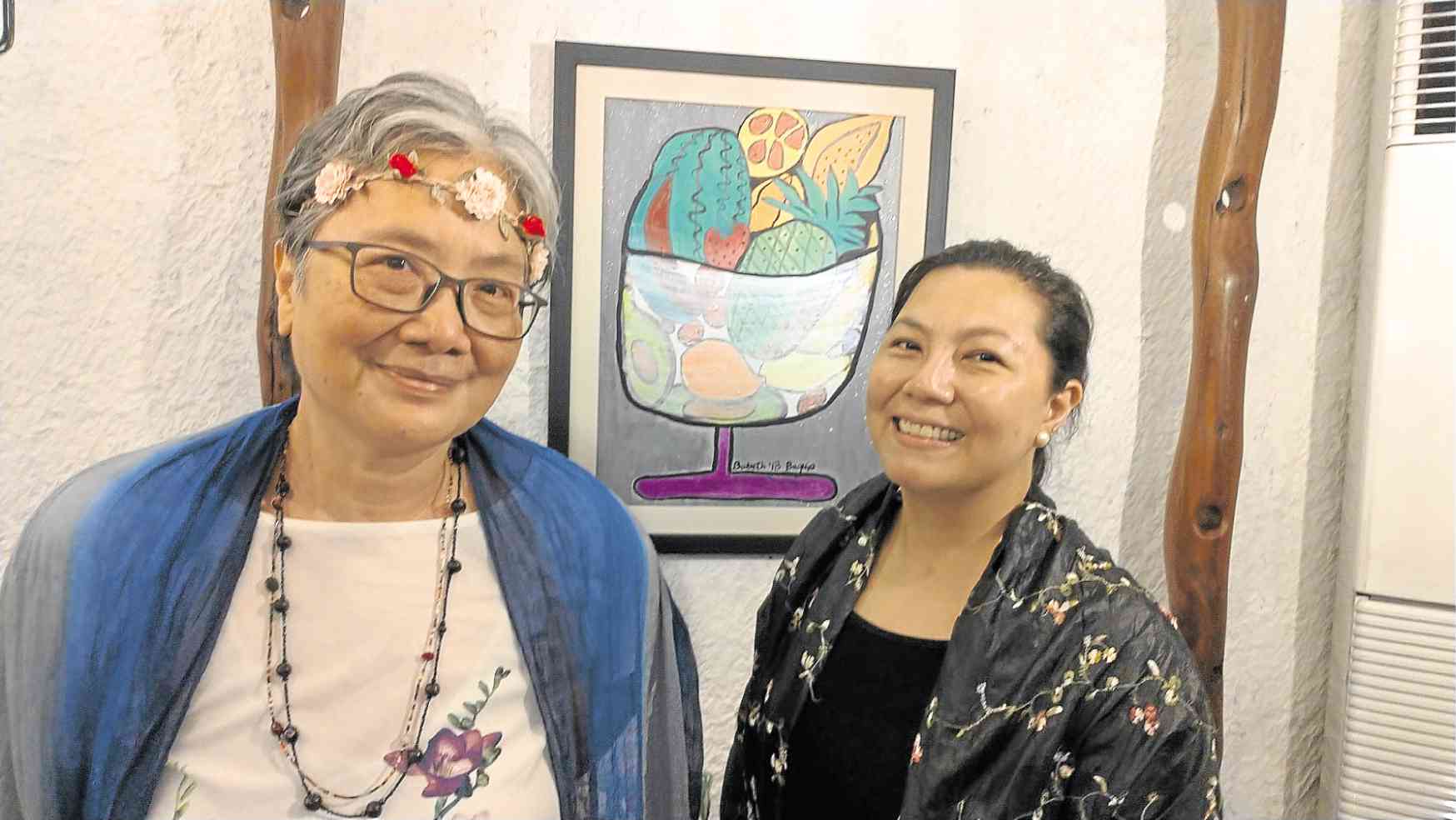 Babeth Lolarga (left) and Sinag de Leon at the opening

The writer and the artist: Babeth inspired by ‘Best Desserts,’ Sinag by snowflakes

Life is short, but art makes it seem longer.

Waxing nostalgic, one well-known painter-about-town compares it to the art scene before the current boom and its concomitant preoccupation with money and status, when it was all about having fun.

A case in point is “Paper and Paint,” the ongoing joint exhibit of writer and painter Babeth Lolarga and paper artist Sinag de Leon at the Gourmet Gypsy Art Café on Roces Avenue, QC.

The opening last Nov. 8, timed with the café’s fourth anniversary, was a typically convivial “Kyusi” gig, graced by writers, artists, musicians and not one but two doyennes of Filipino culture: writers Gilda Cordero Fernando and Virgie Moreno, who at 93, is just as salty as ever.

Lolarga, 63, has known De Leon, 45, from the cradle, being longtime friends with her parents, Felipe “Jun” de Leon Jr. (former chair of the National Council for Culture and the Arts) and writer and feminist Anna Leah Sarabia.

A veteran journalist and longtime writer for Lifestyle, Lolarga says art has provided her avenues for expression beyond the written word.

“I got burned out from journalism in 2004, so I enrolled at the UP College of Fine Arts,” she says. “I eventually got my second bachelor’s degree.”

“When I paint it’s sheer pleasure,” she says. “Gigil na gigil ako sa pintura, sa brushstrokes. Filling up a canvas with figures and colors is like the challenge of filling up a page with words.”

To keep distractions to a minimum, Lolarga works out of a friend’s greenhouse in Baguio, where she’s based. She used to work with a painting tutor, the late Norman Chow, who helped her plan out her paintings with sketches and studies. Now she paints by herself, and the experience has been therapeutic.

“I think it shows in the colors—they’re happy colors,” she says.

De Leon—who works at the UP Film Center—learned to make paper cutouts from a book of crafts when she was seven, a consequence of the family not having a television set.

“Arts and crafts were normal,” she recalls. “Our pastime was reading, and I discovered how to make a paper snowflake from a Childcraft book.”

She was impressed by a notation in the book that said no two snowflakes were alike, and her father suggested she make her own patterns more complex. It has escalated from there.

Her cutouts now resemble nothing so much as mandalas, which to psychologist Carl Jung, were sacred geometries representing paths to higher consciousness.

De Leon says she doesn’t draw or plan the outcome of her cutouts, only the general size and the material to be used (she prefers handmade paper).

“It’s always a surprise when you unfold the paper,” she adds. “That’s what I like about it. There are no repeats—each one is unique.”