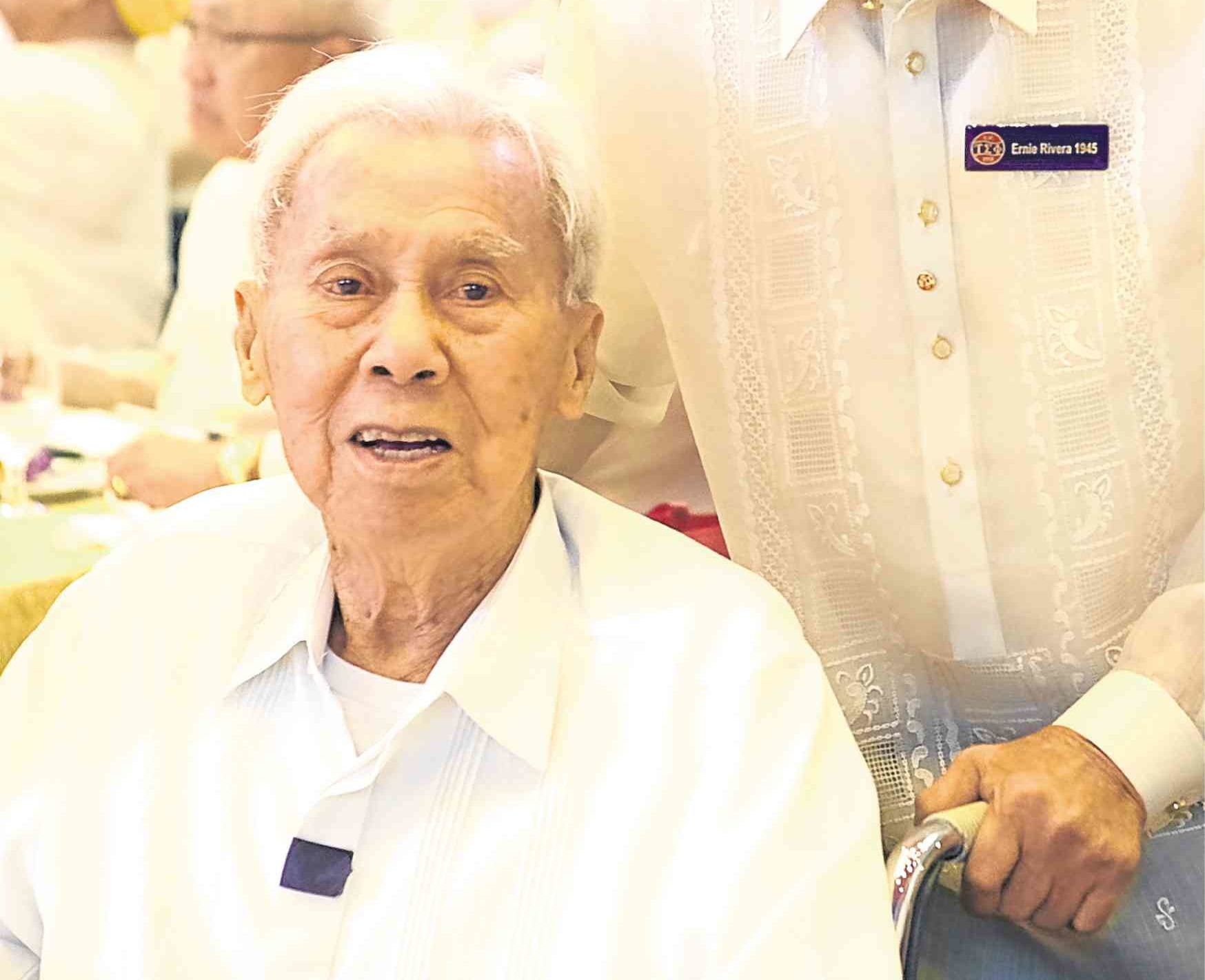 At 104, the oldest living Upsilonian talks about a life fulfilled

At 104, Upsilonian Delfin de Leon Gonzalez, who made a long career as a litigator and trial lawyer, still has a lot to offer, even if only how to entertain a group of us for an interview, delighting on the wonders of his lifetime, or how to age gracefully.

The oldest living Upsilonian is a treasure and a wealth of new perspectives on living and fulfilling our lives. Living in his own home—surrounded by the décor and furniture that he and his wife, the late Auring Carballo, had carefully chosen themselves—with memories of everyone who had shared his life there, he regales us with fascinating historical recollections as only a centenarian can.

In the kingdom of centenarians, this is his castle of visual memories and we are his guests from a different time.

One cannot help but envy his sense of well-being, which has come from many things in his life, like success, failures, adversity, joys, sadness, grief and loss. It was also his parents who had the most influence on his life. The values he learned from them clearly shaped him, and it is from these significant reserves that those like him, who have seen everything in a lifetime, use when various events, disastrous or joyful, come around.

Gonzalez was born on June 15, 1914, in a rooming house on Misericordia (now Tomas Mapua), Manila, where his father, who worked as foreman, was temporarily boarding.

After 13 childbirths, his mother did not need the help of a midwife or a hilot to deliver her 14th child. His father’s presence at the birthing sufficed.

Eventually, Gonzalez was brought to Baliwag, Bulacan, where he was raised by his parents and older brothers.

He grew up experiencing the daily rhythms and ablutions of a simple family living in a small but progressive agricultural trading town.

Growing up in the province had a significant impact on his life. He learned empathy and kindness from familial and community relationships. Living in a town where everyone knew each other gave him an early sense of accountability. This was ingrained in him in those formative years and served him well throughout his career.

After attending Tondo Primary School, Gonzalez was enrolled at the Manila West High School (one of the four high schools in Manila). In 1930, the schools were renamed after four retired Filipino Supreme Court Justices: Florentino Torres, Cayetano Arellano, Manuel Araullo and Victorino Mapa.

After living in Herbosa, a district of Tondo, Manila, the family moved to Sta. Ana where Gonzalez stayed with his older brothers and their families, while his parents went back to Baliwag.

Love in the time of war

Gonzalez met Auring Carballo at the inauguration party of the Young Ladies Club of Santa Ana, held in the Carballo residence on Habana, not far from where he was living in Lamayan.

It was a five-year courtship and engagement. He says: “1938 was a blessed year for me. The Philippinensian came out on the eve of graduation, I had honored my pledge to professor Sinco, that the graduates would have their copies to take home. I passed senior year, making good my promise to Tatang and Inang that the editorship of the yearbook would not be a hindrance to my graduation. I had also made good to Auring the same promise I made to Inang and Tatang that I would graduate. But the blessing that I treasured most was Auring. I had proposed to her in a love letter—à la Robert Browning—the day after the Supreme Court announced the results of the bar examinations.”

For three years Gonzalez worked as assistant attorney and gained some experience in trial practice. He felt he was now in a position to support a wife, though it wasn’t the best time to get married.

Hitler was overrunning Europe except England and Russia. In Asia, Japan had occupied the coastal region of China, encroaching on Southeast Asia, forming the Greater East Asia Co-Prosperity Sphere, a hegemony under Japan’s control. War was inevitable, and it came.

A few days after the bombing of Pearl Harbor, Gonzalez married Auring at Malate Catholic Church amid fireworks coming from the Japanese Imperial Army fighter jets on bombing runs over Corregidor and the Navy shipyard, Sangley Point in Cavite.

Although this was the happiest moment in their young lives, they lived in a climate of constant fear and uncertainty for three long years. Gonzalez relates he kept a baseball bat and an axe in his house in those years.

In late 1942, their first child Dickie was born. “My main concern during the occupation was the safety of Auring and Dickie and for us to survive the war. I decided, therefore, not to join the guerilla movement or engage in intelligence work for the guerillas. Santa Ana was not the place to engage in these dangerous activities. It was a small district and everybody knew each other. The last thing you wanted was for some makapili to know you were involved with the guerillas.

“It was during these perilous times, that Auring and I lived the three most difficult years of our married life.”

In the aftermath of World War II, Gonzalez and Auring adapted to the changes that the tumultuous life events around them had brought.

Despite everything, they remained steadfast in their beliefs, they had survived, but they also had a growing family to raise.

Gonzalez resumed his law practice and with executives from the mining industry, founded the Chamber of Mines of the Philippines in 1974.

He retired as legal counsel for the chamber in 1993.

“I felt, at 79, it was time for me to lead a less hectic life and devote my remaining years to other things, my three loves: Auring, music and books. We traveled, I had time for tending to my orchid collection, play tennis and listen to our wide collection of classical music.”

Now widowed, and having witnessed pivotal events unfold in Philippine history, Gonzalez leads a life that is a mixture of happiness (when he is with his grandchildren and great-grandchildren), and loneliness when he misses his life partner, Auring, whom he was married to for 68 years.

But it is a life with less time wasted on anger and worry. It is a life that embodies a perfect stage for longevity: good genes, old-fashioned values, adherence to life’s Golden Rule, a well-balanced diet and expressing certitude in the beliefs of your faith.

When asked about changes he has seen in his lifetime, he counts the new technology of artificial intelligence (AI) and, most of all, climate change, which he feels is a truth we cannot escape.

“Glaciers are melting, lakes are vanishing, water levels are rising. It is a change that is clearly happening now. I have never known natural global disasters like the ones we read about today. I am not a user of social media. I still use an old-fashioned pen and write letters, I have a mobile phone but my help does all the calling for me. I read the papers every morning at breakfast and one of my sons brings relevant periodicals for me to read. I love reading and stay up late doing so.”

Gonzalez witnessed the atrocities and casualties of wars, and survived. He held his growing family together during lean times on limited incomes. He watched the changing of technology, from horse-drawn calesas and carriage-type buggies on dirt roads to hybrid electric cars on expressways.

He transitioned through the many changing of the guard with presidents and administrations.

His fraternity, Upsilon Sigma Phi,  the oldest Greek-letter fraternity in Asia founded at the University of the Philippines in 1918, is celebrating its centennial.

Since he is the oldest living Upsilonian (Batch 1937)—Ferdinand Marcos was his batchmate—it was a fitting gesture and a moral imperative to be acted upon by succeeding generations of Upsilonians to honor him during the Fellowship of the Lights on Nov. 18 at the Philippine International Convention Center. More than a thousand students and alumni members from all over the world gathered.

Another highlight of the celebration will be the inauguration of the Upsilon Sigma Phi’s flagship project: the UP Promenade in the Diliman campus, an outdoor learning center for the UP community entirely funded by donations worth P20 million from Upsilonians and their families. —CONTRIBUTED