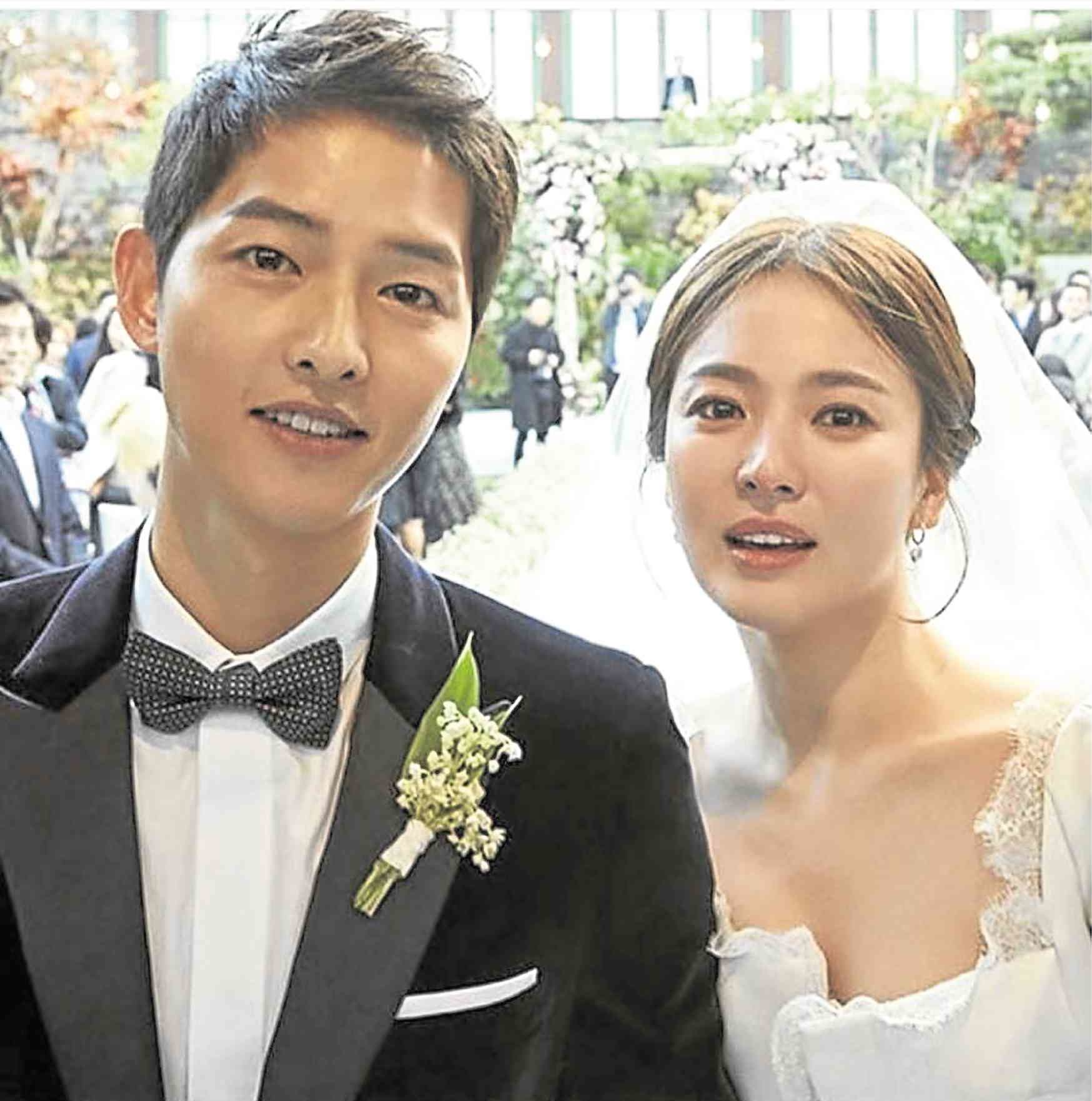 Song-Song couple—Song Joong-ki and Song Hye-kyo—stars of “Descendants of the Sun,” get married in real life.

I cannot think of any other country aside from South Korea that recognizes the importance and influence of culture to attain, well, world domination.

When I was taking my masters in national security administration, it fascinated me how a country’s social and cultural identity, or lack of it, can actually translate into a strong or weak nation.

I read that it was a deliberate effort of the Korean government to develop the nation’s media culture for its own citizens to appreciate and embrace.

To cut a long story short, Korea did not only convert its citizens. It also hit it big among its Asian neighbors in the late ’90s, and the wave of popularity of Korean culture—from entertainment to skincare and food—ultimately reached the United States, Europe and the Middle East.

“Hallyu,” or the Korean wave, proved it isn’t a novelty. It became Korea’s soft power approach to influence the world.

I’d love for the Philippines to make a splash in the global entertainment industry, but I think, confused as we are as a people, branding ourselves internationally remains a challenge. At most, we’re recognized as the happiest people on earth and the world’s best singers.

I’m a happy person but I can’t sing. I’m a Filipino but lately, I love everything Korean. This was after I got addicted to Korean dramas.

I’m a late bloomer considering Hallyu has had millions around the world under its spell for the last two decades.

Despite the heavy theme, it’s patently nakakakilig, especially since Joong-ki and Hye-kyo—known as the Song-Song couple—got married in real life.

I hadn’t caught up with my sleep yet when I started “Pretty Noona Who Buys Me Food” (in Korean, noona means a boy’s older sister, or ate). Also known as “Something in the Rain,” this drama pushed the envelope in its May-December romance and the #MeToo movement theme.

It’s heart-tugging to watch Seo Joon-hee (Jung Hae-in) make a herculean effort to defend and protect his love for Yoon Jin-a (Son Ye-jin), who’s several years older than he and who happens to be his older sister’s best friend.

Still without enough sleep, I watched “Healer.” My right eye was already twitching but I watched one episode after another. Good thing I was on a long vacation, I could take legitimate naps, unlike the President.

“Healer” is about this “night messenger,” a vigilante who’ll do everything, except kill, for money. Seo Jeung-hu (Ji Chang-wook), codenamed Healer, gets a job that gets him involved with gung-ho journalist Chae Yeong-si (Park Min-young). It’s not your usual bodyguard love story in the sense that the whole drama weaves in politics, corruption, a back story on Korea’s authoritarian era, a pliant media and how they all ultimately ruined families and friendships.

It has comedy which balances off the heavy issues hanging over the protagonists who, of course, fall deeply in love with each other.

I’ve seen around 10 dramas since that July night. In November, however, I began a self-imposed moratorium until I finished all my writing projects.

Anyone who wants to start watching K-dramas must have the time, stamina and discipline, because once you start, there’s no turning back.

Korean dramas aren’t perfect. They have episodes that could drag, and unrealistic scenes and gaps in the storyline.

But overall, K-dramas are polished and sophisticated. Whether the themes are heavy issues or mundane concerns, they are almost always well-thought out and tightly written, superbly directed and acted—as in no melodramatic, over-the-top crying or yelling. Hindi OA (overacting).

The romantic dramas have the right amount of kilig to make the feeling linger. Most are fast-paced. They know exactly when to cut every episode to leave the audience hanging—driving one to marathon viewing. One time, my mother slept at 7 a.m., because she couldn’t stop watching “It’s Okay, That’s Love,” a romance on mental health issues.

They say that Korean dramas present both the familiar and the exotic. The familiarity makes the shows relatable; the exotic is the hook that keeps the audience interested.

“My Love from Another Star,” one of Korea’s most popular dramas of all time, teaches us to savor every moment with our loved one. Its literal title is “You Who Came from the Stars,” which sounds a lot dreamier.

This is my second favorite drama, thanks to the comedic chops of lead actress and top Hallyu star, Jun Ji-hyun, who plays Cheon Song-yi.

One night, heartbroken over what she thought was an unrequited love for Do Min-joon (Kim Soo-hyun), Cheon Song-yi, drowns herself in soju and lets go of all her emotions, the way all of us want to when we get our hearts broken.

What happens next is the funniest monologue I’ve ever seen, which includes her slowly sliding off a wing chair while pining for the one she loves. Words can’t do justice to Ji-hyun’s perfect acting. You must watch it. Oh, by the way, Do Min-joon is an alien in this drama. A hot alien, I must say.

It’s become my habit before shuteye to watch scenes from “Healer” or other dramas like “Oh My Venus.” It’s all part of the journey, a friend assured me, when I confessed I’ve been spending so much time on YouTube watching anything I could find about Hallyu, the Korean stars I like, the music videos of their dramas’ OSTs, concerts, or interviews of Korean actors, or read old and current news about them.

I’m  following Ji’s Instagram account, as well as those of Park, the Song-Song couple, Son Ye-jin, Jung Hae-in, Jin Goo, Ha Ji-won, and even the unofficial accounts of Jun Ji-hyun and So Ji-sub.

The Korean stars’ IG accounts are the great equalizer between ordinary me and Anne Curtis, who has 10.1 million IG followers. I see her following Hallyu celebrities, too.

Now back in Manila, I listen to the dramas’ original soundtracks while stuck in traffic. This is not an exaggeration, but I think I have been listening to too much Korean that there are times when Filipino already sounds Korean to me.

My weekends are now dedicated to my Korean language lessons. My youngest classmate is a 9-year-old girl. Hopefully, I’ll know enough Korean by next year so that I could interview Ji in Korean after he is discharged from the Army in April.

In July 2013, my late editor in chief, Letty Jimenez-Magsanoc, sent me to Korea to cover the 60th anniversary of the armistice between the North and South. I had no idea what Myeongdong was that time, but I was very excited to see Panmunjom, the UN command buildings at the Demilitarized Zone (DMZ), and have a glimpse of North Korea’s Panmungak Hall.

I knew it was the closest I could get to North Korea. Ever.

Maybe it’s little known fact to the younger generation, but Filipinos fought side-by-side with South Koreans in the Korean War in the 1950s. We have a treasure trove of stories of valor, and our strong security alliance is rooted in that bravery to stave off an invasion.

With the Korean dramas, the two countries are developing stronger people-to-people ties. I’m sure I’m not the only Filipino who thinks of the oppas (literally, a girl’s older brother in Korean, or kuya, but is now a reference to Korean actors) whenever we read about security issues in the Korean Peninsula.

There are about 10 Hallyu stars in the Army now, serving Korea’s two-year mandatory military enlistment for all able-bodied men. Every enlistment of a Korean star is a heartbreak and every discharge, an occasion for fans to celebrate worldwide.

My friend, Trina, and I will be in Busan next month where we’ll brave Korea’s notorious winter for a musical, “Shinheung Military Academy.”

Our friends remind us that there won’t be any subtitles there. That’s a challenge, but who cares? It’s all part of our Hallyu adventure!