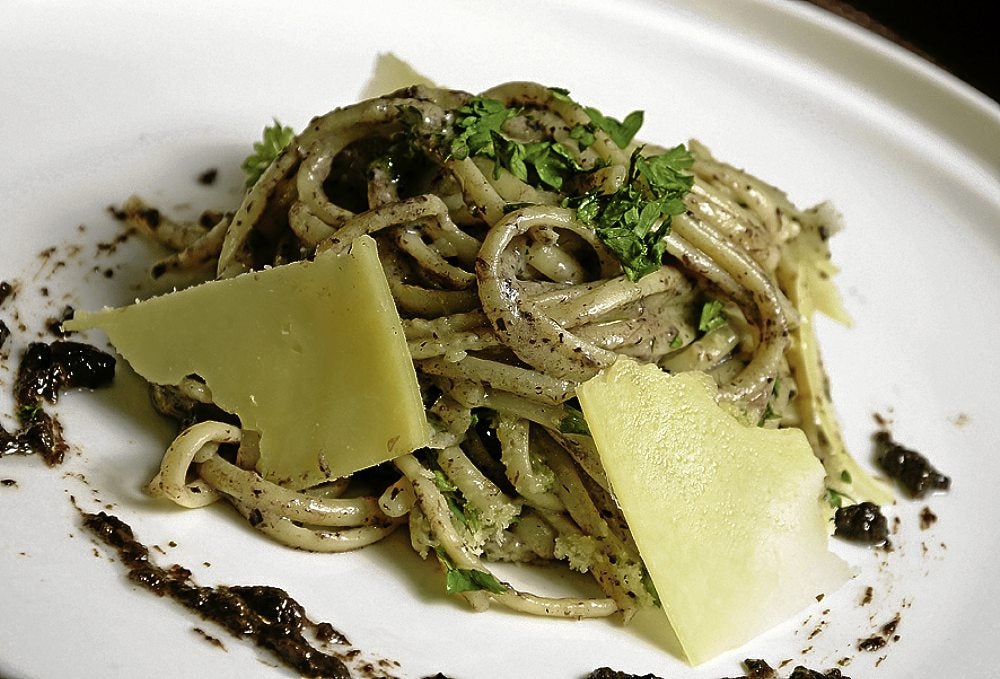 No-fuss but bursting-with-flavor Truffle Pasta for his mate

Chef Ronnie Reyes doesn’t want to be caught off-guard by guests paying him unannounced visits to his sleek condo in Salcedo Village, Makati.

So, he makes sure his cupboard is filled with foodstuff he can easily whip up any given time. Essentials include dry pasta, canned tomatoes, olive oil, truffle oil and other canned food.

“I buy impressive stuff like black sausages and cassoulets,” says 41-year-old Reyes. Cassoulet is a classic French bean stew in a can with sausages, pork or duck.

“I store delicious fare just in case somebody arrives I can open something that will still excite the taste buds,” adds Reyes. “Even if it comes straight from the can, with just a little reheating. I pair it with crostinis.”

For his partner, he tosses very light pasta, since both of them are light eaters and hardly eat at home due to their busy schedules. Reyes is the executive chef and assistant general manager for Bizu Patisserie, while his partner is a lawyer.

The Truffle Pasta is significantly light on the tummy but bursting with flavors with the infusion of truffle cream and Parmesan shavings. The elegant truffle flavor stays in the mouth after a delicious al dente bite. Classy and creamy.

He then serves the pasta with vegetable salad, which his partner loves so much.

The table is set with round silver place mats, white plates and blue napkins, adorned with scented candles.

“When I am in the mood to cook, I’d go to the grocery to get food. But, most of the time, I’d just like to go home to relax and drink a nice red wine to remove the stress from work. No more cooking.”

Reyes finished Hotel and Restaurant Administration from the University of the Philippines. He worked at Jardine Wines and Spirits as account manager handling sales for five-star hotels and restaurants for five years. Later, he joined Shangri-La Makati as a front desk officer for a year.

During his stint at the hotel, he became friends with the chefs and cooks, and eventually got so interested with the kind of work they do in the kitchen.

He decided to quit his job and promptly enrolled in a two-year program at the Center for Culinary Arts-Manila.

“I realized that I’m a back-of the-house type of person,” says Reyes. “I’d rather just be working in the kitchen than talking to people. But, I’m aware that in order to get into a culinary job you need to have at least education in it. So I took up a culinary course.”

He apprenticed and worked at the Mandarin Oriental Hotel’s Tivoli Grill for one year before joining Philippine Pastries Inc. in 2002 as executive chef, and eventually as assistant general manager to Bizu’s  Anabel Lichaytoo Tanco.

“Annie was a classmate at CCA,” recounts Reyes. “One day I got a call from her to join and start Bizu. I immediately said yes and never left since day one.”

Reyes is responsible for the creation of Bizu Private Caterer’s wide range of menu. He’s been with Bizu for 10 years.

“I have started a friendship with Annie. We would go on a culinary adventure abroad together. I’m happy the way she treats me as an employer. She values my decision and she understands it,” says Reyes.

Cooking as a passion

Reyes started tinkering around the kitchen at a young age. He would watch his parents cook kare-kare, sinigang, adobo, etc.

The first food he cooked was pancit canton when he was in grade school. Everyone in the family loved it.

Now, he cooks for the family in Sta. Maria, Bulacan, during special occasions like birthdays or Christmas.

When not busy, he just stays at home. He goes to gym at Fitness First everyday.

So far, the most important lesson he’s learned in his job is to plan ahead.

“If you’re doing a big event, it’s a must that you plan way, way ahead,” says Reyes. “If you’re heading the team, the focus has to be there all the time no matter how exhausted you are because you’re being relied on  to think by everybody. Concentrate and give direction to your people clearly.  You delegate to simplify things.”

Reyes recently learned this after he catered to more than 2,000 people during the Ad Congress in Camarines Sur. Reyes and his team were cooking till the wee hours, prepping lunch and dinner for the thousands of guests. He only had 10 staff, but they were able to feed so many people.

“Despite the sleepless nights, we were able to achieve what we focused on,” says Reyes.

Cook pasta according to package instruction. Set aside.