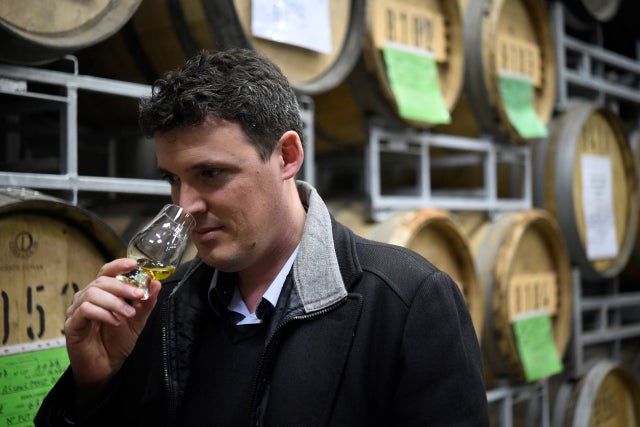 French CEO of the Warenghem distillery, David Roussier proceeds to an olfactive test on November 13, 2018 in Lannion, western France. France currently has 33 fully operational whiskey distilleries, according to the Federation of French whiskey. But their number should quickly double: thirty have begun to distill. They still have to wait until the alcohol has aged for three years in barrels to claim the name of whiskey and to start the marketing. The Warenghem distillery was the first to embark on the adventure of Breton whiskey, the first whisky 'made in France.' Image: AFP/Fred Tanneau

In recent years, Japan stunned traditional whisky-makers Scotland, Ireland, and America by exploding onto the international market and winning over connoisseurs of the tipple long considered an exclusive dominion.

Now, entrepreneurs in France — a country better known for its mastery of wine and cognac — seem to have taken heart from Japan’s success, with dozens throwing themselves into the once exclusive world of whisky.

The country today has 33 fully-operational whisky distilleries with another 30-odd soon to come on line — as soon as their unique Gallic-styled spirits have matured in barrels for the required minimum three years — according to the French Whisky Federation.

No country on Earth drinks more whisky than France per capita — some 2.15 liters per person in 2014, according to research agency Euromonitor. The closest competitor was Uruguay at 1.77 liters per person, with the United States in third place at 1.41 liters.

The first whisky was distilled on French soil in 1987, by Warenghem in Brittany in northwest France, across from whiskey giant Ireland.

“There is good whisky in France,” Jim Murray, author of the best-selling “Whisky Bible”, told AFP.

Today, the country holds two European licenses for whiskies produced under a “protected geographical indication” — meaning they come from a clearly delineated geographical area and are made using a distinct recipe and method.

Besides the two newcomers — Alsatian whisky from the Alsace region and Breton whisky from Brittany — there are only two other PGIs for whisky in Europe — for Scotland’s Scotch and Ireland’s whiskey, which has its own spelling.

“France can make very good whiskies because it has all the required raw materials — barley, malt, and pure water — as well as well-honed skills in distillation and ageing,” said Christophe Fargier, founder of the Lyon-based brewery Ninkasi which has just launched its very own whisky.

Three of the world’s five biggest producers of malt — a special mix of germinated grains used to make the spirit — are in France, added Xavier Brevet, who co-founded the blog “Le Whisky Francais” (French Whisky).

According to Warenghem boss David Roussier, French whiskies offer something no others can.

“What people look for in a whisky is a degree of authenticity,” he told AFP.

“They want that we speak to them of terroir” — the French word used to describe the natural environment in which a wine is produced — including the soil, climate, and topography.

“In Brittany, we are well equipped for that… Now that people have accepted that we can make whisky in Brittany, we can allow ourselves to be more original.”

Another, unexpected, advantage lies in France’s many used wine barrels.

While many Scotch whiskies are matured in barrels previously used for bourbon or sherry, French producers have taken to exploiting the rich aromatic palette of casks that once aged wine.

The increase in demand sent prices soaring: a barrel used to cost about $30, now they go for about $300, said Philippe Juge, director of the French Whisky Federation and author of the French version of “Whisky for Dummies”.

Many newcomers to the whisky world include former distillers of fruit-based spirits, and breweries that have switched to producing beer not for drinking but as a base for whisky, the experts say.

Despite marked growth, the field remains limited for now.

Warenghem sells about 200,000 liters (53,000 gallons) of pure-alcohol equivalent — a measure of quantity used in the spirits industry — per year.

“There are no more than four or five distilleries in France today capable of large-scale production,” added Brevet.

“The profit margin requirements of the global spirits giants are too high for newcomer producers to meet at this stage of the (French) industry’s development,” he said.

Murray says he has observed an explosion of micro-distilleries in France as elsewhere in the world.

“But producing sufficient quantities, and with consistent quality, is a major problem. We need to invest in them and believe a bit more in their future,” he said. CC