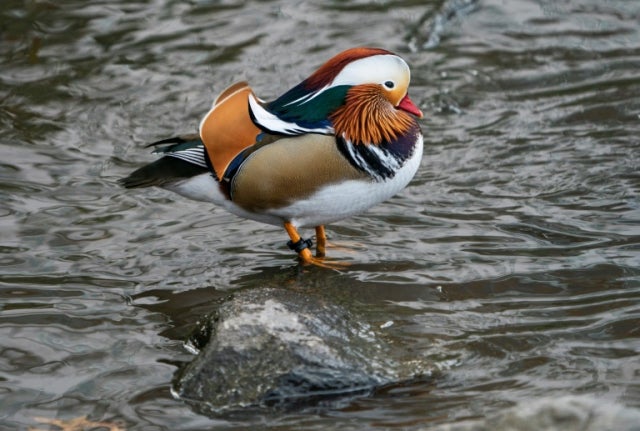 A magnificent Mandarin duck has become a star attraction at Central Park, traveling from unknown lands to mingle with the most banal of mallards, attracting crowds and the paparazzi along the way.

The duck, whose species is native to East Asia and sees males sport a colorful plumage in purple, orange, yellow and rust tones, landed at the iconic New York park on a sunny October day. He was spotted by rare birdwatcher David Barrett, who posted a video on Twitter via the handle @BirdCentralPark that went viral.

The tos and fros of this stunning member of the Anatidae family are tracked closely on Twitter, and he even got his moment of fame in The New York Times.

It’s unclear exactly how he arrived here. Some speculated at first that he had escaped from a zoo, but none of the city’s reported a missing duck. Others guessed he might have been abandoned by a family that kept him as a pet.

Yet more suggested he came from lands beyond the U.S. financial capital, where laws bar people from owning a duck.

All the speculation has only helped fuel the duck’s popularity. Mystery abounds when he surreptitiously takes flight for missions that can sometimes last two weeks.

He was spotted several times in New Jersey, on the other side of the East River, with a telling band on his right leg, but it’s unclear whether he swam or flew to the other side.

The duck has become a star, nicknamed Mandarin Patinkin by local media as a tribute to actor Mandy Patinkin of “Princess Bride” fame.

On Tuesday, he roamed about beyond the lenses of photographers on the lake in a southeastern corner of Central Park a stone’s throw from the Plaza hotel, snacking on a few breadcrumbs thrown by onlookers. NVG

Two iconic birds brought back from the brink of extinction