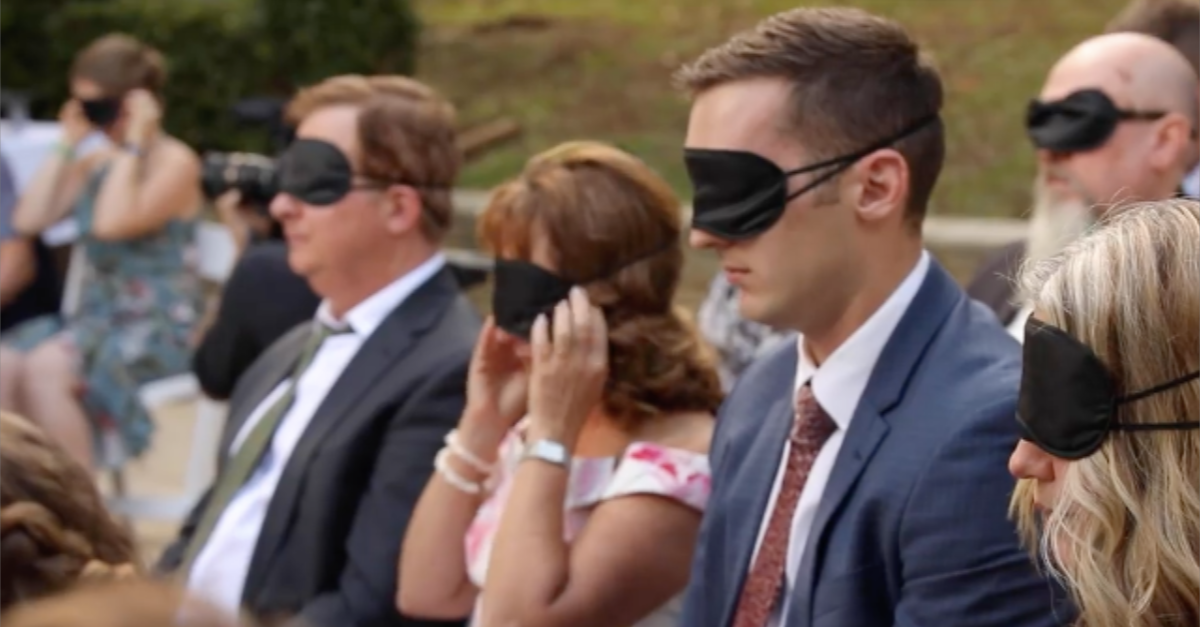 In solidarity with the bride who lost her sight before she met the groom, guests at a wedding in Australia literally put themselves in her shoes by wearing blindfolds during the ceremony.

Steph and Rob tied the knot in a ceremony held at Queensland on Sunday, Nov. 25. A video of the nuptials posted by Lemon Tree Film House via Facebook on Tuesday, Nov. 27, has gone viral, garnering over 12,000 views, as of this writing.

“When we lose one of our senses the others become heightened which allow us to experience something as beautiful as these vows in a totally unique way. Today we get to experience that in Steph’s way.”

“When we lose one of our senses the others become heightened which allow us to experience something as beautiful as these vows in a totally unique way. Today we get to experience that in Steph’s way.”During Steph & Rob's vows to each other, the guests were invited to wear a blindfold so that that everyone could experience what Steph experiences each and every day. Steph has something called Cone Rod Dystrophy which is an inherited eye disorder that completely took away her eyesight shortly before she met Rob.We have something quite special planned for Steph & Rob, but in the meantime we're going to try to explain the contents of this short clip for Steph, her mum, her brother and any vision impaired friend who will be unable to watch this film but with the help of technology can have this text read.———————————————————————-The film starts with a shot of Steph standing out of sight from Rob just before she begins her walk down the aisle, looking up teary-eyed, her breath catches during the flood of emotion she is feeling. It cuts quickly to a shot of her mum’s hand having her first touch of Steph's dress, running her hands over the beading and then a shot of Steph's hands feeling her mother's dress in return. There are lots of quick flashes of Steph and Rob laughing as they walk surrounded by fields. You can hear someone saying "are you ready?" but the shot shows Steph still struggling to keep her composure. Rob says "take one step forward" whilst the footage shows Steph's feet stepping out from a field, her hesitance of not knowing quite where to step is there but you can hear Rob’s reassuring voice. It cuts to some soft, dreamy, almost out of focus footage of Rob leaning in for a kiss, but then the footage glitches out into Steph and Rob laughing, mainly focused on his big gorgeous smile. It cuts to a view of a field of brown cows with rolling hills to the back and Steph and Rob out of focus in the foreground. When Steph says "and the silence", there is a shot of Steph leaning into Rob, both of their eyes are closed, everything is perfect at this stage, the background is out of focus but the sun is spilling softly on the rolling hills behind. Jarrad starts to talk about losing one of your senses, it cuts to the wedding guests putting on their blindfolds. A quick timelapse of the Glasshouse Mountains shows fluffy clouds and a dramatic sky flying over, fast then slow, then fast again. More of the crowd putting on their blindfolds. Rob guides Steph across a ditch in the field, and then a close shot of her hand wrapped around his arms as they're walking. The camera flies across a field towards the Glasshouse Mountains, this is the view that Steph remembers as a child and the reason she chose to get married at a spot she can visualise.It cuts back to a few different shots of guests listening to Steph and Rob's vows with blindfolds on. Steph's mum is shown as the only other person without a blindfold on. Her eyes are closed as she takes in every word you speak to one another and everything thats going on around her. You can see two guests smile and giggle at one point. Steph steps out towards the corner of the aisle. We see Rob about to lose his s h i t. He’s rubbing his hands uncontrollably, holding them close to his mouth struggling to keep it together. Steph faces him, Steph's dad is looking at Rob down the aisle, Steph's smiling, she look beautiful and we just pause on this moment for a second. The music kicks in, it cuts to Rob leading Steph down a dirt road, and unbelivably beautiful sunset behind them. It flicks to Steph walking down the aisle, whether or not Steph knew it, she was looking directly at Rob. We can see Steph's mum holding Steph's brother's hand. It then cuts to looking from behind, over Steph's shoulder where we can see Rob rubbing his hands, about to cry but trying to keep himself composed. Looking between Steph and Rob we can see her mum, very emotional but still smiling. Then it turns back to soft dreamy focus with Rob's hand on Steph's back, grassy fields in the background, Rob kissing her forehead, their hands holding one another. You can see the beautiful beads on Steph's dress. The next shot shows the magical rainbow that appeared whilst they both cuddle. Closeup footsteps on the dirt road. The ring-bearing owl lands on Steph's hand gracefully. Steph's veil which is the same one that her mum wore on her wedding day is flying across the screen with Rob's arm around Steph's waist. The final shot shows Steph walking back down the aisle, her loved ones are clapping, she is smiling, and high-fiving her guests as she goes so that she can physically feel their presence.To see the photos by James Day Photography – click here – https://www.facebook.com/jamesdayweddings/photos/a.225579890790264/2407216229293275/?type=3&theater

Steph, who has Cone-rod dystrophy, an inherited disorder which took her eyesight away, can be seen struggling to keep her composure before the wedding. With the aid of Rob, she was able to fight off the wedding jitters that threatened to consume her.

The excitement of the groom was evident while Steph was walking down the aisle. Rob kept on rubbing his hands uncontrollably, unable to stand still while waiting for his bride. When she reached, the altar, their happiness at the prospect of a future together was evident with the big smiles they wore on their faces.

When it was time for them to say their vows, the guests donned on blindfolds to allow them to have a glimpse of what Steph experiences on a daily basis.

“When we lose one of our senses the others become heightened which allow us to experience something as beautiful as these vows in a totally unique way,” the celebrant said. “Today we get to experience that in Steph’s way.”

The couple also strayed from tradition with their chosen ring bearer — their ring was delivered by an owl with snowy white feathers.

The final shot of the video showed the now-married couple leaving the altar, with Steph high-fiving the guests.

Meanwhile, their wedding photographer, James Day, posted a memorable photo of the ceremony on the same day.

“When we lose one of our senses the others become heightened. This allows us to experience something as beautiful as…

Rob’s weather-worn hands can be seen holding Steph’s delicate ones. In the background of the photo, one can see the guests wearing the blindfolds, except one: Steph’s mother who also lost her vision to the disease. JB