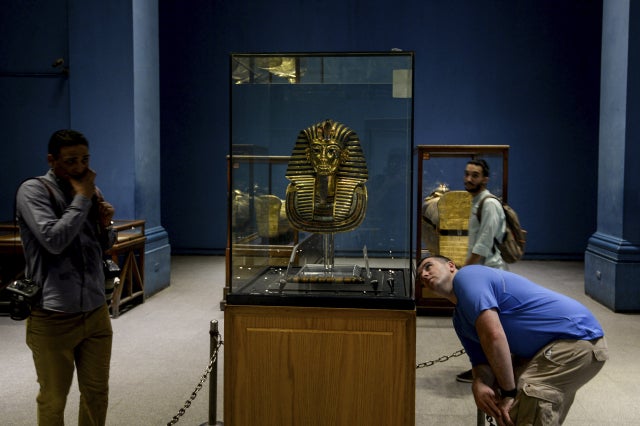 Four decades after the boy pharaoh caused a sensation in the US and Europe, treasures from the tomb of Tutankhamun are to tour the world again — many for the first time.

More than 50 of the 150 artworks from his tomb in the show will only ever leave Cairo once, say the Egyptian authorities, who are organizing the tour in the run-up to the 2020 opening of the Grand Egyptian Museum in Giza.

“Treasures of the Golden Pharoah” — which opened in Los Angeles in March — will go on show in Paris next March at the giant la Villette arts complex. It is the show’s only stop in continental Europe.

The organizers have yet to unveil the other nine cities on the world tour.

Previous exhibitions about the boy pharaoh have been record-breaking blockbusters, setting off “Tut-mania” around the globe.

More than eight million people attended a 1973 show, “The Treasures of Tutankhamun”, at the Metropolitan Museum of Art in New York.

Another 1.2 million people queued to see a smaller exhibition six years earlier at the Petit Palais in Paris in what was called “the show of the century”.

Dr Mostafa Waziry of the Egyptian Ministry of Antiquities said the tour was also to “celebrate the 100th anniversary of the discovery of the tomb of the boy king”.

“The discovery of Tutankhamun’s unplundered tomb revived our fascination with Egypt and its buried treasure,” said Vincent Rondot, head of the Egypt department at the Louvre museum. The Louvre is lending one of its masterpieces, a statue of the god Amun protecting Tutankhamun, to the show.

The Los Angeles show at the California Science Center closes in January. AB