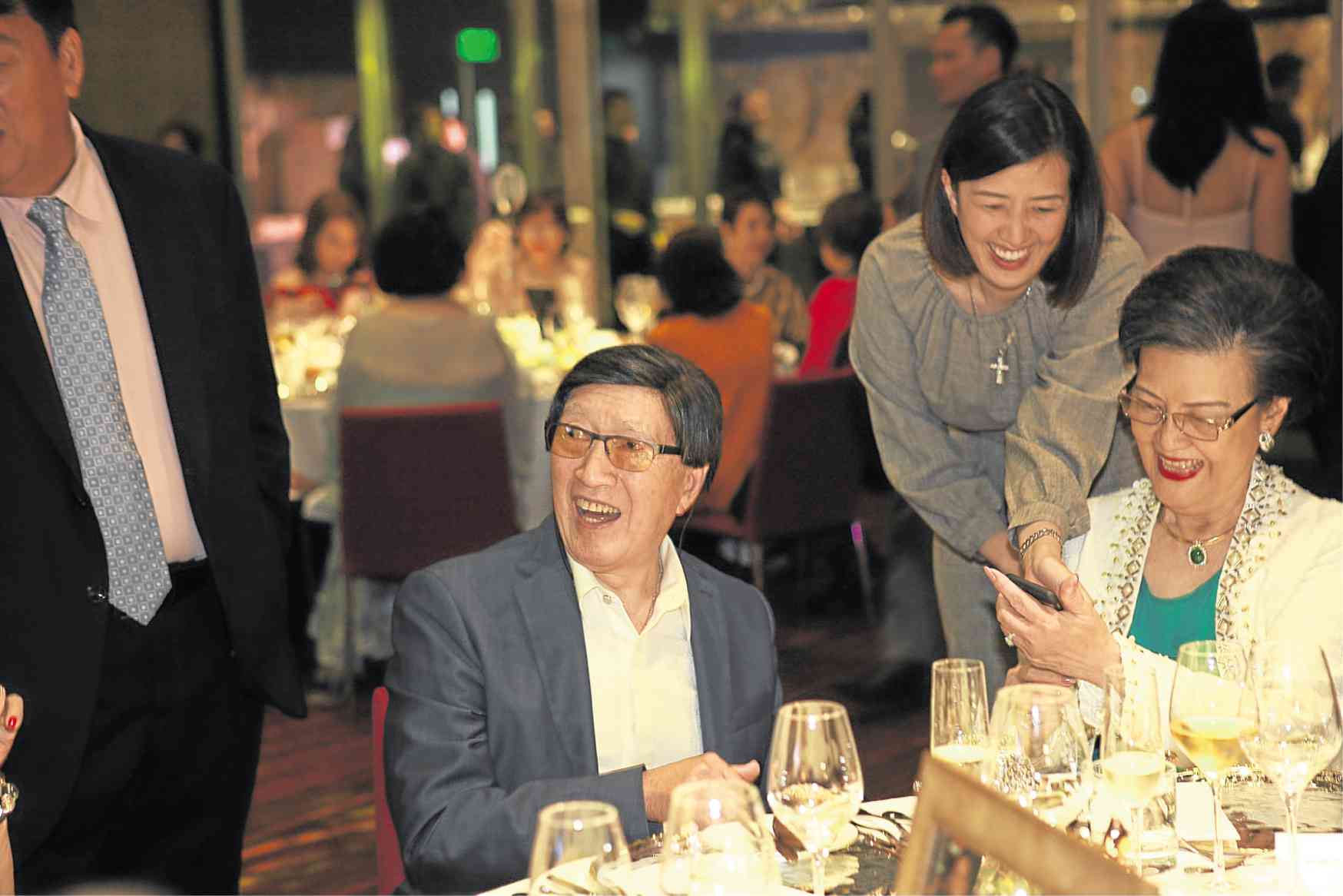 At birthday dinner he attended at Grand Hyatt, George S.K.Ty shares a light moment with wife Mary and daughter Sansan.

George S. K. Ty, group chair of the Metrobank Group of Companies, died on Nov.  23. He was 86. Tomorrow is his interment.

Dr. George S. K. Ty was known to be a gracious host.

Years ago, he would host Metrobank’s annual Gathering of Friends at his residence, welcoming as many as 2,000 guests who converged in the sprawling lawn.

There were no speeches, only a warm welcome and a handshake to greet the guests. A string quartet provided music as guests moved from the tables of Japanese, Chinese, Italian and other international fare, plus lechon and roasted calf on a spit.

Everyone left with a token gift. It was an event people talked about long after it was over.

Another gathering would be held in Binondo for the predominantly Chinese community, who would stay for the raffle after being entertained by local performers.

These events also served what seemed like an unlimited amount of food. While it may have seemed lavish, calculations had been made (which were pretty accurate) so that there would be enough for all to leave satisfied and full.

Dr. Ty was generous but mindful that nothing went to waste and the food was just right with allowances for big appetites and families that tagged along.

Metrobank anniversaries were necessarily occasions for sharing with the community. Besides the checks that were given, Dr. Ty had the recipients enjoy a catered midday repast.

Dr. Ty was a man who appreciated good food and was willing to pay a reasonable price for it. But he was not extravagant. He had said on a few occasions that the cost should never be too much.

It was a philosophy that also determined the Manila Doctors Hospital, which is owned by the Metrobank Foundation. Quality healthcare should be affordable and within the reach of the community. He was into quality and not excesses.

Chinese New Year was always a festive event. He would host dinners for different groups.

The latest one this year was  in the ballroom of  Grand Hyatt,  one of his most recent projects. Dr. Ty was particular about Chinese food. The hotel sourced Chinese chefs from abroad to make sure that the cuisine was authentic and comparable to the best in the world.

A couple of years ago, I came across a Chinese restaurant that I found especially good and mentioned it to him. He chose a four-course dinner, which he finished before giving me his feedback.

It was an education on Chinese cuisine. It did not meet his standards, so I tried to redeem myself and suggested a different selection of food. After my input, he had another dinner arranged but after that, he said he would not return to the restaurant.

However, I was redeemed at a birthday dinner my husband Chito hosted for me at Grand Hyatt Manila. The hotel was not yet in operation, but nonetheless the management accommodated us in the ballroom.

I worked with executive chef Marc Hagen on a four-course menu, with a dramatic reveal from the show kitchen. Dr. Ty showed up with his wife, Mary, and their family.

The kitchen had been advised to serve the food as soon as he arrived, in consideration of his schedule. Dr. Ty did not keep late hours and usually just made an appearance to greet before quietly leaving.

That night, I felt vindicated by the food choices that chef Marc and his team served. Dr. Ty said a few days after that he had enjoyed the food—no buts.

It had been especially nerve-wracking for the kitchen staff who knew that Dr. Ty was not just a regular guest but was actually going to pass judgment on the quality of the food in the hotel that he owned. But they made the grade that night.

Mr. Ty liked to share what he enjoyed. As his daughter, Sansan, put it, he was a man of habit who would order the same food again and again.

Dr. Ty and his wife liked to snack on nuts, as did my husband. Chito would go through the peanuts and pistachios at cocktails.

Once, Dr. Ty removed the dish from within Chito’s reach, remarking, “I invited you to have dinner, not to eat peanuts.”

It was a running exchange between them that was both in jest and an expression of concern. He had taken it upon himself to watch my husband’s food intake to curb a propensity for weight gain.

We did have varied menus, too, especially when we traveled abroad. Dr. Ty took us to a specialty restaurant in Taipei where the only thing served was a particular fish done in many ways.

He had his favorite restaurants in Hong Kong, not necessarily the most fancy, but which served excellent Peking duck. Once, he invited us during Holy Week and we abstained from the delicacy. Dr. Ty took note and there were no more Good Friday meat dinners after that.

He expanded our Chinese cuisine experience, introducing dishes that we might never have tried. Dr. Ty made Chito try a chicken feet delicacy, which he dutifully obliged. It was the first and last time my husband ate it.

During a birthday celebration of one of his grandchildren, there was a beverage stand serving coffee-based drinks. I offered Dr. Ty one of the cold blends, which I liked.

It was his first time to taste the popular coffee drink and he enjoyed it. I later learned that he would order it until he found out that it contained a substantial amount of sugar, so he stopped drinking it altogether.

He was mindful of his health. I heard an anecdote that his preferred food when he dined at home in the evening was a bowl of rice porridge or lugaw. One grandchild who observed this was purported to have told him that the reason he was rich was because he ate only a frugal meal for dinner.

Dr. Ty liked to keep things simple, especially when celebrating his personal milestones. Some years, he would bring the family and a few friends to Hong Kong for an intimate dinner to mark his birthday quietly. Other years, the children and grandchildren would gather in his home and have breakfast miswa around the big round table with a Lazy Susan.

Dr. Ty’s last birthday was celebrated at home with his family. That morning, the people closest to his heart sat around, grateful for his presence.

That was last October, a month before he passed away.

It was a simple meal of a soupy noodle dish and hard-boiled egg. There were two birthday cakes, one with a replica of the Order of the Rising Sun award given by the Japanese emperor a few months back, the other, a three-tier cake in his favorite colors.

His body had been considerably weakened by affliction then, but he was attentive to the people and the conversation going on around him. Even in that condition, his presence still presided over the gathering.

When we visited him again a few weeks later, he served us cakes, nuts and tea. The Chinese tea was something of a ritual between him and Chito—they would have tea every morning in the office.

Our visit was brief as he tired easily, yet when we stood up to leave, he thanked us in a voice that was strong and clear.

We had dined more plentifully before, but that visit, while enveloped in unspoken sadness, left us full of gratitude for the kindness and friendship that flowed from his generous and hospitable heart.