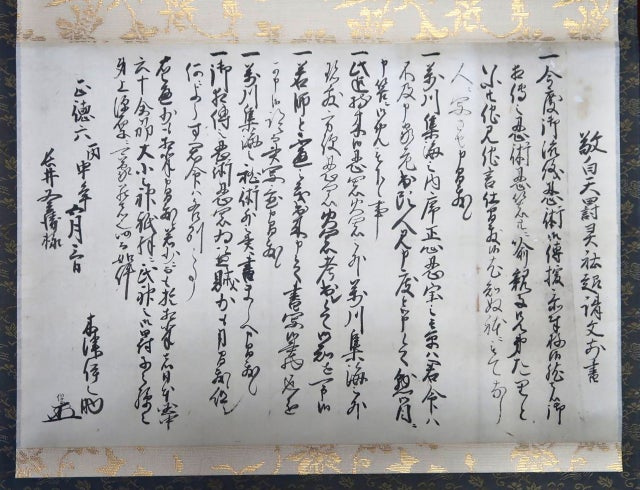 Japanese researchers have uncovered a rare, centuries-old, Ninja oath pledging never to divulge the secrets of their spying and sabotage skills on pain of divine retribution for generations.

Written in cursive calligraphy, the oath contains six promises and was signed some 300 years ago by “Inosuke Kizu”.

Kizu was a Ninja from a clan in Iga, a mountain-shrouded town near the ancient imperial capital of Kyoto.

Expressing gratitude to his superior for passing on “ninjutsu” or “the art of the Ninja”, Kizu pledged he would never pass the knowledge on — even to his children or brothers —and would never use it to steal unless so ordered.

In his oath, the Ninja acknowledges that if he broke the promises even by a little, he’d be punished by “big and small gods in more than 60 provinces across Japan” for generations.

“Thieves and Ninjas did the same thing, sneaking into other people’s houses, but Ninjas prized morality highly,” Takao said.

Also of interest to scholars was a vow in the oath to report to his superiors any new skills, tools or firearms that were not in the “Bansenshukai”, a secretive 17th-century text considered to be somewhat of a Ninja encyclopedia.

Kizu noted he could show only three chapters of the “Bansenshukai” to top-ranking samurais who employed ninjas and vowed not to disclose the book’s contents in other writings.

This interests scholars because “it shows that Bansenshukai was actually becoming used as a textbook,” Takao said, even though it left crucial points vague.

The contents of the multi-volume book are now known to the public but many Ninja traditions remain hidden as important secrets were passed on by word of mouth.

The oath was among some 130 ancient documents left to the university by the 16th head of the Kizu family.

The existence of the oath was unveiled five decades ago in Japan but its whereabouts were unknown until now, according to Takao.

Inosuke, who submitted the oath, was the fifth head and last Ninja from the Kizu family.

The oath document was believed to have been returned to his family after his death, Takao said.

The research center is also based in Iga, some 350 kilometers (220 miles) southwest of Tokyo.

Cooperating with engineering and science departments of Mie University, the institute has been trying to reproduce Ninjas’ legacy including their food and tools. NVG