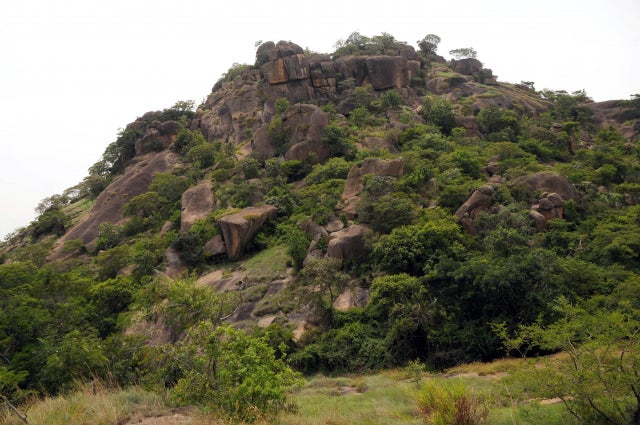 Defying violence, hikers head for the hills in central Nigeria

The old car number plates still carry the inscription beloved of the people of Plateau State in central Nigeria: “Land of peace and tourism”.

Years of spiraling violence have rocked the region of outstanding natural beauty. But tired of the unrest, young hikers have now decided to revive the slogan.

Every weekend, Andrew Niagwan and his friends defy the insecurity to chart new trails and kickstart tourism in the breathtaking lush countryside around the state capital Jos.

“We now have over 60 hiking locations and we are still discovering some more,” Niagwan says as he hikes nearing the top of the Shere Hills, a mountain range that not so long ago attracted tourists from across Nigeria.

Holding a can of white spray paint, Niagwan draws arrows on stones to mark the fresh trail.

Up ahead, a guide hacks through the dense vegetation, his machete flying in great arcs to reveal the path.

“For years, people used to avoid the area, but thanks to us the hiking fever is back,” Niagwan, a tall psychology graduate in his thirties, says proudly.

The nature enthusiast created the Jos Plateau Hikers Club in 2013 with his 82-year-old French friend Yves Gattepaille, who has been walking in the region for decades.

So popular are the excursions that there is a burst of new clubs to keep up with demand.

Now newcomers like “The Hike Team”, “Jos Hike It”, and “The Wayfarers of Jos” are also organizing weekly walks in the hills.

“During the crisis with the curfew we have to stay indoors and the internet has been the best companion,” says 26-year-old hiker Metou Kwallo.

“We are tired of the violence. We can’t be always living in fear.”

Fit for a queen

The fresher micro-climate in Plateau State is an exception in the often suffocating heat of Nigeria.

The otherworldly beauty of the dome-shaped outcrops of rock and established hotels have long made Plateau a favorite holiday resort for rich Nigerians and expatriates.

But in the early 2000s, the tourism market cooled off after bloody outbreaks of violence between Christian and Muslim communities rocked Jos and the surrounding area, killing more than 10,000 people, according to Human Rights Watch.

The Jos area lies at the crossroads of the predominantly Muslim north and largely Christian south and was on the fringes of the Sokoto Caliphate before the British colonized Nigeria.

But the indigenous communities, helped by the mountainous terrain that prevented conquerors from riding through on horseback, resisted the wave of Islamisation from the north.

Instead, Plateau became home to many Christian missionaries arriving from the beginning of the 19th century.

Recent history has again shown that longstanding ethnoreligious grievances can resurface at any moment.

In June, after three years of relative peace, more than 200 villagers lost their lives in massacres blamed on ethnic Fulani herders near Jos, triggering further unrest.

The waves of violence have sunk the local economy, most expatriates have packed up and many businesses have closed, exploding the unemployment rate.

The Hill Station Hotel, once the finest hotel in Jos, is now entombed in dust, while cracks spread across its walls.

“Gone are the days when the Queen of England stayed there,” says Mankat Dewa, a local entrepreneur, recalling the visit of Elizabeth II in 1956, when the hotel still hosted lavish banquets in its lush gardens.

“Jos should be the first touristic site in Nigeria, but the sector has declined because of bad governance and successive crises.”

Aware of the region’s potential, Plateau Governor Simon Lalong said at the beginning of November he wanted to “resuscitate” tourism at a conference on the subject in Jos.

“We are going to focus and put more attention on tourism as a source of revenue for not only Plateau State but also for Nigeria,” he said.

“Instead of Nigerians running to Kenya or (the) U.K. because of their weather, we would do the needful by developing the content and upgrading facilities that are in place.”

Many in Jos, especially young people, seem to agree and are being joined by European and U.S. expatriates for scenic hikes, barbecues and waterfall dips on excursions that sometimes attract hundreds of people.

“Of course, we need to adapt the situation. We avoid areas where attacks took place in the last months,” says Niagwan.

“When we plan to go camping for the weekend, we keep the exact location secret until the very last minute.”

Niagwan’s strategy appears to be working: “So far, we’ve never had an issue.” NVG