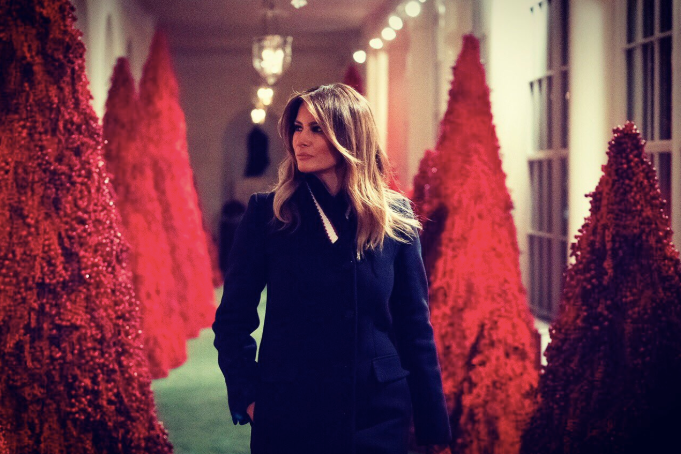 Trump designed the Grand Foyer and Cross Hall to showcase patriotism as part of this year’s White House theme, “American Treasures,” which is about honoring America’s unique heritage, as seen on Twitter on Nov. 26. To exude valor amid the Yuletide season, Trump asked for 29 Christmas trees to be decorated with 14,000 red ornaments.

The People’s House @WhiteHouse is ready to celebrate Christmas and the holiday season! pic.twitter.com/oejKW3mC15

She also shared photos of this year’s décor via Twitter on the same day. “The White House is sparkling for the Christmas season!” she wrote.

The @WhiteHouse is sparkling for the Christmas season! pic.twitter.com/ncNhlkZAWl

What would have been a serious theme for Americans to ponder became a subject for them to laugh at after they saw the red Christmas trees. One netizen, Wendy Smith (@wendyfarrsmith), inverted the trees in the photo to make it look like Trump was walking in what appears to be an automated carwash.

Some put faces on the trees to make them “a little less terrifying.”

I made Melania’s Christmas decor a little less terrifying. pic.twitter.com/VaK5UJpQA1

Others joked that the red trees symbolize the blood of innocents and Trump’s enemies.

Decorator: Okay, so we want to avoid looking like the entrance to the White Witch's Narnian castle like we did last year.

Melania: What about red?

Decorator: Sure, red ornaments are cheerful!

Melania: No. The trees. Red.

I think this is cool, does anyone know where I can get the blood of the innocent to paint my Christmas tree? pic.twitter.com/VRh7t1IqNm

One social media user went as far as to edit the photo to make it look like the trees hid the bodies of “murdered reporters.”

Meanwhile, the red trees reminded some of the iconic blood elevator scene in Stanley Kubrick’s 1980 horror film “The Shining.“

What about 4th of July, we should start planning, any thoughts?
FLOTUS: not yet… pic.twitter.com/KndahYiClb

Others were reminded of red dresses worn by women in the TV adaptation of Margaret Atwood’s dystopian novel “The Handmaid’s Tale.”

I saw this earlier; let me dig through to see who it was. pic.twitter.com/zVxGZGWXHK

Trump addressed the criticisms she received regarding the red Christmas trees during an opioid awareness event at Liberty University in Lynchburg, Virginia, as reported by the Washington Times on Nov. 28.

“I think they look fantastic,” Trump stated, as per the report. “We are in [the] 21st century, and everybody has different taste.” NVG

Melania Trump wears jacket that says: ‘I really don’t care, do u?’